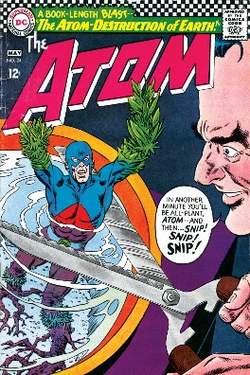 (pop culture)
The Floronic Man, originally called Plant Master (Plant-Master), has a history as long and leguminous as a wisteria. The creature sprouted in The Atom #1 (1962) in a story by writer Gardner Fox and artist Gil Kane. Woodrue, a political extremist from an otherworld of wood nymphs and floral spirits, is banished to Earth for punishment for his supremacist activity. Taking on the human identity of botany professor Jason Woodrue, he channels his animosity toward his home planet into research and, in true supervillainous fashion, initiates a “plant-conquest of Earth,” an effort fortunately pruned by the Tiny Titan. Woodrue's propensity for lab experiments and a desire for revenge took him to the extreme of investigating human/plant hybridization. It was during one of these endeavors that student botanist Pamela Isley was turned into Poison Ivy (in director Joel Schumacher's 1997 movie Batman & Robin, John Glover played Woodrue in Poison Ivy's origin sequence). Other academic prodigy included Susan Linden (Black Orchid) and Alec Holland (the human template for Swamp Thing). Woodrue ultimately perfected a serum that allowed him to transform into a plant-based life form, dubbing himself the Floronic Man, complete with pliable, bark-like skin, wooden bones, and green leaves that grow in place of hair. Because he now appeared inhuman, he developed a sprayon synthetic skin that allowed him to masquerade as a human being. This super-strong, red-eyed mutation—whose powers include control over plants and the ability to communicate with them—was a member of the Secret Society of Super-Villains in the late 1970s. He repeatedly tangled with the Atom, as well as the second Green Lantern and—in a celebrated Alan Moore–scripted storyline—Swamp Thing. As Floro, he briefly tried to redeem himself as a member of the New Guardians, an evolved hero team chosen to lead humankind. In the 2005 JLA story arc “Crisis of Conscience,” he reunited with a cadre of former Secret Society members for a vengeful attack against the Justice League.
The Supervillain Book: The Evil Side of Comics and Hollywood © 2006 Visible Ink Press®. All rights reserved.

Feedback
Flashcards & Bookmarks ?
Please log in or register to use Flashcards and Bookmarks. You can also log in with
Flashcards ?
My bookmarks ?
+ Add current page to bookmarks
Mentioned in ?
References in periodicals archive ?
As true embodiment of the Green's desires, Swamp Thing rises--"awakens" from the Green--to confront the Floronic Man. He defeats him by breaking his arm, which, after all, is only bone.
There is a great deal of reflexivity in the Floronic Man's madness.
Embracing Dionysius in Alan Moore's Swamp Thing