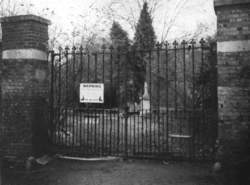 The Highgate Vampire was sighted several times at the cemetery’s North Gate.

One of the more interesting interludes in vampire history concerns events that took place at a cemetery in the Highgate section of London during the years 1967 to 1983. The cemetery, officially called the Cemetery of St. James, was consecrated by the bishop of London in 1839, four days before Queen Victoria’s 20th birthday. It gained some association through its slightly disguised use by Bram Stoker as the burial place of Lucy Westenra, after her death (as a result of Dracula‘s attacks). The modern story of vampires at Highgate began with reports of a phantomlike entity seen in the cemetery in the evenings. While rumors of a ghost circulated, occultist and head of the Vampire Research Society, Sean Manchester received the account of schoolgirl Elizabeth Wojdyla and her friend, who claimed to have seen some graves open and the dead rise from them. Wojdyla also reported having nightmares in which something evil tried to come into her bedroom. Over several years, Manchester collected similar accounts of unusual sightings associated with the cemetery. In 1969 Wojdyla’s nightmares returned, except now the malevolent figure actually came into her room. She had developed the symptoms of pernicious anemia and on her neck were two small wounds suggestive of a classic vampire’s bite. Manchester and Elizabeth’s boyfriend treated her as a victim of vampirism and filled her room with garlic, crucifixes, and holy water. She soon improved. Meanwhile, various people continued to add new reports of seeing a ghostly being in the cemetery.

Because they were of a common sort, no one probably would have heard of the Highgate reports had not signs been found that the cemetery and a nearby park were being used for rituals that involved the killing of animals. Some of the dead animals had been drained of blood, and the local newspaper asked in its headline, “Does a Wampyr Walk in Highgate?” Manchester then reported that he had been contacted by another woman who had the same symptoms as Wojdyla. The young woman, followed while sleepwalking, led Manchester to a cluster of burial vaults in the cemetery. Manchester told the press that he believed a genuine vampire existed at Highgate and should be dealt with accordingly. The newspaper story and a subsequent feature spot on the independent Thames TV led to the cemetery becoming a gathering point of the curious. A group of amateur filmmakers used it as the site for a film, Vampires by Night. On Friday, March 13, 1970, before an assembled crowd of onlookers, Manchester and two cohorts entered the vault where three empty coffins were found. They lined the coffins with garlic, and in each they placed a cross. The vaults were sprinkled with salt (used for exorcisms) and holy water.

Events turned nasty in August when the body of a young woman was found at the cemetery. It appeared that someone had treated the corpse as a vampire and had decapitated and tried to burn it. An enraged citizenry demanded that the authorities protect the bodies of loved ones from abuse. Before the month was out, the police arrested two men who claimed to be vampire hunters. The men were a factor in the souring relationship between Manchester and the police. But while the police were distracted by the amateur vampire hunters, Manchester had quietly entered another vault and discovered what he believed was a real vampire. Rather than mutilating the body (a crime in England), he read an exorcism and sealed the vault with cement permeated with pieces of garlic.

In the summer of 1970, David Farrant, another amateur vampire hunter, entered the field. He claimed to have seen the vampire and went hunting for it with a stake and crucifix—but was arrested. He later became a convert to a form of Satanism. He was later convicted on two charges of breaking into tombs at Highgate. In 1978 he denounced the vampire as a hoax he had created by himself in 1970. Manchester quickly responded, noting that the reports originated prior to Farrant’s involvement and that he was not privy to the incidents that had made the Highgate vampire so newsworthy.

Meanwhile, in 1977, Manchester began an investigation of a mansion near Highgate Cemetery that had a reputation of being haunted. On several occasions Manchester and his associates entered the house. In the basement they found a coffin, which they dragged into the backyard. Opening the casket, Manchester saw the same vampire he had seen seven years before in Highgate Cemetery. This time he conducted an exorcism by staking the body, which disintegrated into a slimy, foul-smelling substance, and burned the coffin. He had destroyed the Highgate Vampire. Soon after this incident, the mansion was demolished and an apartment house was erected in its place.

The consequences from the Highgate Vampire did not end with its death, however. In 1980 reports of dead animals found drained of blood began to appear in Finchley. Manchester believed that a vampire created by the bite of the Highgate Vampire was the cause. He contacted many of the people he had met in 1970 and eventually targeted a woman he called Lusia as the culprit. He discovered that Lusia had died and been buried in Great Northern London Cemetery, and he had dreams in which she came to him. One autumn evening in 1982, Manchester entered the cemetery. There he encountered a large, spiderlike creature about the size of a cat. He drove a stake through it. As dawn approached, it metamorphosed into Lusia—she had only now truly died. He returned her remains to the grave, thus ending the case of the Highgate Vampire. Manchester wrote an account of his perspective on The Highgate Vampire (1985; Revised 1991), upon which he expanded in the The Vampire Hunter’s Handbook (1997), and the Vampire Research Society offers a cassette tape concerning the incident. Meanwhile, David Farrant founded The Highgate Vampire Society (http://www.davidfarrant.org/) and has continued to present his side of the story in a series of booklets, the most recent appearing in 2002.

Feedback
Flashcards & Bookmarks ?
Please log in or register to use Flashcards and Bookmarks. You can also log in with
Flashcards ?
My bookmarks ?
+ Add current page to bookmarks
Mentioned in ?
References in periodicals archive ?
In 1970 Manchester published The Highgate Vampire. Farrant came back with his publication of Beyond The Highgate Vampire.
Stories about the Highgate vampire got so out of control that on Friday March 13, 1970, an ITV special report about the cemetery prompted an angry mob to descend on Highgate, determined to rid their town of the vampire tormenting local residents.
The hunt for a vampire in Highgate Cemetery that led to a real magician feud; The 70s was a pretty crazy time, but these guys took it to another level
The Highgate Vampire The famous statue of Karl Marx is scary enough, but in 1969 Highgate Cemetery in North London was the location for a vampire scare.
Mystery of the OF BRUM! VAMPIRE; How Bram Stoker's Dracula has seeped into modern folklore
The course went through haunted landmarks of London including the place where the Highgate vampire is said to be and also Fleet Street, where the demon barber awaits.
SPOOKY NIGHT TIME CYCLE RIDE
Three years later, Vampire Research Society chief Sean Manchester found what he believed to be the body of the Highgate vampire in a casket beneath a derelict house.
THE REAL X-LIFE FILES!