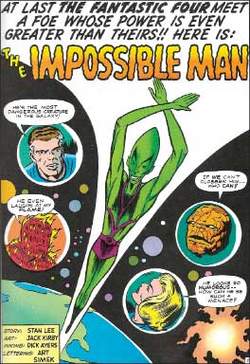 (pop culture)
The Impossible Man—a not-so-little green man with a cucumber-shaped head—first popped into comics in Fantastic Four #11 (1963). Stan Lee and Jack Kirby's story opens with an exuberant extraterrestrial arriving on holiday from the planet Poppup, a hazardous world where its inhabitants rearrange their molecules into any shape imaginable (making a loud “Pop!” sound in the process). This nameless being (“We Poppupians have no names! We know who we are!”) frolics through New York City, impudently morphing to indulge his every whim, breaking laws along the way. The FF responds typically—the Thing punches, the Torch ignites, and Invisible Girl pulls a disappearing act—with “the Impossible Man” (as the flustered Thing dubs him) countering their attacks—sprouting spikes, turning into a giant water balloon, and clustering the vanishing vixen with flower petals. After perilous transformations into a giant buzz-saw and a bomb elevate the Impossible Man's menace, Mr. Fantastic brainstorms the way to defeat him— by ignoring him. Jaded “Impy” rockets away (by becoming a rocket), pledging to tell his fellow Poppupians to avoid the “dull” planet Earth. Were the FF so lucky. The Impossible Man has occasionally returned over the decades, even demanding that Marvel Comics award him his own title (in FF #176, 1976). After Galactus devoured Poppup (welcomed by its dispirited denizens, incidentally), the surviving Impy used his race's ability to reproduce by mitosis to fashion a “mate”—the Impossible Woman—followed by offspring. Although the Impossible Man finally got his own comic (two summer one-shots, in 1990 and 1991), to Marvel's credit this oddball character has been used judiciously, never overstaying his welcome. He popped onto the tube for guest shots in the 1978 and 1994 Fantastic Four animated programs.
The Supervillain Book: The Evil Side of Comics and Hollywood © 2006 Visible Ink Press®. All rights reserved.

Feedback
Flashcards & Bookmarks ?
Please log in or register to use Flashcards and Bookmarks. You can also log in with
Flashcards ?
My bookmarks ?
+ Add current page to bookmarks
Mentioned in ?
References in periodicals archive ?
CAIRO -- 18 November 2018: Famed Egyptian star Kareem Abdel Aziz decided not to play the leading role in the film "Al-Ragol el-Mostahel" (The Impossible Man) based on Nabil Farouk's famed novel of the same name.
Kareem Abdel Aziz rejects 'Al-Ragol el-Mostahel'