The Invaders | Article about The Invaders by The Free Dictionary
https://encyclopedia2.thefreedictionary.com/The+Invaders
Printer Friendly 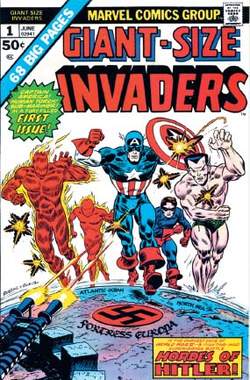 Considering how all-pervasive superhero teams have become since the 1960s, it is surprising that there were so few around in the 1940s. DC Comics had the Justice Society of America and the Seven Soldiers of Victory, and Fawcett had the Marvel Family, but Marvel Comics itself managed to produce precisely two stories of its sole adult team, the All-Winners Squad (though, of course, their kid gangs, such as the Young Allies and the Tough Kid Squad, thrived). The All-Winners Squad appeared in All-Winners Comics #19 and #21, in late 1946. The comic consisted of Marvel’s “big three” heroes, the Sub-Mariner, the Human Torch, and Captain America; the latter two’s sidekicks Toro and Bucky; and two lesser-known heroes, the Whizzer and Miss America. Years later, longtime fan and writer, Roy Thomas, remembered how effective the combination of the big three had been and used them again, in a time-travel issue of The Avengers (#71, 1969), pitting the 1940s and 1960s heroes against each other.

In 1975, looking around for a new project, Thomas decided to revive the concept of the All-Winners Squad (minus the Whizzer and Miss America) and to create new, untold tales of the heroes in their World War II prime. Thomas used the team, now christened the Invaders (which he reasoned sounded less embarrassing than “All-Winners Squad”) to fill in gaps or correct lapses in old continuity, reintroduce forgotten heroes of the Golden Age (1938–1954), and create his own wartime characters. The result was one of the most action-packed, hero-packed, and fun-packed comics of the 1970s.

For art, Thomas turned to industry veteran Frank Robbins, who had been drawing the Johnny Hazard newspaper strip for decades and could provide just the right mixture of authentic period detail and slam-bang action. The team’s first adventure appeared in Giant Sized Invaders #1 but, soon after, the decision to reduce its page count to that of a regular comic meant that its second issue was just plain Invaders #1—back then not many comics could boast of having two #1 issues! The team’s origin was quite simple: All five members meet by coincidence, hot on the trail of the Nazis’ answer to Captain America, Master Man (the first of many wonderfully kitsch villains), and are persuaded to stay together as a team by none other than Winston Churchill.

Over the course of forty-one issues, one annual, and several crossovers and guest appearances, the Invaders traveled the world, from the home front to a blitzed London to Egypt, Berlin, and even the Warsaw ghetto. Among the outlandish villains they trounced were Brain Drain, U-Man, Baron Blood (an aristocratic vampire), Blue Bullet (a man wearing a giant bullet costume), Warrior Woman, Frankenstein and—of course— Adolf Hitler. The first new heroes to appear, the Liberty Legion, were in fact a round-up of some of Marvel’s many short-lived (not to say forgettable) wartime zeroes: the Red Raven, the Thin Man, Jack Frost, the Patriot, and Blue Diamond. These were joined by those leftover All-Winners, Miss America and the Whizzer. The Legion was actually introduced in 1976 in Marvel Premiere #29, and then crossed over to the Invaders, before guest-starring with the Thing for a couple of Marvel-Two-in-One yarns. Plans for their own comic went as far as drawing up a first issue, but that was abandoned; though much later the Whizzer and Miss America were promoted to full-time Invaders, thus reuniting the original All-Winners Squad.

Other Thomas creations included Lord Farnsworth, a.k.a. Union Jack (a British hero of World War I), his daughter Jacqueline (who gained superspeed to become the Spitfire), and her brother Brian, who was first the Destroyer—an-other Golden Age Marvel hero—before taking over the Union Jack costume from his now aged father. Toward the end of the comic’s first run, Thomas created a new, racially mixed kid group called the Kid Commandos, composed of Bucky, Toro, the Human Top, and Golden Girl. This particular Golden Girl was no relation to Captain America’s erstwhile companion; she was, rather, comics’ first Japanese American heroine. Indeed, this team’s creation grew out of one of the war’s most controversial episodes: the internment of America’s Asian community.

Frank Robbins left the Invaders at the point of creation of the Kid Commandos, in issue #28, which was a blow from which the title never recovered; it was canceled with issue #41 in late 1979. Thomas returned for one last hurrah with a 1993 Invaders miniseries, which added the Thin Man to the team and re-introduced two of the company’s longer-lasting Golden Age superheroes: the Angel and the Blazing Skull.

The series The New Invaders (2004–2005) showcased a team that included both contemporary heroes, such as U. S. Agent and the present day Union Jack, and Timely heroes including the Blazing Skull, the original Human Torch, and the Thin Man. Another Golden Age hero, the Fin (created by Bill Everett), was a guest star.

Another recent comics series, The Twelve (2008), written by J. Michael Straczynski, brings back twelve more Golden Age Timely heroes into the present day: the Blue Blade, the Golden Age version of the Black Widow, Captain Wonder, Dynamic Man, the robot Electro, the Fiery Mask (created by Joe Simon), the Laughing Mask, Master Mind Excello, Mister E, the Phantom Reporter, Rockman, and the Witness, who was one of the earliest co-creations by Stan Lee. —DAR & PS

Feedback
Flashcards & Bookmarks ?
Please log in or register to use Flashcards and Bookmarks. You can also log in with
Flashcards ?
My bookmarks ?
+ Add current page to bookmarks
Mentioned in ?
References in classic literature ?
The dust grew thicker and thicker, and the throats and eyes and noses of the invaders were filled with it.
View in context
On some flimsy pretext or other Mowanna, the king of Nukuheva, whom the invaders by extravagant presents cajoled over to their interests, and move about like a mere puppet, has been set up as the rightful sovereign of the entire island--the alleged ruler by prescription of various clans, who for ages perhaps have treated with each other as separate nations.
Many of the Tahitians were at first disposed to resort to arms, and drive the invaders from their shores; but more pacific and feebler counsels ultimately prevailed.
View in context
At the same time spears and arrows began to fall among the invaders. At Sheldon's command, the Tahitians and Poonga- Poonga men got into action with their rifles.
In the centre, crouched before a slow-smoking fire, in the littered ashes of a thousand fires, was an old man who blinked apathetically at the invaders. He was extremely old--so old that his withered skin hung about him in loose folds and did not look like skin.
View in context
But I did not consider these points at the time, and so my reasoning was dead against the chances of the invaders. With wine and food, the confidence of my own table, and the necessity of reassuring my wife, I grew by insensible degrees courageous and secure.
View in context
The yeomanry had risen upon the invaders and driven them back."
View in context
My home, thank God, is as yet outside their lines; my wife and little ones are still beyond the invader's farthest advance."
View in context
But should domestic tyranny oppress us, or the invader's step pollute our soil, still may the Gray Champion come, for he is the type of New England's hereditary spirit; and his shadowy march, on the eve of danger, must ever be the pledge, that New England's sons will vindicate their ancestry.
View in context
but supposing the invader of domestic bliss to betake himself away at the first rush of the harem's lord, then is it very diverting to watch that lord.
View in context
If you are anxious to fight, you should not go to meet the invader near a river which he has to cross.
View in context
Hence it is necessary the invaders stop futile insistence upon continuation of occupation and instead adopt an honorable withdrawal policy so that the cause of conflict is removed and path for a solution opened.
Increasing influence of Mujahideen over Districts