The Jester | Article about The Jester by The Free Dictionary
https://encyclopedia2.thefreedictionary.com/The+Jester
Printer Friendly


Also found in: Dictionary, Thesaurus.
Related to The Jester: XERXES 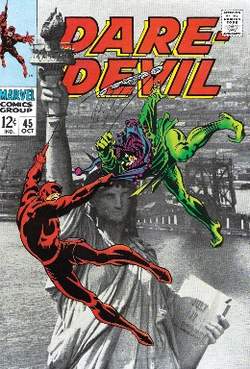 (pop culture)
The Jester is accustomed to bad reviews. First seen in Marvel Comics' Daredevil vol. 1 #42 (1968), written by Stan Lee and drawn by Gene Colan, the Jester is secretly thespian Jonathan Powers, whose critically panned stage turn as Cyrano de Bergerac draws the final curtain after a dismal opening-night performance. After a brief stint as a costumed clown on a children's television show, Powers, whose ego far outweighs his talent, hogs the crime spotlight as the hateful harlequin, the Jester. Pummeled by the Jester's pouch of perilous playthings—including a bola yo-yo, knockout gas-spraying flying discs, exploding bouncing balls, a high-voltage artificial hand, and deadly jacks—Daredevil discovers that this mirthful menace is no laughing matter. Some comics readers have dismissed the Jester as a Joker rip-off. Aside from their visual similarities (and the noir-ish milieus of their adversaries), these criminal clowns share little in common. The Joker's crimes are often rooted in madness, whereas the Jester's vendettas against Daredevil display methodical cunning. His obsession with image has led the Jester to malign Daredevil's reputation through orchestrated media manipulation, and when that fails, the Jester has been known to threaten the Man without Fear with his fencing and gymnastic expertise. Although he has teamed with Daredevil foes Mr. Hyde and Cobra as the Trio of Doom, the Jester is most effective when working alone, as Daredevil has too frequently discovered over the years. This was the second Marvel supervillain to use the name “Jester,” the first being an unrelated character in Captain America #65 (1948). Neither of Marvel's Jesters should be confused with the Golden Age (1938–1954) superhero of the same name, seen in issues #22–#85 of Smash Comics.
The Supervillain Book: The Evil Side of Comics and Hollywood © 2006 Visible Ink Press®. All rights reserved.

Feedback
Flashcards & Bookmarks ?
Please log in or register to use Flashcards and Bookmarks. You can also log in with
Flashcards ?
My bookmarks ?
+ Add current page to bookmarks
Mentioned in ?
References in periodicals archive ?
The Jester claims to have taken over a shortwave 50-kilowatt radio station in the city of Kanggye.
Hacker Allegedly Infiltrates North Korean Radio Station, Plays 'The Final Countdown'
The jester replied in a quiet tone, "Sorry, Your Majesty, I thought that you were the Queen." The king became more angry, but the jester said to him, "Was that not what you ordered me to do?
Get to know Emirati proverbs
Along with his assistant, the Jester, they provide an engaging mix of the thought provoking and the humorous.
Agard, John: Playing The Ghost Of Maimonides
"I would go into the local shop and they'd say 'here comes the jester'."
IT'S NOT JESTER JOB TO RUSSEL; executioner With an on hand at the job interview, it's a serious business playing the fool
"I was just walking around and talking to shopkeepers and they all called me the jester. I have been a professional juggler and entertainer all over the world for the last 15 years."
Town's first jester for 700 years
HIDDEN MYSTERIES TO SOLVE The Jester Out and Jester In perform at the Festival of Fools at Alnwick Garden
FAMILIES TO SEE CHRISTMAS IN A NEW LIGHT AT GARDEN
In the 1700s came the Harlequin, a type of clown quite different from the jester. The Harlequin's act was that of a prankster who played tricks on other clowns.
Clowns of long ago
JESTER QUEST: Kids will 'tri' to follow the clues from the jester on the Tempest Tricycle.
Quest's a summer stormer; TheDailyPreview
"The Jester and the Sages: Mark Twain in Conversation with Nietzsche, Freud, and Marx" discusses a potential conversation between Mark Twain and these four men, who despite sharing a similar role throughout the nineteenth and early twentieth centuries, never truly met.
The Philosophy Shelf
The Jester From Leicester hadn't said a word and looked bemused - the jesters in the gantry were responsible for the mirth.
Snooker commentators' wisecracks are no laughing matter; PALMER'S TV BELCH