The Joker | Article about The Joker by The Free Dictionary
https://encyclopedia2.thefreedictionary.com/The+Joker
Printer Friendly 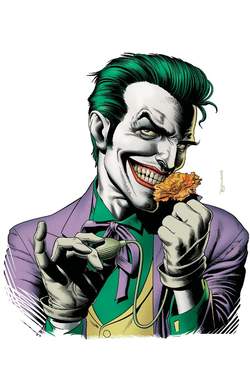 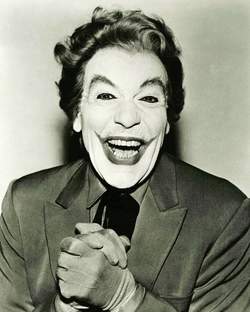 As the Joker, Cesar Romero (with visible mustache) laughed his way through Batman's three TV seasons and one theatrical movie.

Feedback
Flashcards & Bookmarks ?
Please log in or register to use Flashcards and Bookmarks. You can also log in with
Flashcards ?
My bookmarks ?
+ Add current page to bookmarks
Mentioned in ?
References in classic literature ?
In his expostulation he dropped his cleaner hand (perhaps accidentally, perhaps not) upon the joker's heart.
"Call wine, wine; and finish there." With that advice, he wiped his soiled hand upon the joker's dress, such as it was--quite deliberately, as having dirtied the hand on his account; and then recrossed the road and entered the wine-shop.
View in context
He made his way through the press, saying to the joker: `Mille barbes!
"Well, monsieur, my Menneville spitted the joker, to the great astonishment of the spectators, and said to the cook: -- `Take this goose, my friend, it is fatter than your fowl.' That is the way, monsieur," ended the abbe, triumphantly, "in which I spend my revenues; I maintain the honor of the family, monsieur." Fouquet hung his head.
View in context
The joker spent the remainder of the night, after church, in the cellar of a deserted house, and Nicodemus sat on the cellar door till toward breakfast-time to make sure that the prisoner remembered that if any noise was made, some rough treatment would be the consequence.
View in context
"It means, my dear friend," explained the Woggle-Bug, "that our language contains many words having a double meaning; and that to pronounce a joke that allows both meanings of a certain word, proves the joker a person of culture and refinement, who has, moreover, a thorough command of the language."
View in context
Love was the king card of trumps, the fifth ace, the joker in a game of tenderfoot poker.
View in context
During the whole time he was speaking, the queen appeared to be well pleased with the coadjutor's harangue; but terminating as it did with such a phrase, the only one which could be caught at by the jokers, Anne turned around and directed a glance toward her favorites, which announced that she delivered up the coadjutor to their tender mercies.
View in context
Every day we see something new in this world; jokes become realities, and the jokers find the tables turned upon them."
View in context
Summary: Washington DC [USA], Jun 3 (ANI): The twisted relationship between Harley Quinn and the Joker has been one of the most talked about subjects since Harley was introduced in 'Batman: The Animated Series' in 1992.
DC announces new comic book 'Joker/Harley: Criminal Sanity'
Also&nbsp;in the trailer is Thomas Wayne, Bruce Wayne's father, who is believed to play an important part in the Joker's.
First 'Joker' Trailer Draws Positive Response From Fans, Critics