The New Gods | Article about The New Gods by The Free Dictionary
https://encyclopedia2.thefreedictionary.com/The+New+Gods
Printer Friendly 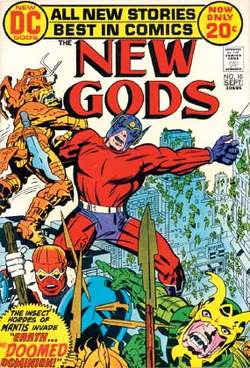 Jack Kirby was, undoubtedly, one of the most important creators ever to work in comics. Comics historian Mike Benton called him “the American artist who best represents what comic books are all about.” Kirby’s many creations (with writer Stan Lee) for Marvel Comics in the 1960s reinvigorated the entire industry. When DC Comics boss Carmine Infantino lured Kirby away from Marvel in 1970 with the promise of total artistic freedom, it was surely the coup of the decade. Kirby set himself up with his own editorial office in California and effectively created his own line of interconnected comics, which have now come to be known as the Fourth World series. Three titles premiered in 1971—The New Gods, The Forever People, and Mister Miracle—to which was added Kirby’s eccentric vision of Superman’s Pal Jimmy Olsen, which he had picked up at DC’s insistence. Every two weeks, one of the four titles would hit the streets with a new installment of its story, written, drawn, and edited by Kirby, at a punishing work rate that only he could have met.

The New Gods would become the central book of the tetralogy, with a story in issue #7, “The Pact,” at last explaining how the various comics all knitted together. The story details the stormy conflict between two far-off planets: the Eden-like New Genesis and the monstrous Apokolips. To cement peace between the two worlds, their leaders—Highfather of New Genesis and Darkseid of Apokolips—exchange newborn sons, Scott Free and Orion, as hostages against hostilities ever resuming. Some years later, Darkseid learns of something called the Anti-Life Equation (about which Kirby was always rather vague; suffice it to say that it was something terrifying), which was hidden on Earth, and he heads off, with numerous evil (and bizarre) minions in tow, to find it, setting off a new war of the “gods” with humanity in the balance.

The four comics each had different approaches to the ongoing tale. The New Gods starred Orion, recently arrived on Earth with his devil-may-care colleague Lightray, and was the most wide-ranging and bombastic of the Fourth World series, featuring colossal battle scenes and panoramic artwork. As the son of the evil Darkseid, Orion was an unusually complex, savage hero, despite his peaceful upbringing on New Genesis, and The New Gods explored his constant battle with both his father’s minions and his own explosive lineage. The other exchanged son, Scott Free, also came to Earth, fleeing his militaristic upbringing on Apokolips, and assumed the identity of top escape artist Mister Miracle. Complete with cantankerous and diminutive assistant, Oberon, and statuesque, ex-stormtrooper girlfriend (and future wife), Big Barda, a fellow Apokolips escapee, Mister Miracle was a more lighthearted and traditional superhero title.

The Forever People were five happy-go-lucky teenagers from New Genesis: Mark Moonrider, Beautiful Dreamer, Big Bear, Vykin the Black, and Serifan. They could merge together to form a superpowered fighter called the Infinity Man. Like Orion and Mister Miracle, the Forever People were on Earth to fight Darkseid, but they were younger and more idealistic, and, in some ways, were Kirby’s take on the hippie movement. Jimmy Olsen was the most eccentric of the titles. In it, Jimmy and Superman teamed up with a new Newsboy Legion and Guardian (made up of the sons of the 1940s kid gang of that name and the clone of their superhero protector), and with renegade bikers called “the Hairies,” to fight Darkseid’s scientists. It was Kirby’s most prophetic series—anticipating developments in DNA research, cloning, and the Internet—as well as his most bizarre, featuring alien vampires, miniature Jimmy Olsens, the Loch Ness monster, and comedian Don Rickles and his invented double “Goody Rickels.”

The Fourth World was the most complete expression of Kirby’s limitless imagination and the finest example of his monumental, explosive art. These comics were replete with double-page spreads, panoramic cosmic vistas, almost unimaginable creatures, and kinetic fight scenes. Kirby peopled the strips with as strange a collection of villains as comics have ever seen: Granny Goodness, Verman Vunderbar, Glorious Godfrey, Mantis, Desaad, Darkseid’s son Kalibak, and the Black Racer (the bringer of death, who propels himself through the air on skis!). Some readers hailed the series as a masterpiece, but others found it was more than they could take in, and sales were not what DC had hoped for. The series came to an end in 1972, except for Jimmy Olsen and Mister Miracle, which carried on until 1974. Kirby’s series Kamandi, The Last Boy on Earth (which premiered in November 1972) proved to be more popular initially, but it has been his Fourth World stories that live on in the imagination.

Five years later, in 1977, both The New Gods and Mister Miracle were creditably revived (though not by Kirby), with the latter in particular proving to be of the highest quality, but both were gone again within the year, setting the pattern of revivals for years to come. The first run of The New Gods was collected together in a glossy miniseries in 1984. As his last major work in comics, Kirby wrote and drew the graphic novel The Hunger Dogs (1985), in which he provided the ending to his “Fourth World” saga, that he had not been allowed to complete twelve years earlier.

That same year, Mattel launched a series of toys called the Super Powers (which spun off into a series of comics also drawn by Kirby), featuring numerous DC characters, including Darkseid. Kirby had wanted to end his series with a sequence of deaths, but the toy company was against the idea. Nevertheless, the toys and the Super Powers comic demonstrated that Darkseid himself may have been Kirby’s greatest gift to DC, as the great, all-purpose villain that the company had so patently lacked before. Subsequent battles with the Legion of Super-Heroes and Superman, among others, have only served to confirm that conclusion. It was also in 1984 that Dark-seid first appeared in animation, in television’s Super Friends: The Legendary Super Powers Show, voiced by Frank Welker.

From the late 1980s to 2004, there have been four New Gods/Orion series, two Mister Miracle revivals, and a single series of The Forever People, all with varying commercial and critical success. What none has been able to do is to build substantially on Kirby’s originals. In fact, he created so many characters that there is still scope for further exploration for many years to come, as more and more fans of his work become professionals. Two fans, Paul Dini and Bruce Timm, introduced the Fourth World concepts into their acclaimed Warner Bros. cartoon, The Adventures of Superman, which used parts of The New Gods #7 in its storyline; later on, Timm’s creative team showcased more Fourth World characters on the Justice League animated series. Michael Ironside was the voice of the animated Darkseid, with Ron Perlman (Hellboy) as Orion, Ioan Gruffudd (Fantastic Four) as Mister Miracle, Robert Morse (Mad Men) as Desaad, Michael Dorn (Star Trek: The Next Generation) as Kalibak, Arte Johnson (Laugh-In) as Virmin Vundabar, and Edward Asner (Lou Grant) (!) as Granny Goodness. Darkseid later appeared in “Darkseid Descending!”, an episode of the animated series Batman: The Brave and the Bold, and as the principal villain in the direct-to-video animated film Superman/Batman: Apocalypse (2010), voiced by Andre Braugher.

In the comics, the New Gods were supposedly killed off in a story line that ran through Countdown to Final Crisis (2007–2008), and Death of the New Gods (2007–2008). But, predictably, they were soon resurrected in the series Final Crisis (2008–2009). A computer-animated Darkseid was the prime villain of the final season of the live action television series Smallville, in which his minions Desaad, Glorious Godfrey, and Granny Goodness, also appeared, played by real actors.

Some writers have suspected that the Fourth World was the inspiration for an even more famous property, Star Wars. George Lucas is a known comics fan, and the similarities between the two series are striking (like Lucas’s Force and Kirby’s Source), with the dark, evil father Darth Vader/Darkseid, fighting his long-lost son Luke Skywalker/Orion, who was trained by a benign, bearded mentor, Obi-Wan Kenobe/Highfather. Even the Death Star had a more than passing resemblance to Apokolips, but until Lucas confirms or denies the connection it must remain merely an intriguing theory. —DAR

Feedback
Flashcards & Bookmarks ?
Please log in or register to use Flashcards and Bookmarks. You can also log in with
Flashcards ?
My bookmarks ?
+ Add current page to bookmarks
Mentioned in ?
References in periodicals archive ?
Replacing them with the likes of Cyborg, the Eternals or the New Gods is going to take a lot more origin movies and strategically planned crossovers, and many punters simply won't have the appetite.
Are superheroes in danger of hanging up their capes?
In the first series, we saw Shadow Moon, an ex-con played by Ricky, get caught up in the middle of a war between the new gods and the old gods, thanks to his mysterious boss Mr Wednesday (Ian McShane).
It's time for me to cast my Shadow; the big interview; Ricky Whittle on how his character starts questioning everything in season two of smash-hit fantasy
Both Abdullahi and Hafsat are lost in the desultory promises from the new gods in their lives, just like millions of Nigerians, who are now approaching the coming presidential race as a battle of the gods.
Buhari, A Worry; Atiku, A Concern
Wednesday is rallying other members of a group of Old Gods against the New Gods, gods of technology, media, and globalization, so that they will not lose their power further.
Neil Gaiman's American Gods: A postmodern epic for America
LOS ANGELES (AFP) - Director Ava DuVernay, the first African-American woman to helm a film with a budget over $100 million, will now take on superhero film "The New Gods," sources said.
Ava DuVernay to direct DC Comics superhero film
Wednesday (Ian McShane), and enters a world where the New Gods like technology and Media clash with the Old Gods, which are trying to rebuild their influence in the world.
10 Shows To Watch While Waiting For 'Game Of Thrones'
As the mouthpiece of the new gods, Gillian's Media takes the form of Marilyn Monroe, Judy Garland, Lucy Ricardo (Lucille Ball's beloved TV character) and even David Bowie.
Gillian Anderson morphs from Scully to Monroe, Garland, Ball and even Bowie
Smoking a toad-skin vape, the Technical Boy's entry establishes the core plot of the show - a war brewing between the old and the new gods.
American Gods is nothing like anything we've seen before
“When we launched the new Gods of Egypt game, which has a bonus game where players try to guess which of three jars in the pharaoh's tomb is hiding a prize, we asked players which one they usually picked,” said Hilary.
Slotland Celebrates 3000th Facebook Friend with Free Chips for Winners of Quiz Now on Its Facebook Page
"At the moment young teens are all looking to celebrities - they're the new gods.
Your Life daily: Don't let celebs steal your role
Sweet said: "At the moment young teens are all looking to celebrities - they're the new gods. But negative images focused on shopping, drinking and bling, can hold young women back.
Role play; family THEY ARE THE TYPE OF 'STARS' MODERN KIDS LOOK UP TO. BUT ARE THESE 'IT GIRLS' SENDING OUT THE WRONG MESSAGE?
He said: "Footballers like David Beckham are the new Gods.
The glory of Galliano; MADCAP DESIGNER STIRS IT UP IN FRANCE