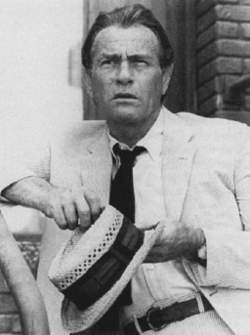 Darren McGavin as reporter Carl Kolchak in The Night Stalker.

The Night Stalker was a highly successful made-for-television vampire movie produced by Dan Curtis in the wake of his successful vampire-oriented soap opera, Dark Shadows. The story concerned a luckless reporter, Carl Kolchak, (Darren McGavin) who encountered a vampire named Janos Skorzeny (Barry Atwater) who was killing showgirls in Las Vegas. He tried to convince his editor and the police of the vampiric nature of the killer, but in their disbelief he was left to confront the bloodsucker by himself. The show was notable in that it received the highest rating of any made-for-television movie to that date and led to The Night Stalker television series, in which Kolchak tracked down a variety of creatures of the night including a vampire created by Skorzeny who subsequently moved to Los Angeles. Richard Matheson wrote the screenplay for the debut episode, which aired January 11, 1972 on ABC. The original novel by Jeff Rice, upon which the movie was based, was published in 1974. Kolchak has been kept alive into the new century in reprint editions of the original novels and new graphic novel adventures from Moonstone publishing. The original television movie and series are available on DVD.

Feedback
Flashcards & Bookmarks ?
Please log in or register to use Flashcards and Bookmarks. You can also log in with
Flashcards ?
My bookmarks ?
+ Add current page to bookmarks
Mentioned in ?
References in periodicals archive ?
Hyde, Frankenstein, The Picture of Dorian Gray, Dracula, The Turn of the Screw, The Night Stalker, The Night Strangler, The Norliss Tapes, Scream of the World, Trilogy of Terror, Dead of Night, Trilogy of Terror II, Burnt Offerings, Curse of the Black Widow, and Intruders: They Are Among Us, as well as productions that never happened, the 2019 documentary about Curtis, and his legacy.
The Television Horrors of Dan Curtis: Dark Shadows, The Night Stalker and Other Productions, 2nd Edition
Known as the Night Stalker, the satanist killed 14 people aged nine to 83.
American psychos; INSIDE THE MINDS OF SERIAL KILLERS
Fort Campbell, KY, June 09, 2019 --(PR.com)-- The Night Stalker Foundation is proud to announce their latest efforts to promote and elevate the mission of this important organization.
Night Stalker Foundation (NSF) Announces Refocused Mission to Serve the Critical Needs for Night Stalkers and Their Families
On their first night of watch, the Night Stalker attacked three times, but each one was just outside the 'rat trap' area being surveilled.
Martin Clunes is returning for series two of ITV's Manhunt about serial rapist Delroy Grant; The first series was so good that we can't wait for this one
Nicknamed The Night Stalker, the massive police operation to catch Grant is nowto be told in a new ITV drama, with Martin Clunes once again playing detective Colin Sutton.
Gruesome truth about Night Crawler rapist Delroy Grant - snared by Colin Sutton; Martin Clunes is set to reprise his role as the DCI in a second series of Manhunt
Dubbed the Night Stalker, Grant raped and assaulted elderly victims in South London over 17 years.
I want to play Levi Bellfield cop again; Star Clunes on real-life crime sequel to Manhunt
Nicknamed The Night Stalker, he killed at least 14 people.
Most notorious serial killers from around the world
Conor Ashton, 23, modelled himself on Satanic murderer Richard Ramirez, who was known as the Night Stalker.
THE NIGHT STALKER COPYCAT'S RAMPAGE OF TERROR; TWISTED THIEF MIMICS SERIAL KILLER NIGHT RAIDS 'Danger to women' gets 12-year jail sentence
The Night Stalker Between June 1984 and August 1985, a serial killer dubbed the Night Stalker broke into houses in Los Angeles and San Francisco murdering 13 people and assaulting dozens of others.
The genius who left his dabs all over history; HOW DOCTOR'S AMAZING FINGERPRINT DISCOVERY CHANGED THE COURSE OF CRIMINAL JUSTICE Experts hail forgotten missionary as TV show puts his breakthrough in spotlight
Each scenario described above was the plot of either one of the two made-for-TV movies about Kolchak or an episode of Kolchak: The Night Stalker (1974-1975).
Returning to Kolchak: Polymediated Narrative, Discourse, and Supernatural Drama
You just finished filming "The Night Stalker" in which you play serial killer Richard Ramirez.
'When my agent called, I said, "I'm in. No matter what"' Lou Diamond Phillips