The Riddler | Article about The Riddler by The Free Dictionary
https://encyclopedia2.thefreedictionary.com/The+Riddler
Printer Friendly 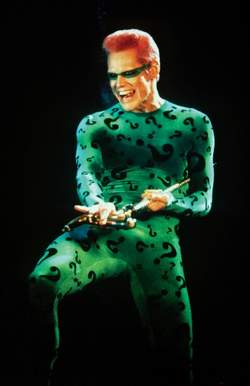 Jim Carrey as the Riddler in Batman Forever (1995).

Feedback
Flashcards & Bookmarks ?
Please log in or register to use Flashcards and Bookmarks. You can also log in with
Flashcards ?
My bookmarks ?
+ Add current page to bookmarks
Mentioned in ?
References in periodicals archive ?
Jim Carrey did The Riddler once and he did a wonderful job.
Eddie Murphy confused over Riddler role
The upcoming episode is entitled "How the Riddler Got His Name," and Fox just released its synopsis, according to (http://screenrant.com/gotham-how-the-riddler-got-his-name-images-synopsis/) Screen Rant .
'Gotham' Season 3, Episode 15 Synopsis Released
At the NBC party for the Television Critics Association in January, executive producer Patrick Schumacker revealed to (https://editorial.rottentomatoes.com/article/dc-comics-easter-eggs-in-powerless/) Rotten Tomatoes that "iZombie" star Robert Buckley was cast to play the Riddler's henchman.
'Powerless' Episode 4 Synopsis Teases Emily's New Romance
Aside from the Riddler, they will be introducing Harley Quinn.
Cory Michael Smith Talks Riddler's 'Classy' Costume In 'Gotham'
Once he starts putting this together, and deciding 'this is my identity,' then he can eventually don the title of the Riddler. He doesn't know that the question mark is his emblem yet, but he's already used it," said Smith.
'Jessica Jones' Star Naian Gonzales Norvind Joins Cast As Mad Hatter's Sister In 'Gotham' Season 3
Instead of buying expensive costumes, I asked an artist friend to paint Joker's and The Riddler's suits on my boys' shirts.
3 tips for creating fun memories
The whole Dantes family strut the super villain look with Dingdong as The Riddler and Marian as Poison Ivy from the same American comic series.
LOOK: Celebrity kids in costumes for Halloween
Visitors will have 18 rides to choose from, and one they certainly need to try out is the Riddler Revolution ride in Gotham City.
Warner Bros World Abu Dhabi: 10 things to know
Going toe-to-toe with The Riddler? You'll only end with your head in a spin on The Riddler Revolution!
Warner Bros. World Abu Dhabi gears up for grand July opening
Smith is known for playing Ed Nygma, better known as the Riddler, in the Fox show "Gotham." His character has a long-standing feud against Oswald Cobblepot (Robin Lord Taylor), also known as the Penguin.
Cory Michael Smith Comes Out As Gay
When the park opens this summer, Batman fans will have the chance to walk the streets of Gotham City alongside notorious super-villains such as The Joker, The Riddler, Scarecrow, Catwoman and Harley Quinn.
Warner Bros. World Abu Dhabi set to thrill Batman fans
Dean, who also worked under Carsley at Brentford, "Cars is a funny guy - I call him 'The Riddler' but he's of the best coaches I've ever worked with.
BIRMINGHAM ARE PEP'D UP