(gŭng`gä), river, c.1,560 mi (2,510 km) long, rising in the Gangotri glacier in the Himalayas in Uttarakhand state, India, and flowing generally southeast through NE India across a vast plain to the Bay of Bengal in Bangladesh; the most sacred river of Hindu India. The fertile Ganges plain is one of the world's most densely populated regions; rice, grains, oilseed, sugarcane, and cotton are the main crops. Because of its location near major population and industrial centers, however, the river is highly polluted.

The lower Ganges is joined by the BrahmaputraBrahmaputra
[Sanskrit,=son of Brahma], river, c.1,800 mi (2,900 km) long, rising in the Kailas range of the Himalayas, SW Tibet, China, and flowing through NE India to join with the Ganges River in central Bangladesh to form a vast delta; it is navigable for large craft c.
..... Click the link for more information.  River W of Dhaka, Bangladesh, to form the Padma, its main channel to the sea. The united rivers branch into many distributaries, forming the vast and fertile Ganges-Brahmaputra Delta, which stretches from the Hugli River on the west to the Meghna on the east. The delta region covers roughly 25% of India's total territory and supports upwards of 300 million people. The delta's southern fringe, a great wilderness of swamp, dense timber forest, small islands, and tidal creeks, is known as the SundarbansSundarbans,
large, heavily forested swamp region, c.3,860 sq mi (10,000 sq km), in the S Ganges delta on the Bay of Bengal, about 60% in SW Bangladesh and the rest in West Bengal state, India.
..... Click the link for more information. ; it has been the site of land reclamation projects. This low-lying area has repeatedly suffered great devastation from cyclones and coastal flooding. KolkataKolkata
, formerly Calcutta
, city (1991 pop. 10,916,272), capital of West Bengal state, E India, on the Hugli River. It is the second largest city in India and one of the largest in the world.
..... Click the link for more information. , India, and ChittagongChittagong
, city (1991 pop. 2,348,428), capital of Chittagong division, SE Bangladesh, on the Karnafuli River near the Bay of Bengal. An important rail terminus and administrative center, it is the chief port of Bangladesh with modern facilities.
..... Click the link for more information. , Bangladesh, are the delta's main seaports. 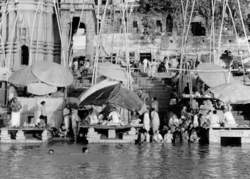 River Ganges at Varanasi, India. The Indian religious belief system proffers much reverence to rivers as a gesture of acknowledgment of their life-sustaining abilities in their primarily agrarian society. Fortean Picture Library.

The symbol of washing away impurities is prevalent throughout religious traditions, and a number of sacred rivers throughout the world have been used for this purpose.

In Israel it was the Jordan. In Persia, the Tigres and Euphrates. In Egypt, the Nile. In India, it is the Ganges. Flowing from the head of Shiva, high in the Himalayas, down past Benares, the Ganges attracts legions who flock to its banks to bathe and purify themselves. It is considered a strong female presence, and its religious significance probably harks back to ancient times, predating the duality of pure and impure.

Ganga, a river in India and Bangladesh.

When taken together with the Brahmaputra, the Ganges ranks third in the world behind the Amazon and the Congo in its volumetric rate of flow. Length, 2,700 km; basin area, 2,055,000 sq km (without the Brahmaputra, 1,120,000 sq km). The Ganges originates in the Himalayas in two headstreams —the Bhagirathi (on the right) and the Alaknanda (on the left)—and flows into the Bay of Bengal of the Indian Ocean. The Bhagirathi rises in the vicinity of the Gangotri Glacier; the Alaknanda originates in the eastern part of the Zaskar Range. From the confluence of its headstreams the Ganges flows among the spurs of the Himalayas through narrow gorges. The river’s middle course begins where it emerges from the mountains onto the alluvial Gangetic Plain (the eastern part of the Indo-Gangetic Plain). The river first traverses rolling and mostly forested country, heavily rutted by the channels of rivers flowing down from the Himalayas, after which it flows slowly through a flat plain in a broad (8-12 km) valley with numerous former river beds, lakes, channels, and marshes in its floodplain. Its channel is 400-600 m wide. The Ganges receives many tributaries, the largest being the Jumna. For a distance of more than 1,000 km the Jumna flows almost parallel to the Ganges, joining it at the city of Allahabad. The stretch between them is called the Doab, which means two rivers; this is one of the most populous regions of India.

The mouth of the Jumna marks the start of the lower course of the Ganges. The elevation of the plain in this section gradually drops from 100-120 m to 25-30 m by the beginning of the delta. The right bank is approached in places by northern spurs of the Chota Nagpur Plateau (the Baghel-khand and Rajmahal hills), the bank becomes high and craggy, and in certain sections there are rapids (for example, by the city of Mirzapur). Elsewhere the channel is wide and the valley well defined. The floodplain is rutted with former river beds and the courses of numerous channels. Receiving the waters of the left tributaries which flow down from the Himalayas, the Ganges becomes a very large river, its width exceeding 2 km in places. Below the Rajmahal Hills the Ganges flows through the Bengal lowlands and together with the Brahmaputra forms a vast delta, one of the largest on earth (up to 100,000 sq km in area, or, by other figures, about 80,000 sq km), with a complex structure. Its surface pattern divides it into two parts. The northern part does not flood, has fertile soils, and is well settled, with rice plantations. The southern part, smaller in area, is called the Sundarbans and is covered with jungles and swamps. The delta is bordered by large branches of the Ganges: on the west by the Hooghly (around 500 km long, about 20 km wide at its mouth and 10-12 m deep, a depth that enables ocean-going vessels to navigate as far up as Calcutta) and on the east by the Padma-Meghna, which merges with the Brahmaputra 230 km from the mouth. The Padma-Meghna, the main channel of the Ganges, enters the Bay of Bengal in four principal branches.

The Ganges is fed in several ways: in the mountainous part principally by glacial and snow meltwater and farther down primarily by monsoon rains. These rains last for the most part from July to September (the effect of the monsoons partially extends to the mountainous area as well, up to an elevation of 4,000 m). The water starts to rise at the end of April and the beginning of May, and its highest level is usually in the second half of August and the first half of September; the mean high rise is around 10 m, but at high flood it reaches 15 m and more. In the cold part of the year the river has a reduced volume of water. The fluctuation range of the water level is greatly affected in the lower reaches by tides (as much as 5.5 m at the mouth of the Hooghly and 3-3.4 m at Calcutta), which extend 300 km upstream.

The mean discharge rate at the mouth (including the Brahmaputra) is 35,000-38,000 cu m per sec (about 1,200 cu km a year). The Ganges carries out approximately 350 million tons of silt a year. (The silt causes the great turbidity of the waters of the river and of the Bay of Bengal at the mouths of the Ganges.) The most important tributaries of the Ganges are the Ramganga, Gumti, Gogra, Gandak, Burhi Gandak, Ghugri, and Mahananda, from the left, and the Jumna and Son, from the right.

The Ganges is of great economic importance. Located in its basin are many major cities, including Delhi, Agra, Moradabad, Kanpur, Allahabad, Varanasi (Benares), Patna, and Calcutta. Calcutta is the major ocean port. The water resources of the basin are used extensively for irrigation. The waters of the river begin to be distributed as soon as it leaves the mountains. The largest arterial irrigation canals include the Upper and the Lower Ganges canals; the Upper, Lower, Eastern, and Western Jumna canals; the Agra Canal; and the Sardah Canal. Large-scale construction of new irrigation systems and hydroengineering complexes is under way. The Ganges is navigable for 1,450 km from its mouth. In Bengal, rivers serve as the basic means of communication. The hydropower resources of the rivers in the Ganges basin are estimated at approximately 150 million to 160 million kilowatts; however, they are very poorly utilized.

The Ganges River is enveloped in an aura of sanctity, veneration, and worship. Adherents of Hinduism believe that its waters possess life-giving power, and the mouths of its tributaries, as well as several cities, are held sacred.

river sacred to the Hindus, who are freed from sin by bathing in it. [Hinduism: Brewer Dictionary, 385]
See: Sacred Places
Allusions—Cultural, Literary, Biblical, and Historical: A Thematic Dictionary. Copyright 2008 The Gale Group, Inc. All rights reserved.

the great river of N India and central Bangladesh: rises in two headstreams in the Himalayas and flows southeast to Allahabad, where it is joined by the Jumna; continues southeast into Bangladesh, where it enters the Bay of Bengal in a great delta; the most sacred river to Hindus, with many places of pilgrimage, esp Varanasi. Length: 2507 km (1557 miles)
Collins Discovery Encyclopedia, 1st edition © HarperCollins Publishers 2005