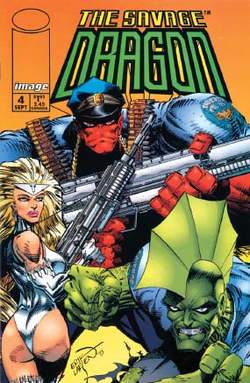 Discovered naked in a burning empty lot in Chicago, an amnesiac green man with fangs and a fin on his head is taken to the hospital. Named “Dragon” by a nurse, the man bonds with Lieutenant Frank Darling of the Chicago Police Department. Later, when Dragon helps stop some super-criminals at the harbor, Darling tries to get Dragon to join the police force to help fight the rising tide of super “freaks.” After surviving a tragedy partially engineered by the criminal gang known as the Vicious Circle, Dragon becomes a Chicago PD officer, with a penchant for fighting crime, getting his shirt torn off, and romancing the ladies.

Comic creator Erik Larsen had started in the independent comics trenches, which is where his childhood creation, the Dragon, first saw print (in Megaton #3, February 1986). Larsen worked his way up through the comics ranks, eventually becoming a fan favorite on Marvel Comics such as Amazing Spider-Man and Nova. Larsen left Marvel with six other popular creators to form Image Comics in 1992. The Savage Dragon #1 debuted a three-issue miniseries in July 1992, and the regular series has appeared monthly (mostly) ever since its first issue in June 1993. Larsen has written and drawn every issue to date, though other creators came onboard to create special issues, spin-off miniseries, and crossovers with books as diverse as Destroyer Duck, Marshal Law, Teenage Mutant Ninja Turtles, Superman, and Megaton Man.

The Savage Dragon has incredible strength, and can jump huge distances. He is nearly invulnerable to flame, plasma, explosions, and gunfire, though he has been hurt, cut, and even maimed by maces, knives, and other weapons. His healing power is also advanced; he has re-grown entire limbs in the past, after battles with supervillains. The most dangerous villains he faced in the past worked for the OverLord, in the Vicious Circle. Villains included SkullFace, Hardware, Abner Cadaver, Arachnid, Clawedd van Damage, Phathead, Stigma, and the waste-spewing Dung. After the death of OverLord, a more charismatic leader named CyberFace took over the Circle, and bedeviled Dragon anew, even succeeding in getting him fired from the police department.

For a time, Dragon worked with a government-sponsored Special Operative Strikeforce, but after facing a personal tragedy on his wedding day, Dragon semi-retired. Sometime later, when Dragon killed an infant who would have grown up to be the villain Damien DarkLord, he caused a disruption in the timestream, and discovered he was now living in a new “Savage World,” similar to the old Earth, but different enough to be dangerous. He was forced to figure out friend from foe, and deal with the many surprises that this new life threw at him.

During his run, Dragon has teamed up with a variety of heroes—many of whom have had their own spin-off series or miniseries—including star-spangled cyborg SuperPatriot, the funky weirdoes known as Freak Force, the squabbling Deadly Duo, gender-switching Mighty Man (whose secret identity is a female), and more. Unmatched in this capacity by most of the other Image creators, Larsen has singularly created a vast universe of characters that have an internal consistency. He has also managed to crossover with other series; besides those in specific titles previously mentioned, and other Image heroes, Savage Dragon has interacted with Hellboy, FemForce, E-Man, Zot, Vampirella, the DNAgents, and others.

In October 1995, USA Network debuted a Savage Dragon animated series. The series lasted two seasons, ending in the fall of 1996 after twenty-six episodes. Multiple action figures of Dragon and his friends and enemies have been produced, as well as statues, posters, trading cards, and more. Larsen also has an aggressive trade paperback program, so that fans can read all of the Dragon’s adventures even if they can’t find the back issues.

In the Image Comics 10th Anniversary book (2005), Larsen finally revealed the Savage Dragon’s origin. He was the evil alien Emperor Kurr, who intended to wipe out all human life on Earth. But two alien scientists stopped Kurr by giving him amnesia and sending him to Earth, where, ironically, he has since become humanity’s champion. —AM