(redirected from The Shadow Strikes) 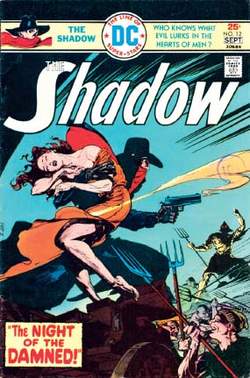 Who knows what evil lurks in the hearts of men? The Shadow knows!” A generation of pulp readers and radio fans grew up knowing by heart that chilling oath, recited by the mysterious scourge of the underworld, the Shadow.

The Shadow’s origins lie in radio, where in 1930 pulp publishers Street & Smith were sponsoring a show to promote their Detective Story magazine. The weekly program, Detective Story Magazine Hour, was a mystery show narrated by a menacing-sounding announcer known only as the Shadow. When Street & Smith realized that this “Shadow” character was creating a lot of interest, they rushed to bring out a pulp magazine by that name before anyone else thought of the idea. To that end, they grabbed a painting that was lying around—the only one they could find showing someone’s shadow—to use as a cover, and recruited a young journalist and magician called Walter Gibson. Gibson’s brief was to write 60,000 words a month (soon to rise to twice a month) about this Shadow character and to make it a success. Gibson duly obliged.

The first issue of The Shadow hit the newsstands in 1931 and introduced an eerie figure swathed in a large, black cloak and hat, with a scarf covering most of his face—a genuine man of mystery who was sworn to punish evildoers of each and every persuasion. It also introduced the first of his many assistants, Harry Vincent, who was about to commit suicide by jumping off a bridge until the Shadow prevented him from doing so. In time, the Shadow collected a band of assistants, including cabbie/chauffeur Moe Shrevnitz, reporter Clyde, switchboard operator Burbank, and African strongman Jericho, among others. The Shadow himself had many identities, including police station janitor Fritz, the aged Phineas Twabley, Henry Arnaud, and George Clarendon, but it was millionaire playboy Lamont Cranston to whom he most often returned. In fact, these were all fictitious identities (except for Cranston, who was a real millionaire whom the Shadow persuaded to leave the country in the magazine’s second issue, so that he could assume Cranston’s identity), as the Shadow was in story reality Kent Allard, a noted explorer and aviator.

The Shadow stories gradually became faster and harsher as the decade progressed, with Gibson adding layers of colorful background to the feature. (The Detective Story Magazine Hour radio show was canceled in 1935.) While it is true that the Shadow is mostly identified as a masked mystery man of the pulps, his stories—especially toward the end of the 1930s and into the 1940s—contained many superhero elements and conventions. In print, the Shadow operated out of Cranston’s fantastic mansion, which came complete with radio tower and a hangar for his autogyro (a super-helicopter) and limousine. Typically, Burbank would discover some wrongdoing and wire the Shadow and his gang, who would then race into action. The Shadow became increasingly cavalier toward his foes, effectively acting as judge, jury, and executioner, meting out justice with his two blazing .45s while laughing maniacally the whole time. Outside of his various automobiles and aircraft, his only gadgets were suction cups that slipped onto his hands and feet, allowing him to scale walls and tall buildings.

Motivated by a desire to see evil of all manner dismantled, the Shadow quickly amassed a colorful rogues’ gallery of foes, including Grayfist, the Robot Master, the Wasp, Murder Master, the Creeper, Voodoo Master, and the Green Terror, as well as such sinister organizations as the Green Hoods and the Silent Seven. While these bizarre antagonists rarely lasted beyond a single story’s end, one villain—the self-styled Ruler of Tibet, Shiwan Khan—kept coming back enough times to be considered the Shadow’s major nemesis.

The pulp’s success sparked a mini merchandising industry that produced pins, costumes, books, games, disguise kits, and much more. Just as the Shadow was inspired by radio, he fittingly returned there for his own show, which thrived until 1954 and starred, among others, Bill Johnstone, Bret Morrison and—most memorably—Orson Welles. On the radio, the Shadow’s alter ego was Lamont Cranston, who had acquired all manner of powers, including mind-reading, hypnotism, and even invisibility, through years of study in Tibet. He rarely used the pulp’s band of comrades, but he did acquire a pretty young assistant (and potential love interest), Margo Lane. On the radio, she was voiced by veteran actress Agnes Moorehead.

Lane made it into the pulps by the early 1940s, but the title was in decline by that point, young fans having switched to the more wholesome, patriotic heroes of the comic books. Comics readers were introduced to the Shadow in early 1940, when the first issue of Shadow Comics (also published by Street & Smith) hit the newsstands. Later that year, a moody Shadow newspaper strip, put out by the Ledger Syndicate, began a two-year run (from June 1940 to June 1942). It was written by Gibson and well drawn by Vernon Greene. Gibson also wrote the comic book for six years (with art by the Jack Binder studio, among others), adapting a lot of his pulp stories, interspersed with reprints of the newspaper strip. These comic strips were very true to the spirit of the pulps, featuring the supporting cast and even Shiwan Khan. Ironically, the comic’s artistic high point came after Gibson had left, with a long run by artist Bob Powell from 1946 to its cancellation in 1949. The Powell years featured fanciful fare such as flying saucers and the Shadow Junior, but they were nevertheless masterpieces of dramatic, atmospheric storytelling.

Street & Smith were hit hard by the postwar move away from the superhero genre— as that was precisely what their pulp and comics empires were built on. In 1949, both the comic and the pulp were canceled, the pulp appropriately ending with three issues written by a returning Walter Gibson, with covers by longtime pulp artist George Rozen. The radio show lived on past the death of the pulps until 1954; since then its syndicated reruns have periodically resurfaced in radio shows across the country (as well as various lines of nostalgic media). At its height, the Shadow phenomenon inspired a number of films and serials, launched by a pair of Grand National movies starring Rod La Rocque: The Shadow Strikes, in 1937, and International Crime a year later. In 1940, Columbia Pictures released a fifteen-chapter serial simply called The Shadow, starring Victor Jory, while Monogram Pictures released three Shadow movies in 1946, all starring Kane Richmond. The 1950s were a poor decade for the character, but out of nowhere, in 1958 Republic produced a Shadow movie called The Invisible Avenger, starring Richard Der.

In 1963, in the wake of the James Bond phenomenon, publisher Louis Silberkleit picked up the Shadow license and commissioned Walter Gibson to write a spy-themed Shadow novel for his Belmont Books line. The paperback was not a success, but Silberkleit decided to make the most of his investment by moving the franchise over to his rather more successful comics division, Archie Comics. The first couple of Archie Shadow comics in 1964 were fairly pedestrian retreads of the pulp stories, but with his third issue the character was inexplicably transformed into a superhero. This Shadow wore a green-and-blue costume with a mask and cape, complete with boot-jets and sonic whistle. In his alter ego of Lamont Cranston, he was a bespectacled businessman, while Lane became his unsuspecting secretary. The strips, written by Superman co-creator Jerry Siegel and drawn by Paul Reinman, have become famed for their poor craftsmanship; there was little attempt at character development, plot, or narrative. The superhero Shadow amassed a rogues’ gallery of Grade Z no-hopers, such as Dr. Demon, Elasto, Attila the Hunter, Brute, and Radioactive Rogue, as well as the now inevitable Shiwan Khan. The comic was canceled after only eight issues.

While Silberkleit’s 1960s reworkings were unsuccessful, a renewed interest in pulps during the 1970s brought forth a whole slew of high-quality revivals. A number of paperback houses successfully reissued old Gibson Shadow stories, including Pyramid, which commissioned comics star Jim Steranko to paint a series of striking new covers. DC Comics contacted Steranko to helm a new Shadow title for them, but the honors eventually went to writer Denny O’Neil and talented young artist Mike Kaluta. DC’s series went through three artists (with Frank Robbins and E. R. Cruz also contributing) in only twelve issues, and it was not the commercial success that the company had hoped for. Nonetheless, the comics were an outstanding example of the medium at its finest. Whereas that 1970s series was faithful to its pulp origins, a 1986 reinvention by Howard Chaykin was anything but. Chaykin’s miniseries was set in contemporary New York and, in addition to the old cast, starred Harry Vincent’s daughter, Mavis, as a critical sparring partner for the increasingly bloodthirsty Shadow—and his two Tibetan sons! Longtime fans were outraged at the strip’s mix of sex and violence, yet it was successful enough to inspire a regular series in 1987 (running for nineteen issues) which, if anything, was even more bizarre.

A third DC series of the 1980s, The Shadow Strikes, was once more set in the 1930s, as were five mid-1990s outings from Dark Horse Comics, which arrived in the wake of 1994’s Universal Shadow movie—the most lavish to date. The film, directed by Russell Mulcahy and starring Alec Baldwin, looked fabulous and had all the elements of the pulp’s glory years. However, it had none of the original’s heart or intelligence, and suffered from a poor script. Nevertheless, the Dark Horse titles once more teamed the Shadow with his definitive comic artist, Mike Kaluta. If little has been seen of the character since the last of these strips in 1995, his influence remains immense. The notion of the creature of the night, operating from his millionaire’s mansion, striking terror in the hearts of wrongdoers, has held enormous sway over generations of comics heroes, from Batman and the Black Terror to Moon Knight and beyond. Fittingly, Batman and the Shadow have teamed up twice (in Batman #253 and #259) during DC’s first, mid-1970s run with the pulp hero, and they made a fine pairing.

Sam Raimi, director of the first three Spider-Man films, and Michael Uslan, executive producer of the Batman movies, have joined forces to develop a new The Shadow motion picture, as Uslan acknowledged in an interview in 2010. —DAR

Feedback
Flashcards & Bookmarks ?
Please log in or register to use Flashcards and Bookmarks. You can also log in with
Flashcards ?
My bookmarks ?
+ Add current page to bookmarks
Mentioned in ?
References in periodicals archive ?
Jones has authored two previous books and countless comics, including Green Lantern: Mosaic, The Trouble with Girls, Batman: Jazz, and The Shadow Strikes. His latest project is the nonprofit Media Power for Children.
Bang, you're dead. (Soundbite)