The Spectre | Article about The Spectre by The Free Dictionary
https://encyclopedia2.thefreedictionary.com/The+Spectre
Printer Friendly 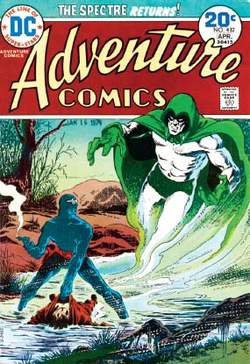 Within a year of Superman’s first appearance, DC Comics followed up with Batman and the Sandman. Soon after, among a flood of colorful crime fighters, Superman creator Jerry Siegel invented the first supernatural hero, the Spectre. Drawn by young artist Bernard Baily, Siegel’s first Spectre story was featured in More Fun Comics #52 in early 1940, and it is safe to say that young comics readers had never seen anything quite like it. The story opens with tough cop Jim Corrigan attending a party celebrating his engagement to socialite Clarice Winston. Following a tip-off, Corrigan rushes to a nearby race course where a bunch of local criminals, “Gat” Benson’s hoods, are attempting a robbery. Corrigan rounds them up single-handedly; but later an enraged Benson kidnaps Corrigan, shoves him into a concrete-filled barrel, and throws it (and Corrigan) into a river.

Naturally, this being a comic, death is hardly an impediment to a hero’s career, and so, at the gates of Eternity, the voice of God tells Corrigan that his work is not yet complete, and he is returned to earth, where he destroys the gang of crooks. This new “avenging Spectre” has almost limitless powers, including a death stare (by which criminals are literally frightened to death), and the ability to read minds, heal wounds, grow to an immense size, and even travel back in time. Sensing, quite understandably, that he is not quite the same as other men, Corrigan breaks off his engagement to Winston and goes home to sew himself a green, hooded costume.

Over the next couple of years, the Spectre struck terror into the hearts of crooks everywhere and was in many ways a figure of horror himself. He was effectively God’s executioner, and whether it was a common hood or an exotic weirdo such as Zor, the Blue Flame, Xmon, or the Black Doom, he dispatched each foe with cold efficiency. Love interest Winston made regular appearances in order to give the Spectre someone to rescue, but the Spectre’s creators perhaps felt that their character was becoming too unsympathetic. After the character lost the cover slot on More Fun, Baily tried to humanize his hero by introducing a comedy sidekick, Percival Popp the Supercop, whose sole purpose was to get into trouble. The only outcome was a steady erosion of the Spectre’s unique appeal, and in 1945 the strip was canceled.

For much of the early 1940s, the Spectre was also a regular member of the Justice Society, but while many group members were enjoying successful revivals in the 1960s, the Spectre was conspicuous by his absence. Following a campaign by fans, the Spectral Avenger was finally brought back by editor Julius Schwartz, writer Gardner Fox, and artist Murphy Anderson in three spectacular 1966 issues of Showcase comics, which soon led to a regular series. Wary of returning to the original incarnation’s rather bloodthirsty personality, the new strip played up the character’s mystical side, resulting in a series of rather cosmic, psychedelic adventures. However, this Spectre still lacked the sort of emotional depth that was making Marvel Comic’s superheroes so popular, and it was not until the horror-obsessed 1970s that the strip attained any real popularity.

Legend has it, that after editor Joe Orlando was mugged in New York, he envisioned a new Spectre who could wreak the vengeance that he felt so powerless to mete out. With inventive horror writer Michael Fleisher and artist Jim Aparo on board, the new Spectre debuted in the February 1974 issue of Adventure Comics #431, to a mixture of acclaim and disbelief. Fleisher had gone back to the Spectre’s avenging roots and relished dreaming up new and inventive ways of killing villains. These included turning a hood to wood and sawing him up, cutting someone in half with a colossal pair of scissors, skewering a cell of terrorists with giant protractors, and causing a crime lord to be devoured by a twenty-feet-tall duck! Jim Corrigan himself was now a chain-smoking police detective in the Dirty Harry vein, harder than hard and as cold as the grave. From the start, fan reaction was divided; some loved the hard-hitting stories, while others felt the strip was little more than an exercise in sadism. When DC’s executives heard of the fuss, they took a look at the comic and were so appalled that they canceled it on the spot, despite its encouraging sales. Fleisher and Aparo had their revenge years later, however, when the whole series was collected in a deluxe package, complete with the unprinted stories completed before the axe fell. Apparently, what was once shocking was now a classic.

Recent years have seen three more series, which have largely picked up where the 1970s series left off—with varying degrees of success. A lengthy 1990s run (The Spectre Vol. 3), written by John Ostrander and primarily drawn by Tom Mandrake, was particularly well received, and daringly even brought back Percival Popp, the Super Cop. Ostrander established that the Spectre was actually a fallen angel named Aztar, who now embodied the Wrath of God. Corrigan was the latest human soul to bond with the Spectre as his host. At the end of Ostrander’s run, Corrigan gave up being the Spectre and ascended to heaven.

The Spectre appeared in the dramatic “Chill of the Night!” a 2010 episode of the animated TV series Batman: The Brave and the Bold, in which he was voiced by Mark Hamill (Star Wars). The Spectre stars in the animated short DC Showcase: The Spectre, which first appeared on the Justice League: Crisis on Two Earths DVD in 2010. Gary Cole voiced both the Spectre and his alter ego Jim Corrigan in this short. —DAR & PS

Feedback
Flashcards & Bookmarks ?
Please log in or register to use Flashcards and Bookmarks. You can also log in with
Flashcards ?
My bookmarks ?
+ Add current page to bookmarks
Mentioned in ?
References in classic literature ?
A spectre is haunting Europe -- the spectre of Communism.
It is high time that Communists should openly, in the face of the whole world, publish their views, their aims, their tendencies, and meet this nursery tale of the Spectre of Communism with a Manifesto of the party itself.
View in context
The truth is, that he tried to be smart, as a means of distracting his own attention, and keeping down his terror; for the spectre's voice disturbed the very marrow in his bones.
There was something very awful, too, in the spectre's being provided with an infernal atmosphere of its own.
Again the spectre raised a cry, and shook its chain and wrung its shadowy hands.
`At this time of the rolling year,' the spectre said
View in context
hear me THIS time, Catherine, at last!' The spectre showed a spectre's ordinary caprice: it gave no sign of being; but the snow and wind whirled wildly through, even reaching my station, and blowing out the light.
View in context
``In the name of God!'' said Cedric, addressing what seemed the spectre of his departed friend, ``if thou art mortal, speak!
View in context
Such is the general purport of this legendary superstition, which has furnished materials for many a wild story in that region of shadows; and the spectre is known at all the country firesides, by the name of the Headless Horseman of Sleepy Hollow.
His terror rose to desperation; he rained a shower of kicks and blows upon Gunpowder, hoping by a sudden movement to give his companion the slip; but the spectre started full jump with him.
View in context
When she had passed on, he began to descend the staircase again, with the slowness which he had observed in the spectre, believing himself to be a spectre too, haggard, with hair on end, his extinguished lamp still in his hand; and as he descended the spiral steps, he distinctly heard in his ear a voice laughing and repeating,--
View in context
The spectre still advanced, and on reaching the middle of the room, looked up and saw the energy with which Don Quixote was crossing himself; and if he was scared by seeing such a figure as hers, she was terrified at the sight of his; for the moment she saw his tall yellow form with the coverlet and the bandages that disfigured him, she gave a loud scream, and exclaiming, "Jesus!
View in context