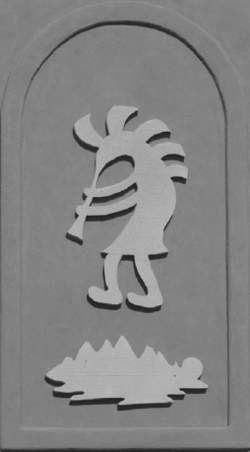 A home in Las Cruces, New Mexico, displays a design of Kokopelli, a trickster from Native American mythology. Trickster archetypes are seen in cultures around the world.

Jung’s theories arose from his observations that the dreams of his patients frequently contained images with which they were completely unfamiliar but which seemed to reflect symbols that could be found somewhere in the mythological systems of world culture. Jung further found that if he could discover the specific meaning of such images in their native culture that he could then better understand the dreams in which they occurred.

One widespread figure in world mythology is the trickster, a powerful spirit or divinity who, as the name implies, delights in all sorts of pranks and jokes. Although the trickster is not actually an evil spirit, the impact of the trickster’s activity is often unpleasant. In dreams the trickster archetype may emerge as a clown or other figure who mocks our pretensions or throws light on the ways in which we delude ourselves. The same archetype may manifest in less desirable ways, spoiling our dream pleasures and throwing things into a state of anarchy. Because tricksters are shapeshifters, they are also symbols of transformation.

Feedback
Flashcards & Bookmarks ?
Please log in or register to use Flashcards and Bookmarks. You can also log in with
Flashcards ?
My bookmarks ?
+ Add current page to bookmarks
References in periodicals archive ?
It speaks to the importance of traditions and the trickster archetype without romanticizing these oft-appropriated symbols.
Gerald Vizenor: Blue Ravens
Topics include the history and development of the editing and publication of The Red Book; influences of Goethe, Schiller, and German Romanticism on Jung's writings; the similarities of the biological illustrations of Ernst Haeckel to Jung's illustration of jelly fish from his dreams; Korean shamanism and it relationship to the mandala symbolism in Jung; Jung and Gnosticism; and the trickster archetype in relation to Jung's inner journey and Cervante's character of Don Quixote.
The Red Book; reflections on C.C. Jung's Liber Novus
In doing so, Hunter was seen by many as exactly what the Trickster archetype represents: a cultural hero, demigod, and savior of peoples.
New Book Explores Hunter S. Thompson's Gonzo Philosophy from a Mythological Angle, and Explores the Question: Can Going Gonzo Act as a Catalyst for Self-Transformation?
Following the theory of the trickster archetype, it is only when sacred and secular aspects of the person and the culture merge that reform can come from within.
The trickster archetype suggests that humans are all walking paradoxes.
Love that Tames: anti-heroes, power and Islamic reform reflected in two Iranian films
Yet, especially in connection with those works (and there are many) in which the author leaves no doubt that the trickster archetype is one of the models for the fictional character, analyses of the relationship between the folk trickster and the modern character can be illuminating.
Tricksters don't walk the dogma: Nkem Nwankwo's Danda
The trickster archetype is of particular significance here, as the anchor of this vernacular choreography and the figure traditionally associated with the space of the crossroads.
"1 + 1 = 3" and other dilemmas: reading vertigo in Invisible Man, My Life in the Bush of Ghosts, and Song of Solomon
The reason is that psi, and all those who get too close to its subversive effects, are apt to fall under the spell of the trickster archetype. As the tide indicates, the trickster is key in this massive 564-page study.
The Trickster and the Paranormal. (Book Reviews)
Encyclopedia browser ?
Full browser ?
CITE
Site: Follow: Share:
Open / Close