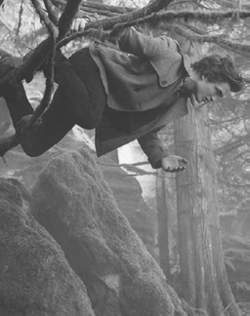 Robert Pattinson plays the sexy vampire Edward Cullen (hanging from a tree in a demonstration of his vampire abilities for in the “Twilight” film series.

The movie The Twilight Saga: New Moon (2009) was based upon the second novel New Moon in Stephenie Meyer‘s four-book Twilight series. The novel was adapted for the screen by Melissa Rosenberg (co-executive producer and writer on TV’s The O.C. and Dexter) and directed by Chris Weitz (The Golden Compass, About a Boy, and American Pie). Continuing their roles from the first Twilight movie, New Moon stars Kristin Stewart as Isabella (Bella) Swan and Robert Pattinson as Bella’s vampire boyfriend Edward Cullen. It also features Taylor Lautner as Bella’s Native American friend Jacob, Ashley Greene as Edward’s sister Alice, and Michael Sheen as Aro, leader of the powerful Volturi, the overall authority in the international vampire community.

The movie begins when a minor incident at Bella’s eighteenth birthday party convinces Edward that he is endangering her life. He leaves Bella and she slips into a depression. But Bella discovers that when she puts herself in danger, she can summon Edward’s image. With the help of her childhood friend Jacob Black, a member of the Quileute tribe, Bella refurbishes a motorcycle for some risky adventures. Bella’s budding relationship with Jacob helps her through her breakup with Edward, although she soon learns that Jacob has a supernatural secret of his own. When Bella wanders alone into a meadow, she confronts a deadly attacker. The intervention of a pack of large wolves saves her from a grisly fate. She later faces a potential deadly reunion with Edward, who has decided to commit suicide among the Volturi, at their headquarters in Italy.

Summit Entertainment announced the production of New Moon one day after Twilight opened in theaters on November 21, 2008. The movie closely followed Meyer’s novel, with a few exceptions. The scenes leading to Edward’s break-up with Bella were omitted as well as the couple’s plane trip returning to Forks, Washington, after their encounter with the Volturi in Italy. Throughout much of the novel, Bella hears Edward’s voice in her head when she is in danger, but in the movie Edward is manifested as a visual presence or an “apparition.” Screenwriter Rosenberg added motorcycles to a scene in which Bella decides to become reckless and approaches young men in Port Angeles, prompting Edward’s first apparition to appear. For the overall visual “look” of the film, director Weitz moved away from the blue tones of Twilight and instead created a warm color palette of golden tones for New Moon.

The producers of New Moon pursued an aggressive production schedule to meet the film’s November 20, 2009 release. New Moon’s estimated budget was $50 million, and filming took place in Vancouver, British Columbia, Canada, and Montepulciano, Italy, from March 23 to May 30, 2009. New Moon was released in U.S. theaters on November 20, 2009 and pre-sold more online tickets through Fandango than any other movie title in its history. New Moon grossed $142.8 million in North America during its opening weekend, far surpassing Twilight’s initial opening of $69.6 million. The movie’s foreign box-office grosses reached $124.1 million by the opening weekend. The website Box Office Mojo reported that within a week of its release, New Moon had become the all-time top-grossing vampire movie in North America. The third movie in the series, The Twilight Saga: Eclipse, is scheduled for release the summer of 2010. The Twilight Saga: Breaking Dawn, the fourth and final novel in the Twilight series, is currently (2009) in development for a 2011 release.