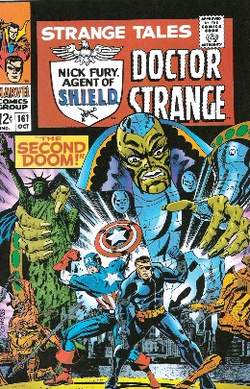 (pop culture)
A paranoid America believed that Communists lurked behind every corner during the cold war, but their invasion of the U.S. was largely limited to fiction—including comic books. Writer Al Feldstein and artist Joe Maneely introduced Marvel (then Atlas) Comics' Asian mastermind Tzing Jao, aka the Yellow Claw, in Yellow Claw #1 (1956), one of the earliest instances of a supervillain being awarded his own comics series. In the vein of Sax Rohmer's Fu Manchu and Flash Gordon's arch-foe Ming the Merciless, the Yellow Claw is sworn to displace Western culture with his own familial hierarchy. Rendered in the classic yet politically incorrect interpretation of the dreaded “Yellow Peril” with jaundiced skin, pointy ears, claw-like fingers, and the obligatory “Fu Manchu” goatee, the Yellow Claw has lived for at least a century and half, his longevity the result of an herbal elixir. Unforgiving and unrepentant, the Yellow Claw shows no regard for anyone other than his sole living relative, his grandniece Suwan, who stands opposed to his machinations. Throughout his four-issue series the Yellow Claw exploited science and sorcery to initiate insidious plots (three per issue) against America, allying with Communist Chinese soldiers and Nazi war criminals, and casting illusions to sway the weak-minded. The bane of his existence was Asian-American FBI agent Jimmy Woo, who, to the Claw's displeasure, was Suwan's lover. Writer Feldstein, a carryover from the intensely graphic EC Comics of the 1950s, felt restrained by the newly implemented Comics Code and vacated Yellow Claw after issue #1 (returning to EC to edit MAD), Maneely departing with him, and writer/artist Jack Kirby took over for the remainder of the run. Resurrected by writer/artist Jim Steranko in the Nick Fury, Agent of S.H.I.E.L.D. story in Strange Tales #161 (1967), the Yellow Claw now fronted a network of uniformed anti-American operatives, their jumpsuits emblematized with a yellow oval claw icon. Although it was revealed that this Yellow Claw was a robot proxy, Steranko had successfully integrated the menace into the Marvel Universe, bolstered by agent Wu's reemergence as a S.H.I.E.L.D. agent. The real Yellow Claw returned in Captain America #164 (1973), and his cold war–era villainy galvanized a group of 1950s superheroes into action in What If? vol. 1 #9 (1978). The Yellow Claw has appeared occasionally since, battling Iron Man, Nova, and the Avengers with mutated monsters, cyborgs, and his will-nullifying “id paralyzer.” His grandniece Suwan, has died.
The Supervillain Book: The Evil Side of Comics and Hollywood © 2006 Visible Ink Press®. All rights reserved.

Feedback
Flashcards & Bookmarks ?
Please log in or register to use Flashcards and Bookmarks. You can also log in with
Flashcards ?
My bookmarks ?
+ Add current page to bookmarks
Mentioned in ?
References in periodicals archive ?
"The Yellow Claw" and "The Golden Scorpion" are true Golden Age of Pulp Fiction adventure stories that will well serve to introduce Sax Rohmer's exceptional storytelling talents and prompt thoroughly entertained readers to seek out more of his work as well as other pulp magazine writers of yesteryear (many of whom are only available through the courtesy of Stark House Press).
The Yellow Claw/The Golden Scorpion
Fu-Manchu and the 1915 The Yellow Claw, the latter of which was adapted into a film by Rene Plaissetty in 1921.
Laughter and the cosmopolitan aesthetic in Lao She's [TEXT NOT REPRODUCIBLE IN ASCII] (Mr. Ma and Son)