(redirected from Theory of stratification)
Also found in: Dictionary, Thesaurus. 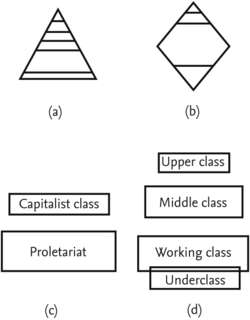 Fig. 31 Social Stratification. One way of representing alternative patterns of social stratification is diagrammatically. Thus, if some societies, including many traditional agrarian civilizations, exhibit (a) a steep pyramid structure, modern western societies can be represented as having a diamond shaped structure (b). In a similar way, in class analysis, the conflict potential of class structures can be represented diagrammatically. For example, (c) the two-class structure of ideal-type Marxian conceptions of capitalist society, or (d) the more complex three (or more) class structure which is sometimes seen as better representing the class structure of modern Western societies.

The hierarchically organized structures of social inequality (ranks, status groups, etc.) which exist in any society (compare CLASS, especially 1to5). As in geology, the term refers to a layered structuring or strata, but in sociology the layers consist of social groups, and the emphasis is on the ways in which inequalities between groups are structured and persist over time.

The term provides a focus in which distinctions can be made between the different forms of social ranking and inequality characterizing different societies or found within one society. In historical and comparative perspective, for example, one finds distinctions between SLAVE, CASTE, ESTATE and modern ‘open class’ societies. Also, one finds similar social characteristics structuring inequalities in different societies. Gender, ethnicity and age, for example, have in various ways been important in relations of domination and subordination in different historical periods and cultures. Access to or command over particular social resources have also been important in producing and sustaining inequalities. Examples here might include literacy (ancient China), religion (Mesopotamia or pre-conquest Inca and Aztec societies), military resources (in imperial territories throughout history). In addition, bureaucratic élites are extremely important in some societies – Eastern Europe and many Third World societies, for example. Gender divisions form a basis for social differentiation in all societies and, equally, relate to relations of domination and subordination. Similarly, ethnicity is a major factor in structuring inequalities in many societies.

Since there are very many bases on which human inequalities may be understood and upon which exploitation and oppression may be produced and reproduced, it is important to recognize that these variables are not mutually exclusive; for example, in the preindustrial world religious and military strata often coexisted along with those based on gender and ethnicity.

As well as the different bases of social stratification, the different shapes or structural profiles (e.g. steepness of hierarchy, number of steps in this hierarchy) of different systems can also be contrasted – see Fig. 31. The usefulness of the term 'stratification’ in allowing the discussion of different bases and forms of inequality has been largely instrumental in bringing the concept back into the mainstream of sociological debate in recent years. The term had become unfashionable with the revival of Marxian class analysis in the 1960s and 1970s. The feminist critique of conventional class analysis, for example, has demonstrated the independent significance of gender, cutting across class differences

between women (see GENDER STRATIFICATION). In the same way, ethnic divisions cannot be simply reduced to conventional class divisions, and debates about ethnic inequalities have demonstrated the complexity of power and opportunity structures.

In addition to the emphases discussed above, FUNCTIONALISM has also stressed the historical and contemporary functional significance of systems of stratification. The best-known text in this tradition is Davis and Moore (1945). These authors argue that stratification is a FUNCTIONAL PREREQUISITE for all societies (see also FUNCTIONAL(IST) THEORY OF SOCIAL STRATIFICATION). Stratification is universally necessary due to the requirement of any society to motivate individuals to fill important social positions. Unequal rewards, including income and status, are seen as means whereby scarce talents are allocated to important positions. Davis and Moore describe social inequality as ‘an unconsciously evolved device by which societies ensure that the most important positions are conscientiously filled by the most qualified persons’. They identify these positions historically as religious office, government, the economy and technical knowledge.

The functionalist approach has been criticized on numerous grounds, including its ideological implications. For example, the notion of ‘functional importance’ is challengeable – how can we demonstrate this without circularity of argument? Also, opportunities to develop skills are not equal in systems of stratification. Birth and inheritance of social position are important and recruitment into élite positions is routinely influenced by factors other than talent. Furthermore, the theory makes assumptions about individuals’ motivations without evidence, and assumes that a period in higher education, for example, is a penalty for which future rewards have to be guaranteed. Finally, its views of society as an entity which has unequivocal requirements involves a questionable REIFICATION. On one view, particularly in its failure to consider the realities of power relations, the functionalist approach can be considered more as an ideological justification of inequalities than a satisfactory analysis of these. On the other hand, the view that stratification performs social functions which may be universal, cannot be ruled out in principle.

Sometimes the distinction is drawn between the relatively ‘descriptive’ approach of theorists who use the term 'social stratification’, and the more analytical approach of those involved in ‘class analysis’ (see CLASS 6 ,7). As shown from the above, this is an oversimplification. Rather than representing two diametrically opposed forms of analysis, a concern with 'stratification’ and a concern with ‘class’ in reality involve two closely interrelated sets of terminology for the analysis of structured inequalities (see Westergaard and Resler, 1975, and SOCIAL MOBILITY).

one of the branches and basic concepts of bourgeois sociology, signifying a system of aspects and criteria of social differentiation and inequality; often used synonymously with social structure.

Theories of social stratification arose in opposition to the Marxist-Leninist theory of classes and class struggle. Bourgeois sociologists ignore the place of social groups in the system of social production and, most important, do not recognize property relations as the chief aspect of the society’s division into classes. They define classes, social strata, and groups according to certain variables (“dimensions”), for example, education, psychology, standard of living, employment, and income. In this case, social strata are defined according to the prevalence of one dimension (single-dimension stratification) or of several dimensions (multidimensional stratification).

Most bourgeois theories of social stratification deny that capitalist society is split into antagonistic classes—the bourgeoisie and the proletariat. Instead, they posit that society is divided into upper, middle, and lower classes and into strata, the number of which, as a rule, is set arbitrarily (between two and six). Theories of social stratification are closely associated with bourgeois concepts of social mobility. According to these concepts, inequality is inevitable in any society and people are more or less free to move from stratum to stratum according to their personal abilities and efforts; social stability is thus ensured and class struggle is unnecessary. Although the study of social stratification tends to be apologetic in regard to bourgeois class differences, it provides important facts about the many social differences in capitalist countries.

In the 1960’s and 1970’s a number of American bourgeois sociologists, including S. M. Miller, B. Barber, and H. Gans, criticized many theories of social stratification that fail to reveal the substantial social differences and conflicts in the USA. Works on poverty in capitalist society and other topics have become widespread.

Marxism-Leninism, while viewing the class division of society as a central issue, attaches great importance to the study of the entire complex system of social differentiation, including differentiation within classes and between different social groups.