[′thər·məl ri′zis·tər]
(electricity)
A resistor designed so its resistance varies in a known manner with changes in ambient temperature.
McGraw-Hill Dictionary of Scientific & Technical Terms, 6E, Copyright © 2003 by The McGraw-Hill Companies, Inc.
The following article is from The Great Soviet Encyclopedia (1979). It might be outdated or ideologically biased.

The most important of the posistors are those made of solid solutions based on barium titanate, BaTiO3, alloyed with lanthanum, cerium, bismuth, or other metals. In the temperature region close to the ferroelectric phase transition (seeFERROELECTRIC), the resistance of such thermal resistors increases by several orders of magnitude upon an increase in temperature, and in a short temperature interval (about 5°K), their temperature coefficient of resistance may reach 50%/°K or more. A change in the composition of the solid solution may shift the region of the phase transition in a temperature interval from ~200°K up to ~500°K. Posistors are also made of Si alloyed with B. 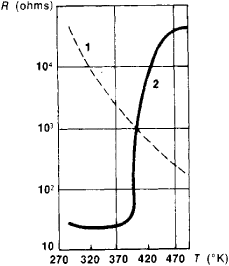 Figure 1. Typical dependence of the electrical resistance on temperature for (1) thermistors and (2) posistors

Thermal resistors are produced in the form of rods, tubes, disks, plates, and beads. Their size ranges from several micrometers to several centimeters. They are used in systems and devices for remote and centralized temperature measurement and control, for fire alarms and heat control, for balancing the temperatures of various components of electrical circuits, and for the measurement of vacuum and the speed of liquid and gaseous flows. They are also used in power meters.