Devices consisting of a conductor heated by an electric current, with one or more hot junctions of a thermocouple attached to it, so that the output emf responds to the temperature rise, and hence the current. Thermal converters are used with external resistors for alternating-current (ac) and voltage measurements over wide ranges and generally form the basis for calibration of ac voltmeters and the ac ranges of instruments providing known voltages and currents.

In the most common form, the conductor is a thin straight wire less than 0.4 in. (1 cm) long, in an evacuated glass bulb, with a single thermocouple junction fastened to the midpoint by a tiny electrically insulating bead. Thermal inertia keeps the temperature of the heater wire constant at frequencies above a few hertz, so that the constant-output emf is a true measure of the root-mean-square (rms) heating value of the current. The reactance of the short wire is so small that the emf can be independent of frequency up to 10 MHz or more. An emf of 10 mV can be obtained at a rated current less than 5 mA, so that resistors of reasonable power dissipation, in series or in shunt with the heater, can provide voltage ranges up to 1000 V and current ranges up to 20 A. However, the flow of heat energy cannot be controlled precisely, so the temperature, and hence the emf, generally changes with time and other factors. Thus an ordinary thermocouple instrument, consisting of a thermal converter and a millivoltmeter to measure the emf, is accurate only to about 1–3%. See Thermocouple, Voltmeter

To overcome this, a thermal converter is normally used as an ac-dc transfer instrument (ac-dc comparator) to measure an unknown alternating current or voltage by comparison with a known nearly equal dc quantity (see illustration). By replacing the millivoltmeter with an adjustable, stable, opposing voltage Vb in series with a microvoltmeter D, very small changes in emf can be detected. The switch S is connected to the unknown ac voltage Vac, and Vb is adjusted for a null (zero) reading of D. Then S is immediately connected to the dc voltage Vdc, which is adjusted to give a null again, without changing Vb. Thus Vac = Vdc (1 + d), where d is the ac-dc difference of the transfer instrument, which can be as small as a few parts per million (ppm). 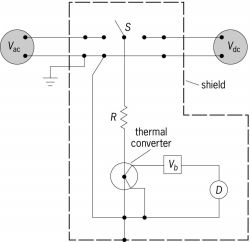 In many commercial instruments, all of the components are conveniently packaged in the shield, shown with a broken line, and several ranges are available by taps on R. Accuracies of 0.001% are attainable at audio frequencies.

Feedback
Flashcards & Bookmarks ?
Please log in or register to use Flashcards and Bookmarks. You can also log in with
Flashcards ?
My bookmarks ?
+ Add current page to bookmarks
Mentioned in ?
References in periodicals archive ?
The gathered energy will be converted to electricity via thermal converters, generators or steam engines.
Development of solar energy in Iran
The thermal converters (whose output power is a function of a temperature differential) include thermoelectric and thermionic generators.
NUCLEAR BATTERY: THE ENERGY FUTURE
Zhang discussed Ledian's record-setting achievements which were accomplished using 36-rod CVD Reactors, Thermal Converters as well as other equipment and process technology provided by Poly Plant Project, Inc.
Poly Plant Project's Advanced 54-Rod CVD Reactor Chosen by Polysilicon Production Plant in China
In general, the rate of transformation of energy from electrical to thermal form in thermal converters is proportional to the root-mean-square (rms) values of current and voltage.
The ampere and electrical standards