[‚thər·mē′än·ik kən′vərd·ər]
(electronics)
A device in which heat energy is directly converted to electric energy; it has two electrodes, one of which is raised to a sufficiently high temperature to become a thermionic electron emitter, while the other, serving as an electron collector, is operated at a significantly lower temperature. Also known as thermionic generator; thermionic power generator; thermoelectric engine.
McGraw-Hill Dictionary of Scientific & Technical Terms, 6E, Copyright © 2003 by The McGraw-Hill Companies, Inc.
The following article is from The Great Soviet Encyclopedia (1979). It might be outdated or ideologically biased.

(or thermionic generator), a device for the direct conversion of thermal energy into electrical energy on the basis of the phenomenon of thermionic emission.

The simplest type of thermionic converter consists of two electrodes separated by a vacuum gap (a simple cesium thermionic converter is shown in Figure 1 on page 604). One electrode is the cathode, or emitter, and the other is the anode, or collector. The electrodes are made of refractory metals, usually molybdenum, rhenium, or tungsten. A heat source supplies enough thermal energy for appreciable thermionic emission to occur from the surface of the metal. After passing through the interelectrode gap, which is a few tenths of a millimeter in size, the electrons impinge on the surface of the collector, where they create an excess of negative charge and increase the collector’s negative potential. If heat is continuously supplied to the emitter and if the collector, 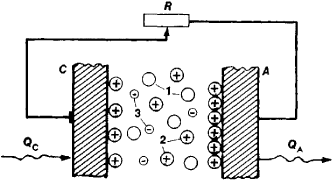 which takes up heat from the electrons that reach it, is correspondingly cooled, then an electric current will be maintained in the external circuit, and work will thus be done. Since a thermionic converter is essentially a heat engine whose working fluid is an “electron gas” (the electrons “evaporate” from the heated emitter and “condense” on the cooled collector), the efficiency of a thermionic converter cannot exceed that of the Carnot cycle.

The thermionic converter produces a voltage of 0.5–1 volt. This voltage is of the order of the contact potential difference but differs from it by the value of the voltage drop across the inter-electrode gap and the voltage losses in the switching lines (Figure 2). The maximum density of the current generated by a thermionic converter is limited by the emission capacity of the emitter and may reach a few tens of amperes from 1 cm2 of surface. To obtain optimal values of the work function of the emitter (2.5–2.8 electron volts [eV]) and collector (1.0–1.7 eV) and to compensate for the electron space charge formed near the electrodes, a slightly ionized cesium vapor is usually introduced into the interelectrode gap. Positive cesium ions are formed when cesium atoms collide with electrons (1) at the hot cathode or (2) in the interelectrode space. The first case is known as surface ionization. In the second case, a cesium atom may be ionized by a single electron impact or through stepwise ionization, in which the cesium atom is brought into an excited state by an initial collision with an electron and is ionized by subsequent collisions. In this second case, arcing occurs; this mode of operation is the one most widely used. Present-day thermionic converters operate at cathode temperatures of 1700°–2000°K and anode temperatures of 800°–1100°K. At such temperatures, the power density at the cathode surface reaches tens of watts per cm2, and the efficiency of the converters may exceed 20 percent. 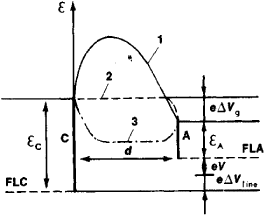