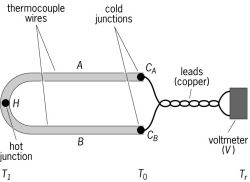 Basic circuit of a thermocouple

a temperature sensor consisting of two unlike electrically conductive elements—usually metal conductors but occasionally semiconductors—that are joined to one another. A thermocouple makes use of the Seebeck effect. If the junctions of the conducting elements (often called thermoelectrodes) are at different temperatures, a thermal electromotive force (emf) is generated in the circuit. The magnitude of the emf is unambiguously determined by the hot and cold terminal temperatures and the composition of the electrodes.

Thermocouples can be divided into a number of types, depending on their design and purpose. They may be of the submersible or surface type, and they may be unjacketed or with an ordinary, explosion-proof, moisture-proof, or other jacket, which may be sealed or unsealed. In addition, they may be shock-resistant or vibration-resistant and stationary or portable.

[′thər·mə‚kəp·əl]
(engineering)
A device consisting basically of two dissimilar conductors joined together at their ends; the thermoelectric voltage developed between the two junctions is proportional to the temperature difference between the junctions, so the device can be used to measure the temperature of one of the junctions when the other is held at a fixed, known temperature, or to convert radiant energy into electric energy.
McGraw-Hill Dictionary of Scientific & Technical Terms, 6E, Copyright © 2003 by The McGraw-Hill Companies, Inc.

A device consisting of two junctions of two dissimilar metals, in an electric circuit; when the two junctions are at different temperatures, a voltage is generated by the device; used for measuring temperature.
McGraw-Hill Dictionary of Architecture and Construction. Copyright © 2003 by McGraw-Hill Companies, Inc.

A device that converts thermal energy directly into electrical energy. In its basic form, it consists of two dissimilar metallic electrical conductors connected in a closed loop. Each junction forms a thermocouple. If the junctions are at different temperatures, an electrical potential difference proportional to the temperature difference will exist in the circuit; the value of the potential generated is different for various combinations of materials. This potential difference is indicated as temperature.
An Illustrated Dictionary of Aviation Copyright © 2005 by The McGraw-Hill Companies, Inc. All rights reserved

Feedback
Flashcards & Bookmarks ?
Please log in or register to use Flashcards and Bookmarks. You can also log in with
Flashcards ?
My bookmarks ?
+ Add current page to bookmarks
Mentioned in ?
References in periodicals archive ?
I do not recommend adding wire extensions to thermocouples unless you are experienced with proper methods.
Hot runners: a view from the trenches: Part 3 of 3: I conclude this three-part examination of real-world problems and solutions involving hot runners by focusing on heaters, thermocouples, and controls
Consistency: The thermocouple measurement should be taken in a consistent manner.
Temperature control in melting aluminum
Thermocouples provide the actual temperature reading from the specific areas where they are placed on the PCB.
Thermal profiling small PCBs: perfect thermocouple placement is necessary for optimized profiles
Chromel-alumel "K" type thermocouples were used which are applicable within the temperature range up to 1250[degrees]C.
Experimental temperature measurement of oxy-acetylene cutting process
After placing thermocouples on BGA components, other thermocouples need to be placed on various ICs, resistors and capacitors.
Anatomy of a correct thermal profile: complex, BGA-laden PCBs demand one-of-a-kind profiles
But for inhomogeneous, multilayer bodies as sheathed thermocouples the Fourier differential equation cannot be solved analytically.
Determination of the time behaviour of thermocouples for sensor speedup and medium supervision/Termopaaride ajalise kaitumise maaramine termosensorite reaktsiooni kiirendamiseks nende kasutamiseks keskkonnavaatlustes
has introduced a new thermocouple probe designed for operation in temperatures up to 2435[degrees]F.
Omega heats up with new thermocouple probe
As such, they are very cost-efficient and space-efficient for applications monitoring a small quantity of thermocouples per site.
Six-channel thermocouple input modules
The Model FUR-1200 calibration furnace is designed for the testing and calibration of thermocouples and RTD sensors.
Calibration furnace