Changes of any property of an aggregation of matter and energy, accompanied by thermal effects.

To evaluate the results of a process, it is necessary to know the participants that undergo the process, and their mass and energy. A region, or a system, is selected for study, and its contents determined. This region may have both mass and energy entering or leaving during a particular change of conditions, and these mass and energy transfers may result in changes both within the system and within the surroundings which envelop the system.

To establish the exact path of a process, the initial state of the system must be determined, specifying the values of variables such as temperature, pressure, volume, and quantity of material. The number of properties required to specify the state of a system depends upon the complexity of the system. Whenever a system changes from one state to another, a process occurs.

The path of a change of state is the locus of the whole series of states through which the system passes when going from an initial to a final state. For example, suppose a gas expands to twice its volume and that its initial and final temperatures are the same. An extremely large number of paths connect these initial and final states. The detailed path must be specified if the heat or work is to be a known quantity; however, changes in the thermodynamic properties depend only on the initial and final states and not upon the path. A quantity whose change is fixed by the end states and is independent of the path is a point function or a property.

Whereas the state of a system is a point function, the change of state of a system, or a process, is a path function. Various processes or methods of change of a system from one state to another may be depicted graphically as a path on a plot using thermodynamic properties as coordinates.

The variable properties most frequently and conveniently measured are pressure, volume, and temperature. If any two of these are held fixed (independent variables), the third is determined (dependent variable). To depict the relationship among these physical properties of the particular working substance, these three variables may be used as the coordinates of a three-dimensional space. The resulting surface is a graphic presentation of the equation of state for this working substance, and all possible equilibrium states of the substance lie on this P-V-T surface.

The portion of the P-V-T surface shown in Fig. 1 typifies most real substances; it is characterized by contraction of the substance on freezing. Going from the liquid surface to the liquid-solid surface onto the solid surface involves a decrease in both temperature and volume. Water is one of the few exceptions to this condition; it expands upon freezing, and its resultant P-V-T surface is somewhat modified where the solid and liquid phases abut. One can project the three-dimensional surface onto the P-T plane as in Fig. 2. The triple point is the point where the three phases are in equilibrium. When the temperature exceeds the critical temperature (at the critical point), only the gaseous phase is possible. 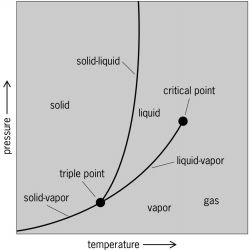 Energy quantities may be depicted as the product of two factors: an intensive property and an extensive one. Examples of intensive properties are pressure, temperature, and magnetic field; extensive ones are volume, magnetization, and mass. Thus, in differential form, work is the product of a pressure exerted against an area which sweeps through an infinitesimal volume, as in Eq. (1).

As a gas expands, it is doing work on its environment. However, a number of different kinds of work are known. For example, one could have work of polarization of a dielectric, of magnetization, of stretching a wire, or of making new surface area. In all cases, the infinitesimal work is given by Eq. (2),
(2)

By extending this approach, one can depict transferred heat as the product of an intensive property, temperature, and a distributed or extensive property defined as entropy, for which the symbol is S. See Entropy

Characteristics of a reversible process are that the working substance is always in thermodynamic equilibrium and the process involves no dissipative effects such as viscosity, friction, inelasticity, electrical resistance, or magnetic hysteresis. Thus, reversible processes proceed quasistatically so that the system passes through a series of states of thermodynamic equilibrium, both internally and with its surroundings. This series of states may be traversed just as well in one direction as in the other.

Actual changes of a system deviate from the idealized situation of a quasistatic process devoid of dissipative effects. The extent of the deviation from ideality is correspondingly the extent of the irreversibility of the process. See Thermodynamic principles

Feedback
Flashcards & Bookmarks ?
Please log in or register to use Flashcards and Bookmarks. You can also log in with
Flashcards ?
My bookmarks ?
+ Add current page to bookmarks
Mentioned in ?
References in periodicals archive ?
Other chapters cover the history of developments in Kalina cycle systems, basic thermodynamics, thermodynamic properties of ammonia-water mixture, binary mixture thermodynamic processes, and cooling cogeneration.
Flexible Kalina Cycle Systems
These thermodynamic processes are identified based on how heat is handled during compression and expansion processes.
Energy and Exergy Analysis of Ocean Compressed Air Energy Storage Concepts
Typically authors explore thermodynamic processes above or below reference temperatures.
Exergy efficiency of a ventilation heat recovery exchanger at a variable reference temperature
Li, "Impacts of thermodynamic processes over the Tibetan Plateau on the Northern Hemispheric climate," Science in China Series D: Earth Sciences, vol.
Impact of Ozone Valley over the Tibetan Plateau on the South Asian High in CAM5
It is expected that before turning on the PT under the load as a result of the thermodynamic processes in the system temperature POI PT--environment called and will be equal to [[theta].sub.a].
Dynamics model of moisture in paper insulation-transformer oil system in non-stationary thermal modes of the power transformer
In order to properly reflect the mechanical response of the system, it is analysed in terms of the mechanical and thermodynamic processes. The analysis is divided into three sections devoted to dynamics of the piston treated as a rigid body, thermodynamics of the gas in the absorber chambers, and gas flow through the valve.
Pneumatic Adaptive Absorber: Mathematical Modelling with Experimental Verification
The engine uses mechanical and thermodynamic processes to reject this heat, and the core components have to be produced to a high degree of precision and smoothness.
Rotary engines will cut emissions
Paolo Franceschetti underlines our technologies which are based on the optimization of thermodynamic processes needed a Company able to guarantee their industrialization and sales exporting this green technology all over the World.
Solwa Srl opened its company's capital to Santex Group
Professor Ding said: "My research will cover materials, thermodynamic processes and cycles, storage components and devices, system integration and optimisation, and applications of cryogenic energy storage.
Birmingham to take lead with cryogenic chair
This model defines evolution as a natural process in any system having the following properties: 1) High fidelity replication of information with survival of replicated information; 2) Information replication uses expendable technology; 3) The replicated in- formation is inert relative to the thermodynamic processes involved in the technology of replication; 4) A quantifiable resistance to entropy; and 5) the system displays intentionality.
Section VI: Philosophy and History of Science Science Hall W1004 E.T. Mcmullen, Presiding
They hypothesize that the degradation of machinery components is a consequence of irreversible thermodynamic processes, that is, a time-dependent phenomenon with increasing disorder.
Introduction to thermodynamics of mechanical fatigue