a combination of deformation, heating, and cooling operations performed in various cycles. The final microstructure and, consequently, the resultant properties of the metal are determined under conditions of high density and optimum distribution of the structural imperfections caused by plastic deformation. Thus, this type of treatment is distinguished by the combination of heat treatment and pressure shaping (plastic deformation). Thermomechanical treatment is made possible by the fact that the presence in real alloys of such structural imperfections as dislocations, stacking faults, and vacancies has an essential effect on the processes of structural transformations. On the other hand, certain structural changes produce new imperfections and redistribute existing ones. Hence, the mechanism and kinetics of structural changes caused by thermomechanical treatment depend on the nature and density of the imperfections and, in turn, affect the number and distribution of such imperfections.

Thermomechanical treatment cycles are best classified according to the order in which plastic deformation and heat treatment are carried out (Figure 1).

The combination of plastic deformation with phase transformations was first put into practical use in the early 20th century, with the introduction of patenting in the production of steel wire. A unique combination of plastic deformation and heat treatment produced excellent mechanical properties that could not be achieved by any other strengthening treatment. In the 1930’s, the mechanical properties of beryllium bronze were greatly improved by another type of thermomechanical treatment using a cycle of hardening, cold deformation, and aging. 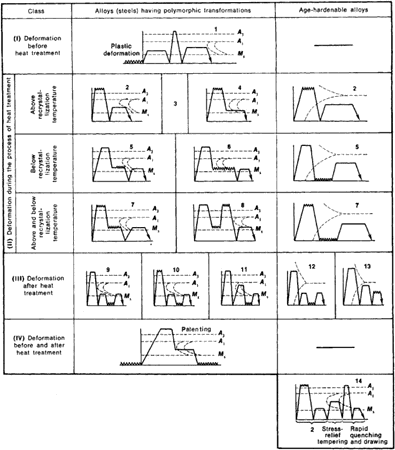 and virtually eliminates a dangerous tendency to temper-brittleness, which is not observed after low-temperature treatment. Development of high-temperature thermomechanical treatment led to the creation of a new process, high-temperature thermomechanical isothermal treatment, in which hot working is combined with isothermal transformation (austempering). Articles treated by this process (in particular, springs) have increased service lives. All the thermomechanical strengthening treatments shown in Figure 1 are used to a greater or lesser degree. The choice of a process depends on the nature and purpose of the alloy and the specific workpiece. The efficiency of a specific thermomechanical strengthening method is determined by a group of mechanical properties. The engineering concept of increased strength involves a rise in resistance to deformation and fracture at various stresses, including those that can cause brittle cracks and premature failure. Therefore, in addition to traditional tensile, impact, and fatigue tests, modern high-strength steels, including thermomechanically strengthened steels, must be evaluated according to such mechanical failure criteria as crack propagation energy.

An understanding of the physical basis of thermomechanical strengthening is possible only after the basic laws governing structural changes during hot deformation have been made clear. The old concept that hot deformation is always accompanied by recrystallization was found to be incorrect.

(1) Hot work-hardening with a disordered arrangement of dislocations, when subsequent quenching increases strength and at the same time reduces resistance to brittle fracture.

(2) Formation of a substructure caused by dynamic recovery and a particularly well-defined and stable subgrain structure through dynamic polygonization. In this case, quenching produces an excellent combination of high strength and resistance to brittle fracture.

(3) Dynamic recrystallization, when increased dislocation density is preserved in some sections and the density is considerably reduced in others. In such a case, quenching can produce a combination of excellent mechanical properties, but they are not reliable because of nonuniformity and instability of the fine structure.

The following cycles of thermomechanical treatment are used for precipitation hardening of alloys: (1) heating to the hardening temperature, deformation, immediate quenching, and aging (high-temperature treatment), and (2) hardening, deformation, and aging (low-temperature treatment). The first cycle is easily accomplished, but its disadvantage is the risk of excessive recrystallization during deformation at the high hardening temperature. It is extensively used in the production of pressed work-pieces made from numerous aluminum alloys containing small additives of Mn, Cr, and other elements that impede recrystallization. The second cycle may cause difficulties associated with the high resistance to deformation of a solid solution at room temperature. It has, however, a number of advantages, including highly dispersed phases that accompany aging even during cold or warm deformation and creation of more uniform distribution of precipitation-hardening phases at dislocations throughout the grains. This second cycle has been successfully used for strengthening age-hardenable copper and aluminum alloys.

Feedback
Flashcards & Bookmarks ?
Please log in or register to use Flashcards and Bookmarks. You can also log in with
Flashcards ?
My bookmarks ?
+ Add current page to bookmarks
Mentioned in ?
References in periodicals archive ?
(2015) Simulator of Thermomechanical Treatment of Metals, In Daaam 2015.
Stability of Retained Austenite in High-Strength Martensitic Steels During Cold Deformation
Simulator of Thermomechanical Treatment of Metals, Proceedings of the 26th DAAAM International Symposium, pp.0513-0518, B.Katalinic (Ed.), Published by DAAAM International, ISBN 978-3-902734-07-5, ISSN 1726-9679, Vienna, Austria
Use of Waterjet in Manufacturing Test Bars of High-Strength Steels
[7] Simulator of Thermomechanical Treatment of Metals. Kana, J.; Vorel, I.; Ronesova, A.
A Study of Material-Technological Modelling for Choosing the Ideal Cooling Rate for Designing Production of Closed Die Forgings Using 30MnVS6 Steel