[¦thər·mō·mi′kan·ə·kəl i¦fekt]
(fluid mechanics)
fountain effect
McGraw-Hill Dictionary of Scientific & Technical Terms, 6E, Copyright © 2003 by The McGraw-Hill Companies, Inc.
The following article is from The Great Soviet Encyclopedia (1979). It might be outdated or ideologically biased.

The thermomechanical effect is manifested in the difference of the liquid levels in two vessels that communicate through a narrow slit or capillary and are maintained at different temperatures (see Figure l,a). Another graphic means of demonstrating the thermomechanical effect lies in the radiant heating of a tube densely filled with fine black powder, with one end immersed in superfluid helium. Upon illumination, the powder is heated rapidly and, because of the thermomechanical pressure difference, the liquid helium forms a fountain, spraying from the upper end of the capillary (see Figure l,b). The inverse effect, called the mechanocaloric effect, occurs upon cooling of superfluid helium when it is forced through narrow slits or capillaries. 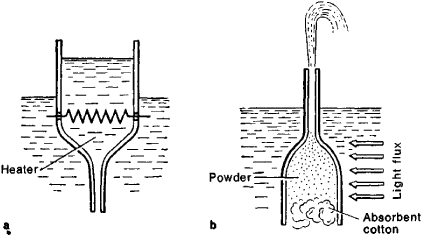 Figure 1. Thermomechanical effect: (a) the level of liquid in the vessel with a live heater is higher than in the communicating vessel, (b) fountaining of helium upon illumination and heating of powder in a vessel with superfluid helium

Within the framework of the two-component model of superfluid helium, the thermomechanical effect may be explained as the equalization of the concentration of the superfluid component, which is flowing freely through the slit toward the heated portion of the liquid. On the other hand, flow of the normal component in the opposite direction is impossible because of the viscous forces in the narrow slit.

For the pressure difference in the thermomechanical effect, thermodynamics provides the equation Δp/ΔT = ρS, where ρ is the density and S is the entropy of the liquid helium.

Feedback
Flashcards & Bookmarks ?
Please log in or register to use Flashcards and Bookmarks. You can also log in with
Flashcards ?
My bookmarks ?
+ Add current page to bookmarks
Mentioned in ?
References in periodicals archive ?
It is well known that during injection molding polymer melt is subjected to complex thermomechanical effects including the variation in How stress and thermal gradients across the sample thickness; it inevitably gives rise to the formation of a hierarchical structure, i.e., skin-core morphology, in the molded samples (1-6).
Annealing-induced structural rearrangement and its toughening effect in injection-molded isotactic polypropylene
But this maximum rating is mostly due to the thermomechanical effects. For example, at extreme temperatures the encapsulant will flow and tear off wire bonds.
Manufacturing effects on data retention of nonvolatile memory devices; can heat from wave or reflow soldering cause premature data loss?