[¦thər·mə¦plas·tik ri′kȯrd·iŋ]
(electronics)
A recording process in which a modulated electron beam deposits charges on a thermoplastic film, and application of heat by radio-frequency heating electrodes softens the film enough to produce deformation that is proportional to the density of the stored electrostatic charges; an optical system is used for playback.
McGraw-Hill Dictionary of Scientific & Technical Terms, 6E, Copyright © 2003 by The McGraw-Hill Companies, Inc.
The following article is from The Great Soviet Encyclopedia (1979). It might be outdated or ideologically biased.

the recording on a transparent or reflecting thermoplastic film of an optical image or electric signals carrying information about an image. In thermoplastic recording, a microscopic relief whose structure corresponds to the recorded image or signal is formed on the surface of the film. This system of recording and reproduction of information was developed in the late 1950’s by W. E. Glenn (USA) as a means of recording television programs.

In the process of recording, the thermoplastic film is first given an electric charge, such that the surface charge density at each point corresponds to the intensity of the recorded image (Figure l,a). The thermoplastic layer is then melted—for example, by infrared radiation. The action of the electrostatic forces between the surface charges and the charges arising in the conducting layer of the film as a consequence of electrostatic induction produces a relief on the thermoplastic layer (Figure l,b). The depth of the relief at each point is determined by the charge density and, consequently, by the intensity of the image. The thermoplastic layer is then allowed to solidify. The depth of the relief usually does not exceed 1 micrometer.

A checkerboard pattern is imparted to the charge structure; in thermoplastic recording with a photosensitive layer, for example, this is achieved by focusing the image on the film through a lattice. Thus, the resulting relief is an arrangement of parallel grooves of varying depth. In thermoplastic recording, as distinct from photography, it is not the optical density of the film but rather its refractivity that varies; the variation is such that the relief is a system with phase modulation of light, similar to a phase diffraction grating.

Figure 1. Structure of a thermoplastic film and its surface before (a) and after (b) the formation of relief: (1) thermoplastic layer 1–10 μ thick, (2) electrically conducting layer 10–100 nm thick, (3) base 10–50 μ thick; the plus and minus signs indicate electric charges

The recorded relief image is played back by optical systems. The operation of the playback systems is based on the fact that when a light wave passes through or is reflected from a film of varying density, its phase is changed: the wave acquires phase relief, which repeats the relief on the film. These phase changes are transformed by special devices into amplitude changes—that is, changes in intensity of the black-and-white image produced on a screen. The optical system is designed in such a way that if a segment of film without a recording (a plane-parallel segment; Figure 2,a) is fed into it, all the light rays passing through the condenser and film strike nontransparent gates and are not transmitted to the screen. In the presence of a recording (Figure 2,b), the light is scattered on the irregularities of the film, resulting in its partial passage between the gates and through the projection lens to the screen, creating an optical image of the scattering centers of the relief on the screen. Systems may also be designed for the production of color images. 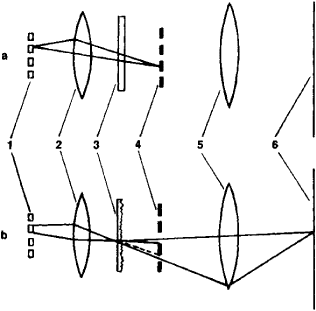 Figure 2. Playback of an image in black-and-white thermoplastic recording, illustrating the passage of light rays through an unexposed segment of film (a) and a segment with a relief image (b): (1) slit light sources, (2) condenser, (3) film, (4) nontransparent gates, (5) projection lens, (6) screen

Thermoplastic recording is suitable for use in areas other than television, such as holography and aerial photographic surveying. The reasons for this are the extremely high resolution of thermoplastic and photosensitive thermoplastic films (up to several thousand lines per millimeter) and the fact that the sensitivity of the films is usually much higher than that of still and motion-picture films of equivalent resolving power.