(tûr'gôvēsh`tĕ), town (1990 pop. 100,948), S central Romania, in Walachia, in a petroleum-producing region. Oil refining and the manufacture of oil-field equipment and iron and steel are the chief industries. Tîrgovişte was the administrative, political, and cultural center of Walachia from 1383 until 1698, when the capital was moved to Bucharest. It was destroyed by the Turks in 1737. The town is now the seat of an Orthodox bishopric. Many tourists are attracted by Tîrgovişte's historic buildings, including a remarkable 16th-century cathedral with nine towers, a 15th-century monastery, and the ruins of a 14th-century castle.
The Columbia Electronic Encyclopedia™ Copyright © 2013, Columbia University Press. Licensed from Columbia University Press. All rights reserved. www.cc.columbia.edu/cu/cup/ 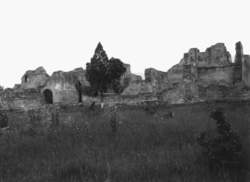 The ruins of Vlad the Impaler’s palace in Tirgoviste. A statue of Vlad the Impaler in Tirgoviste, Romania.

Tirgoviste, the former capital of Wallachia and the section of modern Romania south of the Carpathian Mountains, was the location of the palace where Dracula resided during his years as the prince of Wallachia. The capital of Wallachia was moved to Tirgoviste from Curtea de Arges in 1415 and there, Mircea the Old, one of Dracula’s ancestors, erected the palace that became the seat of power for the prince. During the next century and a half, numerous claimants to the throne briefly resided at Tirgoviste in the unstable situation created by the varying fortunes of Wallachia’s powerful neighbors.

Vlad the Impaler, the historical Dracula, first moved to Tirgoviste in 1436 when his father, Vlad Dracul, became the prince of Wallachia. He lived there only six years before he was sent to live among the Turks as a hostage to ensure his father’s goodwill toward the Ottoman Empire. Vlad returned to Tirgoviste for a brief month in October 1448, when he attempted to assume the throne following the death of his father. He was driven from Tirgoviste by Vladislav II and fled to Moldavia. It was not until Vladislav turned on his Hungarian sponsors and fought against John Hunyadi that Vlad became the Hungarian candidate to hold the throne. He again took up residence in his childhood home in the spring of 1456.

Vlad would rule only six years, but he filled those years with a lifetime of adventure and earned his title, Tepes, or “the Impaler.” The yard in front of the palace became the site of numerous executions by impalement. Vlad had the Chinda (Sunset) Tower built adjacent to the palace to provide an observation post for viewing the work of the executioners. The first notable event of his brief reign probably occurred on Easter of 1459. He invited the many boyars (feudal land owners) to an Easter feast. After they spent the day eating and drinking, Vlad had his soldiers surround the palace, and he arrested the boyars and their families. The elders were immediately killed, but the remainder were marched away to Curtea de Arges to build Vlad’s mountain castle.

Vlad’s six years of rule culminated at the gates of Tirgoviste in June 1462. For two months, he had fought a losing battle across Wallachia. The Turkish army, led by Mohammed II (1432–1481), arrived at Tirgoviste only to find the impaled bodies of all the Turks who had been taken prisoner. Mohammed II turned back and returned to Adrianople. Vlad followed the retreating army and constantly harassed it. However, Mohammed II gave his army to Vlad’s brother Radu cel Frumos who had gained the support of the remaining boyars. Radu chased Vlad to his castle north of Curtea de Arges and, finally, out of the country.

Vlad lived as a prisoner of the Hungarians for more than a decade. He gradually gained the support of King Matthias for his return to the Wallachian’s throne. Vlad returned to Tirgoviste in 1476. His stay was short. He moved on to Bucharest just one week later. In December of that year, the Turkish army attacked and the boyars turned on Vlad and killed him. The exact fate of his body is unknown. Tirgoviste remained the capital of Wallachia until 1660 when it was officially relocated to Bucharest. In the 1990s, it began to develop as a tourist site. Vlad’s Tower has been opened as a museum, and visitors may wander through the palace grounds. Statues of Vlad may be found in nearby parks.

The Vampire Book, Second Edition © 2011 Visible Ink Press®. All rights reserved.
The following article is from The Great Soviet Encyclopedia (1979). It might be outdated or ideologically biased.

Feedback
Flashcards & Bookmarks ?
Please log in or register to use Flashcards and Bookmarks. You can also log in with
Flashcards ?
My bookmarks ?
+ Add current page to bookmarks
References in periodicals archive ?
(2.) Tesfaye S, Stevens LK, Stephenson JM, Fuller JH, Plater M, Ionescu- Tirgoviste C et al.
Nerve conduction in type 2 diabetics and its correlation with glycosylated haemoglobin
Tesfaye S, Chaturvedi N, Eaton SE, Ward JD, Manes C, Ionescu- Tirgoviste C, et al.
Diabetic Neuropathy: Part 2
(31.) Tirgoviste CI, Strachinariu R, Farcasiu E, Milicevic Z, Teodorescu G.
Importance of daily plasma glucose control in type 2 diabetes
univ., "Valahia" University, Tirgoviste E-mail: ancutapirvan@yahoo.com
The evolution of body segmentation methods for the determination of the general mass centre
It was this period that sealed his reputation as Vlad the Impaler as the Ottoman Turks preferred to call him, particularly after the ghastly sight that greeted Mehmet the Conqueror one day in the summer of 1462 outside Vlad's capital at Tirgoviste. It was described by the Byzantine historian, Leonikos Chalkokondyles: `The Sultan's army came across a field with stakes, about three kilometres long and one kilometre wide.
DraculaWorld. (Frontline)
(Tirgoviste, Romania) (see M.I.R., 3/21/00) and subsequently renamed it Wisconsin Turning Systems.
Wisconsin Machine Tool Will Move Manufacturing to its Romanian Plants
Tirgoviste is where he spent his youth and more recently where Romania's modern monsters, the Ceausescus, were executed.
Just fang-tastic
Despite a few successful attempts to challenge the hegemony of consensus realism, the most recent of which engaged two different generations of writers simultaneously (the "Tirgoviste group" of belated avant-gardists, and the "poststructuralist" fiction-writers of the eighties), the mimetic bias still informed much of the pre-1989 criticism.
Critical theory and the Glasnost phenomenon: ideological reconstruction in Romanian literary and political culture
With the Saro lathe-factory acquisition in Tirgoviste, Wisconsin Machine Tool sees only good potential.
Buying Romanian Builder Puts Wisconsin MT Into Low-Cost Lathes
Principal battles: Byczyna (1588); Tirgoviste (1600).
Zamojski (Zamoyski), Jan (1541-1605)
Encyclopedia browser ?
Full browser ?
CITE
Site: Follow: Share:
Open / Close