tuberous-rooted perennial (Helianthus tuberosus) of the family Asteraceae (asteraster
[Gr.,=star], common name for the Asteraceae (Compositae), the aster family, in North America, name for plants of the genus Aster, sometimes called wild asters, and for a related plant more correctly called China aster (Callistephus chinensis
..... Click the link for more information.  family), native to North America, where it was early cultivated by the indigenous inhabitants. In this particular case the name Jerusalem is a corruption of girasole [turning toward the sun], the Italian name for sunflowersunflower,
any plant of the genus Helianthus of the family Asteraceae (aster family), annual or perennial herbs native to the New World and common throughout the United States.
..... Click the link for more information. , of which this plant is one species. The edible tubers are somewhat potatolike, but the carbohydrate present is inulin rather than starch, and the flavor resembles that of artichokes. Jerusalem artichoke is more favored as a food plant in Europe (where it was introduced in 1616) and China than in North America, where it is most frequently grown as stock feed. The inulin is valuable also as a source of fructose for diabetics. Jerusalem artichokes are classified in the division MagnoliophytaMagnoliophyta
, division of the plant kingdom consisting of those organisms commonly called the flowering plants, or angiosperms. The angiosperms have leaves, stems, and roots, and vascular, or conducting, tissue (xylem and phloem).
..... Click the link for more information. , class Magnoliopsida, order Asterales, family Asteraceae.
The Columbia Electronic Encyclopedia™ Copyright © 2013, Columbia University Press. Licensed from Columbia University Press. All rights reserved. www.cc.columbia.edu/cu/cup/ 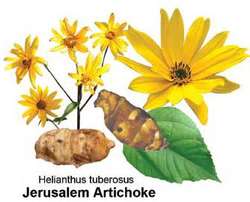 Related to sunflowers. Not an artichoke. Yellow flowers, up to 9 ft tall. The root (tuber) is the part you want- it looks like ginger and is edible after first frost and throughout winter. Slice raw into salad. Root is made of inulin which is good for low-starch diets, treating diabetes and leaky gut syndrome. Inulin also feeds probiotics and multiplies the good flora in your gut, which helps fight candida yeast and aids digestion. The tubers are sometimes used as a substitute for potatoes. They have a similar consistency, and in their raw form have a similar texture, but a sweeter, nuttier flavor; raw and sliced thinly, they are fit for a salad. Can be steamed. Juice from the root is sweet and can be used as a sugar substitute by diabetics. Good for heartburn, high blood pressure and rheumatism. Inulin can’t be broken down by our digestive system, so it can cause gas. Hard thick sandpapery leaves and flowers used to make tea for rheumatism.
Edible Plant Guide © 2012 Markus Rothkranz
The following article is from The Great Soviet Encyclopedia (1979). It might be outdated or ideologically biased.

(Helianthus tuberosus), also girasol, a perennial tuberous plant of the family Compositae. The aboveground portion of the Jerusalem artichoke resembles a sunflower. The strong, erect stem branches terminally and is 1.2–2.5 m high (in southern regions, sometimes as high as 4 m). The petiolate leaves are ovate and pointed at the narrow tip. The root system is large and deep. White, yellow, violet, and red tubers form on the underground stems (stolons).

The Jerusalem artichoke is native to North America, where it was cultivated by the Indians before the arrival of the Europeans. It was introduced into Europe in the early 17th century. The plant is cultivated in many countries, including the USA, France, Great Britain, Norway, Sweden, the Socialist Republic of Rumania, and the Hungarian People’s Republic. It has been cultivated in Russia since the 18th century. The Jerusalem artichoke is a valuable feed, industrial, and food crop. The tubers contain the soluble polysaccharide inulin (16–18 percent), nitrogenous substances (2–3 percent), vitamin C, and B-complex vitamins. They are used as food and in the industrial production of alcohol and fructose. The tubers and tops are used as livestock feed in both fresh and ensiled form. One hundred kilograms of the tubers contain 22–25 feed units and 1.5 kg of digestible protein; 100 kg of the tops contain 22–23 feed units and 1.8 kg of digestible protein. The silage and the tubers are readily eaten by cattle, pigs, sheep, and horses. The tubers are also used to feed poultry and rabbits.

In the USSR the Jerusalem artichoke is cultivated in the central and northwestern regions of the nonchernozem zone, as well as in the Baltic region. It is grown mainly for silage. The plant is cultivated on lands attached to farms or in feed crop rotations (used for four or five years). Planting is done in the spring or autumn with potato planters in clusters 70 × 70 cm or 60 × 60 cm or by plow in clusters 60 × 60 cm. Care involves loosening the in-terrow areas and the application of fertilizers. The tubers are gathered with potato-harvesting combines or with potato-digging machines. The green-mass yield is 350–500 quintals per hectare, and the tuber yield is 200–250 quintals per hectare. The tubers store well in the ground and often are dug out as needed.

1. a North American sunflower, Helianthus tuberosus, widely cultivated for its underground edible tubers
2. the tuber of this plant, which is cooked and eaten as a vegetable
Collins Discovery Encyclopedia, 1st edition © HarperCollins Publishers 2005

Feedback
Flashcards & Bookmarks ?
Please log in or register to use Flashcards and Bookmarks. You can also log in with
Flashcards ?
My bookmarks ?
+ Add current page to bookmarks
Mentioned in ?
References in periodicals archive ?
For example, endpoint protection and checking file hashes after downloading installation software would help to protect against threats like Topinambour," - said Kurt Baumgartner, principal security researcher at Kaspersky.
Hacking group hides malware in anti-internet censorship software
A percentage of Topinambour's winnings over the next three years will go towards the charity's humanitarian work in the UK and overseas.
Karen Jones, senior fundraiser for the Cheshire branch of the British Red Cross, said: "We are very grateful to Dave and, of course, Topinambour.
Topinambour is stabled at Folly Farm stables in Tarporley He has raced 15 times in France - where he already has some wins under his belt - and it is hoped he will race at Aintree this November.
Paper cures Domino's cough; Owner of allergic horse finds a novel answer, as Sam Lister reports
Topinambour earned pounds 4,554 for the British Red Cross, to whom all prize-money he earns is being donated by owner Dave Watson, by winning the beginners' chase.
Horse Racing: McCain eyes Wetherby target with Gentian; CARTMEL
RICHARD FORD-trained chaser Topinambour will be running to raise money for the Red Cross this season thanks to a donation by Warrington businessman Dave Watson, writes David Carr.
"Topinambour is ready to run at the moment, but if you look at his history in France he needs good ground.
Horse Racing: Ford chaser to run for Red Cross