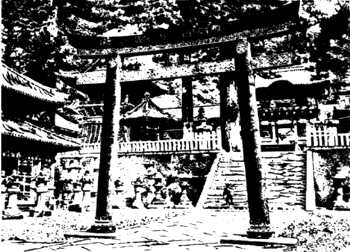 torii at Nikko, Japan
A monumental, freestanding gateway to a Shinto shrine, consisting of two pillars with a straight crosspiece at the top and lintel above it, usually curving upward.
McGraw-Hill Dictionary of Architecture and Construction. Copyright © 2003 by McGraw-Hill Companies, Inc.

Feedback
Flashcards & Bookmarks ?
Please log in or register to use Flashcards and Bookmarks. You can also log in with
Flashcards ?
My bookmarks ?
+ Add current page to bookmarks
Mentioned in ?
References in periodicals archive ?
SOMETHING OLD, SOMETHING NEW: Tokyo's dazzling neon lights with Mount Fuji in the background; BEAUTY: Golden Temple and 'floating' Torii gate are must-see Japanese attractions
TRAVEL: JAPAN EASY; Alex Smith discovers you won't need a lottery win to visit Land of Rising Sun
Still, like most foreign tourists, they enjoyed the view of the torii gate of Itsukushima Shrine in Miyajima Island in Hiroshima, one of the three most beautiful spots in Japan.
FEATURE: S. Korean mother, daughter learn about Japan on backpack trips
The island is known for the red torii gate of Itsukushima Shrine which rises up from the sea near its coast.
Sacred Music festival to be held in Hiroshima in June
Enter the site through a towering 40ft tall Torii Gate - the centre is reserved for gods so keep to one side - then follow the strict rules of the cleansing ritual before throwing coins into the Offering Box.
EXPAND YOUR HORIZONS; from traditional crafts to futuristic cafes, the japanese capital is simply magical, as damon smith discovers tr avel report TOKYO
The travel-worn group pushed through the second torii gate, the Japanese symbol for holy ground, flanked by Kornainu or Shishi, (lion statues that stand guard at such spiritual places).
Task force 76 sailors: climb Mount Fuji
He added that a new flower bed was constructed with approximately 2,000 assorted flowers and the Torii gate sign in front of the main CBH building was replaced.
NAF Misawa Bachelor Housing Wins Zumwalt
But I hope this will change," she says under the torii gates of the Meiji Shrine dedicated to the deified spirits of former Japanese royalty.
Hopes ignite for modern chapter for Japan with new royal couple
" CNN has called the 123 vermilion-colored torii gates that make up Motonosumi Inari Temple along the road to Nagato in Yamaguchi Prefecture one of the "31 Must-See Sites" of Japan.
Fugu, snowboarding riding camels on sand dunes? Yes, this is Western Japan
The inspiration derives from the vermillion lacquered torii gates leading to an ancient Kyoto shrine dedicated to Inari, the Shinto god of rice.
Zen Diagram: a new restaurant's upbeat design infuses a shot of Japanese culture into button-upped Seoul