(or tropoid), a compound containing the tropylium (cycloheptatrienylium) cation as a structural fragment of the molecule. The tropylium cation is an aromatic nonbenzenoid carbonium ion whose charge is delocalized among all the carbon atoms of the seven-carbon ring (I).

Salts. Cation (I) forms salts with strong acids. Methods for the preparation of these salts are based on the reaction of cyclohepta-triene with phosphorus pentahalides

or of benzene with halocarbenes

Tropylium salts are solids that are soluble in polar solvents. The melting points of tropylium chloride, bromide, and iodide are 102°, 203°, and 136°C, respectively. The resonance energy of (I) is 84 kilojoules per mole (kJ/mole), or 20 kilocalories per mole (kcal/mole); as a result, the salts are stable. Unlike other aromatic compounds, tropylium salts do not react with electro-philic reagents. Nucleophiles, including weak acids, convert tropylium salts into substituted cycloheptatrienes with covalent structure:

Tropone is a colorless liquid with melting point – 5°C and boiling point 113°C (at 2 meganewtons per sq m, or 15 mm Hg); it is miscible with water. Tropone has the properties of an unsaturated ketone: it adds Br2 and H2 and forms an oxime, semicarbazone, and phenylhydrazone. It also reacts with acids to yield hydroxy-tropylium salts (IV).

Tropolones. Tropolones are derivatives of hydroxytropone. The resonance energy of the tropolone system is 126 kJ/mole, or 30 kcal/mole, and additional stabilization is provided by an intramolecular hydrogen bond (shown by the dotted line): 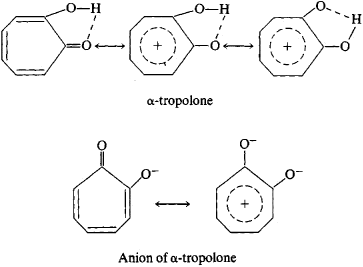 Tropolones are characterized by a high dipole moment (about 3.7D). In their chemical properties they are similar to phenols: they react with alkalies and readily enter into several electro-philic substitution reactions, including bromination, azo coupling, and hydroxymethylation. However, tropolones do not undergo sulfonation and do not enter into the Friedel-Crafts reaction. Tropolones are stronger acids than phenols, and their alkyl esters and amino derivatives are easily hydrolyzed. Tropolones do not yield derivatives at the carbonyl group (oximes and semicarbazides), and they enter into diene synthesis reactions as dienes. The tropolone structure is the main feature of the alkaloid colchicine and a number of other natural compounds. Many tropolones have fungicidal and bacteriostatic action.