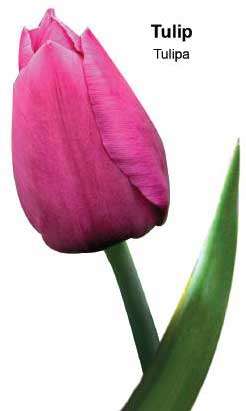 Eat only the petals, never the bulb. Flavor varies from tulip to tulip, but generally the petals taste like a cross between sweet lettuce, peas and cucumber. NOTE: Some people have strong allergic reactions. If touching them causes a rash or numbness, don't eat them! Don't eat the bulbs ever. If you have any doubts, don't eat the flower.
Edible Plant Guide © 2012 Markus Rothkranz
The following article is from The Great Soviet Encyclopedia (1979). It might be outdated or ideologically biased.

(tulip), a genus of perennial herbaceous plants of the family Liliaceae. The tunicate bulb is ovate or, less commonly, elongate-oval or rounded-oval. The cylindrical and erect stem is 6–50 cm in height and bears two to six leaves. It ends in a single brightly colored flower (rarely in several flowers) that opens in sunny daylight and closes at night or in overcast weather. The fruit is a trihedral capsule, with flat brownish yellow seeds. Fertilization is by cross-pollination. Tulips propagate by seeds; in culture they are raised from seeds or from daughter bulbs, which form in the axils of the scales of the maternal bulb.

There are about 140 tulip species, growing mainly in Southern Europe, Asia Minor, and East and Southwest Asia. The USSR has 83 species: most are found in Middle Asia, but a few occur in the Caucasus, in Siberia, and in the southern and central regions of the European USSR.

The more than 4,000 cultivated varieties are descended from wild tulips and are united in the species T. gesneriaana. Each variety is distinguished by its flower’s shape (flask-shaped, cup-shaped, oval, spherical, lily-like, peony-like, parrot-shaped) and coloration (all shades of red to near black, orange, yellow, violet, white, variegated). There are fragrant and scentless varieties. The flowering period is up to 15 days for early varieties and 25 to 30 days for late varieties.

Tulips, including some wild species, are used in spring flower beds and borders, for cuttings, and for forcing in the winter. They were first cultivated in the 16th century in Turkey. At the beginning of the 17th century tulips were imported into the Netherlands, where the breeding and selection of tulips took on an industrial scale. Tulips have been known in Russia since 1702, but bulbs have been grown only since the late 19th century. In recent years tulip cultivation has been concentrated in the Netherlands (the principal exporter of bulbs), Great Britain, France, the Federal Republic of Germany, and the German Democratic Republic. In the USSR tulip culture has been developed as a measure to beautify cities and settlements. Commercial tulip culture is concentrated in the Northern Caucasus, the Crimea, Middle Asia, the Baltic region, and the Moscow region.

Tulips prefer sandy-loam soils rich in humus. The bulbs are set out in open ground in the fall (September-November); flowering occurs in May and June. In late June or early July the bulbs are dug up, dried in the shade, and stored in a cool place until they are set out in the autumn.

Feedback
Flashcards & Bookmarks ?
Please log in or register to use Flashcards and Bookmarks. You can also log in with
Flashcards ?
My bookmarks ?
+ Add current page to bookmarks
Mentioned in ?
References in periodicals archive ?
12-14), quite different from those of Rhyssoplax tulipa and other species of Chitoninae.
On fertilization in Chaetopleura apiculata and selected Chitonida
The firm hope other top wine brands will also use the Tulipa.
A glassy idea for wine fans
His wife, Constance Nicandrou, is also a tulip-lover and has established the 'Art in Wild Tulip Project', a project which raises awareness of the Tulipa Agenensis and funds through art.
Paphos village prepares for ever-popular tulip festival
Right, a red Tulipa armena in south Turkey and Iris ensata in Italy
ROOTED IN HISTORY; RIGHT AT HOME Carol explores the early days of the rose, tulip, iris and water lily in fascinating four-part TV series
Among my personal favourites are Tulipa clusiana "Lady Jane", a delicate, fine-boned specie tulip which grows to just 20cm.
gardening: Plant now to get the best for spring
The 6-4 shot was anchored in the rear by Timmy Murphy in the early stages of the race but was pulling a bus when sat in behind the duelling pair Tulipa and Pirandello before two out.
Huntingdon: Cruzspiel pleases on hurdles debut for Fanshawe
This is true whether you live in a cold climate where Darwin and other hybrid tulips rebloom for several years, or in a mild climate where you can grow species types (Tulipa bakeri 'Lilac Wonder', for instance) that come back year after year.
Feeding tulips. (Back to Basics)
STRIKING: Narcissus Canaliculatus; MULTI-COLOURED: Poppy anemone; BEAUTIFUL: Tulipa Red Riding Hood
FREE BULBS FOR EVERY READER
Meanwhile, as expected, Silver Patriarch, Desert King and Tulipa were all taken out of the Arc line-up yesterday.
BARRY IS SET FOR TV FLY-ER
Tulipa 'Abu Hassan' | BLUES BROTHERS OCTOBER and November are good months for planting tulips, although you can carry on through December as long as bulbs stay firm and fat.
Repotting for winter; diary
The most graceful is the diminutive lady tulip, Tulipa clusiana, either in its species form with pink and white flowers or its variety 'Cynthia', where its pink petals are outlined in pale lemon.
Tool up for tulips; Inject glamour, grace, colour and drama into your garden with tulips, joyous plants that make you long for the springtime