A fluid motion in which velocity, pressure, and other flow quantities fluctuate irregularly in time and space. The illustration shows a slice of a water jet emerging from a circular orifice into a tank of still water. A small amount of fluorescent dye mixed in the jet makes it visible when suitably illuminated by laser light, and tags the water entering the tank. There is a small region close to the orifice where the dye concentration does not vary with position, or with time at a given position. This represents a steady laminar state. Generally in laminar motion, all variations of flow quantities, such as dye concentration, fluid velocity, and pressure, are smooth and gradual in time and space. Farther downstream, the jet undergoes a transition to a new state in which the eddy patterns are complex, and flow quantities (including vorticity) fluctuate randomly in time and three-dimensional space. This is the turbulent state. See Jet flow, Laminar flow 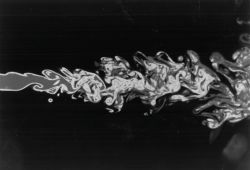 Two-dimensional image of an axisymmetric water jet, obtained by the laser-induced fluorescence technique

Turbulence occurs nearly everywhere in nature. It is characterized by the efficient dispersion and mixing of vorticity, heat, and contaminants. In flows over solid bodies such as airplane wings or turbine blades, or in confined flows through ducts and pipelines, turbulence is responsible for increased drag and heat transfer. Turbulence is therefore a subject of great engineering interest. On the other hand, as an example of collective interaction of many coupled degrees of freedom, it is also a subject at the forefront of classical physics. See Degree of freedom (mechanics), Diffusion, Heat transfer

The illustration demonstrates the principal issues associated with turbulent flows. The first is the mechanism (or mechanisms) responsible for transition from the steady laminar state to the turbulent state. A second issue concerns the description of fully developed turbulence typified by the complex state far downstream of the orifice. Finally, it is of technological importance to be able to alter the flow behavior to suit particular needs. Less is known about eddy motions on the scale of centimeters and millimeters than about atomic structure on the subnanometer scale, reflecting the complexity of the turbulence problem. See Navier-Stokes equation

A central role in determining the state of fluid motion is played by the Reynolds number. In general, a given flow undergoes a succession of instabilities with increasing Reynolds number and, at some point, turbulence appears more or less abruptly. It has long been thought that the origin of turbulence can be understood by sequentially examining the instabilities. This sequence depends on the particular flow and, in many circumstances, is sensitive to a number of details. A careful analysis of the perturbed equations of motion has resulted in a good understanding of the first two instabilities in a variety of circumstances. See Reynolds number

Given this situation, much of the progress in the field has been due to (1) exploratory experiments and numerical simulations of the Navier-Stokes equations at low Reynolds numbers; and (2) plausible hypotheses in conjunction with dimensional reasoning, scaling arguments, and their experimental verification.

Some typical objectives of flow control are the reduction of drag of an object such as an airplane wing, the suppression of combustion instabilities, and the suppression of vortex shedding behind bluff bodies. Interest in flow control has been stimulated by the discovery that some turbulent flows possess a certain degree of spatial coherence at large scales. Successful control has also been achieved through the reduction of the skin friction on a flat plate by making small longitudinal grooves, the so-called riblets, on the plate surface, imitating shark skin. See Fluid flow

Turbulent flows differ from the corresponding laminar flows in that the turbulent flows have a complex internal structure, a different distribution of the averaged velocity over a cross section of the flow, and different overall characteristics, that is, a different dependence on the Reynolds number Re of the flow rate, the resistance coefficient, and the average mean velocity over a cross section or the maximum velocity. The averaged velocity profile of a turbulent flow in a pipe or channel differs from the parabolic profile of the corresponding laminar flow in that the former is characterized by a faster increase in velocity at the walls and a smaller curvature in the central part of the flow (Figure 1). With the exception of a thin layer near the wall, the velocity profile is described by a logarithmic law; that is, the velocity is linearly dependent on the logarithm of the distance to the wall. The relationship between the resistance coefficient

(where τw is the shearing stress at the wall, ρ is the density of the fluid, and vav is the fluid velocity averaged over a cross section of the flow) and Re is given by the equation

where K and B are constants.

Figure 1. Averaged velocity profile: (a) for a laminar flow, (b) for a turbulent flow

In contrast to laminar boundary layers, a turbulent boundary layer usually has a distinct edge that fluctuates randomly with time in the range 0.4δ–1.2δ, where δ is the distance from the wall at which the averaged velocity is 0.99v, and v is the velocity outside the boundary layer. The averaged velocity profile in the wall region of a turbulent boundary layer is described by a logarithmic law, but in the outer region the velocity increases with distance from the wall more rapidly than it would in accordance with a logarithmic law. In this case, the dependence of λ on Re has a form analogous to that indicated above.

Jets, wakes, and mixing zones are approximately self-similar. Self-similarity here means that in every cross section x = const of any of these turbulent flows, where the distance x from some initial cross section is not too small, there can be introduced length and velocity scales L(x) and v(x) such that the dimensionless statistical characteristics of the hydrodynamical fields (in particular, the averaged velocity profiles) obtained by using these scales will be identical in all cross sections.

In the case of free turbulent flows, the region of space occupied by an eddying turbulent flow has at every moment in time distinct but very irregular boundaries outside which the flow is irrotational. The turbulence mixing zone in this case is more extensive than in boundary layers.

The motion of a fluid in which local velocities and pressures fluctuate highly irregularly with time, in contrast to streamline flow.
McGraw-Hill Dictionary of Architecture and Construction. Copyright © 2003 by McGraw-Hill Companies, Inc.

Feedback
Flashcards & Bookmarks ?
Please log in or register to use Flashcards and Bookmarks. You can also log in with
Flashcards ?
My bookmarks ?
+ Add current page to bookmarks
Mentioned in ?
References in periodicals archive ?
Zhao, "A model for evaluating the particle penetration efficiency in a ninety-degree bend with a circular-cross section in laminar and turbulent flow regions," Powder Technology, vol.
Experimental Views of Tran-Bend Particle Deposition in Turbulent Flow with Nanoscale Effect
Turbulent Flow. Figure 3 shows a domain velocity field plot for a characteristic inflow velocity of 22.2 cm x [s.sup.-1] inside the CPC reactor.
Simulations of a Single-Phase Flow in a Compound Parabolic Concentrator Reactor
Mean velocity profiles of fully-developed turbulent flows near smooth walls.
Mean velocity and suspended sediment concentration profile model of turbulent shear flow with probability density function
This is because of a strong mixing of the fluid induced form turbulent flow and appearance of reverse flow between the adjacent smooth elements.
Performance of the heat transfer behavior of Tri Ethylene Glycol (TEG) based cuo and sin nanofluids in a rectangular pipe under the turbulent flow condition
Wind tunnel tests with a mix of smooth and rough surfaces on airfoils show that the point of separation from laminar to turbulent flow preferentially favors areas of increased roughness.
Keep it clean: even small amounts of snow or frost on your airplane is more insidious than you may think. This is way too much
B.: "Turbulent Flows", Cambridge University Press, 2000.
Influencia de la gravedad sobre las estadisticas de velocidad de particulas solidas inmersas en un flujo turbulento a traves de un canal y una tuberia con igual numero de Karman
Thanks to a highly turbulent flow they have a significantly higher thermal efficiency than a shell-and-tube.
Alfa Laval's tantalum minimizes lifecycle costs
The river has a surfeit of chemicals from farms upstream and probably a shortage of oxygen from lack of natural turbulent flow which can aerate the water.
River project is a fantasy; Letters
Scientists hypothesized that dolphins somehow reduce drag by creating smooth, laminar flow in water rushing by their skin instead of the usual turbulent flow. By filming bottlenose dolphins swimming through a curtain of tiny air bubbles, Frank Fish of West Chester University in Pennsylvania and colleagues used the frame-to-frame shifts in bubble position to work out how much thrust the dolphins produced.
Swimming dolphins don't cheat
The smooth element geometry results in efficient mixing of miscible fluids in laminar or turbulent flow and dispersion of immiscible fluids or gases while producing a very low pressure drop.
Chemineer, Inc
[2] investigated the heat transfer coefficient and fluid flow characteristic of [Al.sub.2][O.sub.3] nanoparticles dispersed in water flowing through a liquid cooling system of microprocessors under turbulent flow condition.
Heat transfer of nanofluid in a double pipe heat exchanger