Brahe, Tycho (tīˈkō brä), 1546–1601, Danish astronomer. The most prominent astronomer of the late 16th cent., he paved the way for future discoveries by improving instruments and by his precision in fixing the positions of planets and stars. From Brahe's exact observations of the planets, Kepler devised his laws of planetary motions (see Kepler's laws). Brahe's achievements included the study of a supernova (first observed in 1572 and now known as Tycho's supernova) in the constellation Cassiopeia and the discoveries of a variation in the inclination of the lunar orbit and of the fourth inequality of the moon's motion. He never fully accepted the Copernican system but made a compromise between it and the Ptolemaic system. In the Tychonic system, the earth was the immobile body around which the sun revolved, and the five planets then known revolved around the sun. Given funds by the Danish king Frederick II, Brahe built on the island of Ven a castle, Uranienborg, and an observatory, Stjarneborg. He was deprived of his revenues by Christian IV in 1596 and left Ven (1597); in 1599 he settled near Prague under the patronage of the German emperor Rudolf II. He published (1588) De mundi aetherii recentioribus phaenomenis, the second volume of a projected three-volume work on his astronomical observations; from an incomplete manuscript and notes Kepler edited Volume I, Astronomiae instauratae progymnasmata (1602). Brahe's Astronomiae instauratae mechanica (1598) contained his autobiography and a description of his instruments. 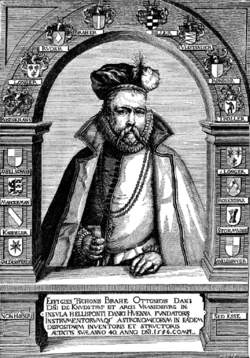