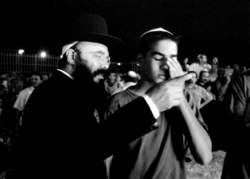 Rabbi Yaakov Ifargan, a tzaddik, offers help to a blind Jewish man. Many believe tzaddiks have supernatural abilities to look into people’s lives and show them the right path to follow. Time Life Pictures/Getty Images.

A tzaddik (or zaddik; literally, “a righteous man”) is a title usually given to the leader of one of the various Hassidic Jewish groups. The tzaddik is generally considered to be a person who has conquered his (or occasionally her) evil inclinations, such as pride, to live a life of humility. They strongly identify with the oppressed. Righteous people are often also believed to have extraordinary spiritual or mystical powers.

Many consider Noah to have been the first tzaddik. He is described in Genesis 6:9 as a “just man and perfect in his generations, and Noah walked with God.” The idea of a just person has been discussed throughout Jewish history. Scholars have argued over how many there were at any given moment, noting that many would be ordinary people whose goodness would go unacknowledged by their own local community. These people form a class known in the Jewish tradition as the hidden tzaddikim. However, in the eighteenth century the term began to be applied especially to the leadersof the emerging Hassidic movement, an orthodox mystical sect that arose in eastern Europe.

As the leader of a Hassidic community, however, the tzaddik is a public person to whom is ascribed supernatural abilities. People bring to the tzaddik a spectrum of spiritual and mundane problems with the hope of receiving miracles or some kind of extraordinary insights. Many believe that the tzaddik has special knowledge of the purpose for an individual’s life, and that they can thus draw information by accessing the deepest levels of a soul. Thus, members of the community tend to listen carefully to the admonitions and words of guidance from these rebbe (holy men).

Among the most famous tzaddiks of the last century were Aryeh Levin (1889–1969), Joel Teitelbaum (d. 1979), and Menachem Mendel Schneersohn (1904–1996). Rav Aryeh, as Aryeh Levin was popularly called, lived in Jerusalem in the days both prior to and just after the formation of Israel. He became particularly well known for his compassion and concern for the sick and those in prison. He regularly visited the local lepers’ hospital and worked to refurbish its facilities. He also visited the central Jerusalem jail, which housed many political prisoners, and held prayer services there on the Sabbath.

Teitelbaum, the head of the Satmar Hassidic community, was best known for his opposition to Zionism and the secular state of Israel. He believed that the establishment of a religious state in Palestine would be accomplished by God and that the Jews should wait for God to accomplish that end. He saw the founders of the present state of Israel as wrongfully assuming God’s prerogative.

Schneersohn was the leader of the Lubavitcher community, which under his leadership became the largest and most geographically widespread of the several Hassidic groups. It became the focus of Jewish messianic expectations toward the end of his life. As the level of devotion grew, many came to see him in unique terms. They believed he had supernatural powers of insight and that he could even alter the course of world events. Miracle stories were collected and circulated about Schneersohn. When he died, many believed that he would return, and the Lubavitcher community decided to wait for him before taking any further actions. In the years since his death, his followers have yet to name a new leader.

Feedback
Flashcards & Bookmarks ?
Please log in or register to use Flashcards and Bookmarks. You can also log in with
Flashcards ?
My bookmarks ?
+ Add current page to bookmarks
References in periodicals archive ?
From Sorrow (Trumpet, Horn, Bass Trombone) Sirulnikoff, Jack Little Suite Skolnik, Walter Divertimento Smit, Leo Tzadik Smith Theme and Variations Snyder, Randall Dance Suite Stephenson, James M.
Brass Trio Repertoire: Beyond Poulenc
Daniel Boswell, Roger O'Shea, and Efrat Tzadik. Oxford : Interdisciplinary P, 2012.
Gender identity construction through talk about video games
What led me to volunteer these remarks was the experience of walking into Mnuchin and seeing a spectacular gathering of nine Veils by Louis, among them Beth Samach, 1958; Curtain, 1958 (a sister to the sublime Terranean, made the same year); Tzadik, 1958; and Dawn, 1958-59; plus a smaller pair, End of Fall, 1959-60; and the fiercely intense Italian Veil, dated 1960 but probably painted earlier, to name my favorites on this occasion.
"Morris Louis: Veils": Mnuchin Gallery, New York
Tzadik Management of Miami announced its acquisition of the 2,199-unit portfolio on Wednesday.
Avesta Sells $81 Million Apartment Complex Portfolio
Rubin says: "He is a tzadik. One of the chasidei umot ba'olaw, the righteous gentiles." Rosenthal agrees.
A priest bears witness: Father Patrick Desbois is on a mission to uncover the mass graves of nearly two million Jews. 60 year after the holocaust, time is running out
A friend helped Crandell put those out on CD last year; this release party is for those albums, plus two mbira recordings from Zorn's Tzadik label.
In Crandell's hands, the mbira sings
Rothenberg recently also released two albums on John Zorn's Tzadik label.
This sounds like a real good reed; What's On Jazz
When a terrible drought threatens the land of Eretz Yisroel, two messengers come to the great tzadik to ask for his help in prayer to bring rain.
Shadow Play
Jeremiah 23:6 says that "this is the name by which he will be called: 'The LORD is our righteousness.'" Righteousness is the translation of tzadik, which also carries the concept of legitimacy.
The Reign of Christ: November 21, 2004
On the Level" (Yatzata tzadik) is a watchdog program with a difference: Instead of weeding out rogue traders, it is on the lookout for the honest ones.
Israel: 'On the Level'
Encyclopedia browser ?
Full browser ?
CITE
Site: Follow: Share:
Open / Close