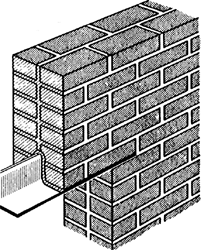 steel lintel
A concrete masonry unit having a single core with an open end; usually placed with its open end upright; such blocks form a continuous beam when filled with grout and proper reinforcement.
McGraw-Hill Dictionary of Architecture and Construction. Copyright © 2003 by McGraw-Hill Companies, Inc.

Feedback
Flashcards & Bookmarks ?
Please log in or register to use Flashcards and Bookmarks. You can also log in with
Flashcards ?
My bookmarks ?
+ Add current page to bookmarks
Mentioned in ?
References in periodicals archive ?
There are so many that it needs a full block in the Cabinet Division U-block to handle their U-turns,' she said, adding that 'in the first 50 days of the government, we have only witnessed ubiquitous U-turns'.
Nafisa proposes creation of 'ministry of U-turns'
The training camp was held at U-Block Ground New Multan.
Training camp for blind baseball team begins
He named the 30-60-90 degree triangle as the "big triangle." He also named a half-circle shape piece as a "U-block" by attending to the fact that the circular curve looked like an alphabet letter U.
Young children's block play and mathematical learning