(redirected from U.S.S. Maine)
The following article is from Conspiracies and Secret Societies. It is a summary of a conspiracy theory, not a statement of fact. 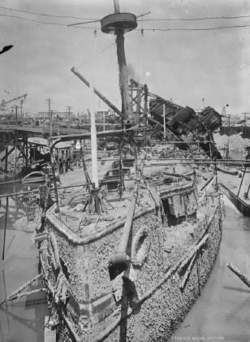 Feedback
Flashcards & Bookmarks ?
Please log in or register to use Flashcards and Bookmarks. You can also log in with
Flashcards ?
My bookmarks ?
+ Add current page to bookmarks
References in periodicals archive ?
Publicity in the United States of Spanish atrocities made a cause celebre, and pushed President William McKinley into sending the U.S.S. Maine on its ill-fated mission to protect American property in Havana in early 1898 in the midst of uprisings against a new, autonomous colonial government.
IMPERIALISM, AMERICAN-STYLE
The American public reacted with outrage in the aftermath of the violent and mysterious sinking of the U.S.S. Maine in Havana Harbor in February of 1898.
Challenges in irregular warfare: U.S. strategic messaging and the Cuban Revolution of 1898
As Alyn Brodsky recounts in Grover Cleveland: A Study in Character, he believed it would be "an outrage to declare war" on Spain even after the sinking of the U.S.S. Maine, and he ridiculed the yellow journalism that clamored for bloodshed.
Anti-imperial presidency: a 19th-century model for the right foreign-policy
When the U.S.S. Maine blew up and sunk in Havana Harbor on February 15, 1898 (not as a result of a Spanish mine, but due to an internal explosion), Assistant Secretary of the Navy Roosevelt ordered the American fleet to be placed on a war footing.
The fascinating first Roosevelt
Herring, there was no need to "sell" the Spanish-American War to the masses because of "yellow journalism," the insulting DeLome letter, and the sinking of the U.S.S. Maine. McKinley's war was popular with the masses, but annexing the Philippines was a harder sell.
Osgood, Kenneth, and Andrew K. Frank, eds.: Selling War in a Media Age: The Presidency and Public Opinion in the American Century
She has produced more than 30 science documentaries for public television, including the award-winning Superbugs: The Killer Viruses and Search for the U.S.S. Maine.
April program celebrates: 50th anniversary of USF
This one said "AND THE FIRST SHALL BE LAST/ Containing eight ingeniously related phrases." For example, 22 across, "The U.S.S. Maine was built there." The answer, Brooklyn Navy Yard, however, did not fit.
Notes from a cross and down competitor
A notable event, the sinking of the U.S.S. Maine in Havana harbor, provided an additional argument for war against Spain for those advocating it in the United States.
U.S. use of preemptive military force
Also potently told is the publisher's still-shocking exploitation of the Spanish-American War, fueling public rage at the sinking of the U.S.S. Maine in 1898 to sell papers, and inflaming hostilities which President McKinley later admitted might have been settled peacefully.
Hearst Over Hollywood: Power, Passion and Propaganda in the Movies
of Maine "to Remember the $1,000 U.S.S. Maine" Ria Leilani Baldevia Gilbert N.
2001 Voice of Democracy winners
on February 15, 1898, the battleship U.S.S. Maine blew up in the water off Havana, Cuba, killing 266 American sailors.
The Mystery of the Maine
Encyclopedia browser ?
Full browser ?
CITE
Site: Follow: Share:
Open / Close