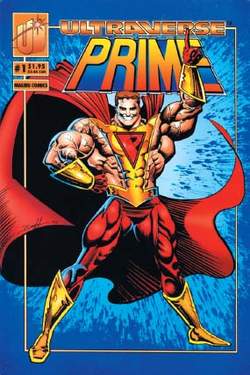 New superhero universes come and go, but few have had the flash-bulb success of the Ultraverse, a line of titles from Malibu Comics. Its diverse pantheon of heroes, including Prime, Mantra, the Strangers, the Night Man, and Ultra-Force, would not only garner press attention, but also spawn a line of toys, a cartoon, and a live-action television series, and set up a buy-out from one of the world’s most successful comic book publishers.

Malibu Comics was founded by Scott Rosenberg in 1986, but the company didn’t hit it big until 1992. That’s when a distribution deal with the just-beginning Image Comics brought Malibu a huge financial windfall, enabling it to start work on a shared superhero universe to be called the Ultraverse. Unlike Image’s art-based comics that sometimes lacked strong storylines, the Ultraverse was built by a group of writers—Mike W. Barr, Steve Englehart, Steve Gerber, James D. Hudnall, Gerard Jones, James Robinson, Len Strazewski, and famed science fiction writer Larry Niven—who worked out how all their concepts and “Ultra” characters would fit together as a seamless whole. The line debuted in June 1993 with Prime, Hardcase, and The Strangers. Malibu put posters in city bus stops, and advertised on television, both marketing elements which had never been done in the comics world.

Biggest amongst the Ultraverse heroes (in terms of both size and sales) is Prime. Costumed in red and gold, and with hugely muscled arms, Prime is reminiscent of Captain Marvel. The superstrong adult hero is really teenager Kevin Green, whose Ultra-body often becomes unstable and melts into protoplasmic glop. Prime eventually gains a sidekick known as Turbo Charge, an African American gay teen, and battles villains such as Primevil, Doctor Vincent Gross, MaxiMan, and the Aladdin organization. Prime was translated for video games, and optioned as a feature film by Universal, with scripts having been written by Doug Chamberlin, Chris Webb, Don Calame, and Chris Conroy.

Hardcase is an actor who gained Ultra-powers. Fighting crime for a while with three other Ultras in a group known as the Squad, Hardcase decides to retire when the other Squad members are killed or made comatose by the robotic NM-E. He plays a hero in the movies, but eventually Hardcase decides to become a hero again in real life. Villains he faces include Rex Mundi, Dirt Devil, and Hardwire.

The Strangers are a group of heroes whose origin is an accident that affects each of them. When a San Francisco cable car is struck by a blast from outer space (known as “the Jumpstart effect”), the people on it gain Ultra-powers. Seven of them join together as the Strangers, including target-hitting heroine Lady Killer, African American teen speedster Zip-Zap, transforming hero Atom Bomb, shrapnel-shooting hero Grenade, alien woman Yrial, electrical-powered heroine Electrocute, and light-powered gay hero Spectral. One of the others affected by the cable car accident is Johnny Domino, who would develop the ability to “hear” evil thoughts from others, and soon gained his own series, The Night Man.

Other heroes soon followed with their own books. Mantra featured the adventures of a male sorcerer reincarnated into the body of a modern single mother. Freex followed the adventures of a group of underground teenage Ultras who felt disenfranchised from humanity. Prototype saw a young video game player taking over the super-armor of a corporate Ultra hero. Firearm showcased a tough guy with an uncanny shooting ability; in addition to his own comic, he was featured in a Malibu-produced, thirty-minute, live-action video adventure.

At its height, the Ultraverse published fifteen monthly titles, including Exiles, Firearm, Sludge, Solitaire, The Solution, Warstrike, and Wrath. An ageless, evil vampire named Rune was also given his own series, written and drawn by comics legend Barry Windsor-Smith.

In November 1994, Marvel Comics purchased Malibu and all of its assets, including characters from the Ultraverse, as well as other properties such as Men in Black, and a top-level computer-coloring department. For a brief period, it seemed as if Marvel would keep the Ultraverse a popular property, but the company quickly stumbled. Prices rose dramatically higher, and the comics were taken away from newsstand distribution and placed solely in the direct market of comics specialty shops. Editorial interference with the writers and art teams also led to wavering quality. Although Marvel crossed its own characters over into the Ultraverse—titles included Rune/Silver Surfer (April 1995), Night Man vs. Wolverine (August 1995), and Avengers/Ultra-Force (October 1995)—the line began to hemorrhage both sales and fans.

One of Malibu/Marvel’s most popular titles was UltraForce, a series drawn by fan favorite George Pérez. UltraForce teamed up many popular Ultras, including Prime, Hardcase, and Prototype, with newer heroes Topaz, Ghoul, and Contrary. In October 1995, DIC produced thirteen episodes of a syndicated UltraForce animated series, with strong ratings. A Galoob UltraForce toy line also premiered. Once the Malibu/Marvel merger was complete, however, even deals that were in place prior to it were in danger. Both the series and toys were killed due to internal politics.

As the Marvel Ultraverse titles continued, the quality slipped further. The creators and original writers were replaced. Characters were also replaced—Mantra changed from a mother to a valley girl—and fans rebelled. In 1996, Marvel made a number of drastic cuts, including canceling a number of books. Prime, Rune, and UltraForce were among the final hold-outs in publication, but each of them died by December 1996. The final Ultraverse publication was Ultraverse: Future Shock (February 1997), a one-shot that attempted to wrap the universe up.

As of early 2004, the last appearance of any Ultraverse hero was NightMan, a live-action syndicated television series from Tribune, that aired forty-four episodes from fall 1997 through 1999 (it is still in syndication in some markets). The Ultraverse is remembered by fans today as an entertaining experiment that could have been big … and almost was. —AM