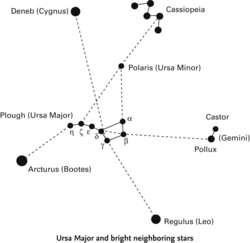 (er -să) (Great Bear) An extensive very conspicuous constellation in the northern hemisphere that can be used to indicate the positions of brighter neighboring stars (see illustration). The seven brightest stars form the Plough. Among these, the three brightest stars are Alioth, Alcaid, and Dubhe, all about magnitude 1.8. The area contains several double stars including the naked-eye double Mizar and Alcor, the planetary Owl nebula, and the close spiral galaxies M81 (NGC 3031) and M82 (NGC 3034). M82 is a starburst galaxy. Abbrev.: UMa; genitive form: Ursae Majoris; approx. position: RA 11.5h, dec +55°; area: 1280 sq deg.
Collins Dictionary of Astronomy © Market House Books Ltd, 2006
The following article is from The Great Soviet Encyclopedia (1979). It might be outdated or ideologically biased.

(or Big Bear), a constellation in the northern hemisphere.. Seven stars of Ursa Major form a figure resembling a dipper with a handle. The two brightest stars, Alioth and Dubhe, have a brightness of 1.8 of the visual stellar magnitude. The North Star can be found along the line drawn through the two outer stars. Visibility is best in March and April. Ursa Major can be seen everywhere in the USSR.