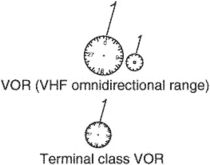 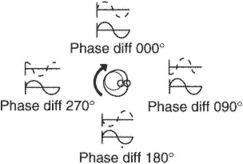 or the code may be removed. In the system, the ground station transmits two signals simultaneously but with a phase difference, as with a bearing of the beacon from the aircraft. There is no phase difference when the aircraft is directly north of the transmitting station; the signals are 90° out of phase when the aircraft is due east of the transmitting station and 180° and 270° when the aircraft is directly south and west, respectively, of the transmitting station. Stations are aligned with magnetic north, except when located in high latitudes, where they are aligned with true north. The system is used for both en route navigation and as a terminal approach aid. On aeronautical charts, the availability of VORs and terminal VORs is indicated as shown in the illustration.
An Illustrated Dictionary of Aviation Copyright © 2005 by The McGraw-Hill Companies, Inc. All rights reserved

Feedback
Flashcards & Bookmarks ?
Please log in or register to use Flashcards and Bookmarks. You can also log in with
Flashcards ?
My bookmarks ?
+ Add current page to bookmarks
Mentioned in ?
References in periodicals archive ?
Vor's eHSCs are designed to generate healthy, fully functional cells with specific advantageous modifications, for example to protect the blood and bone marrow from the toxic effects of antigen-targeted therapies, protecting healthy cells from depletion but leaving tumor cells vulnerable.
Vor Biopharma Names Ang as President and Chief Executive Officer
Select 10 degrees in the direction of the VOR to give yourself a target heading for this small heading change.
Three IFR Curveballs: If it's fair game on your instrument check ride, it's fair game for an ATC clearance. Are you ready?
Independent samples t-test was performed for the comparison of VOR gain and GA values between the BPPV and control groups.
Analyses with the Video Head Impulse Test During the Canalith Repositioning Maneuver in Patients with Isolated Posterior Semicircular Canal Benign Paroxysmal Positional Vertigo
The VOR gain calculated based on the head and eye movements can be defined based on velocity, acceleration, or position.
A Development of Clinical Decision Support System for Video Head Impulse Test Based on Fuzzy Inference System
VOR gain=Eye movement velocity/Head movement velocity.
Influence of Time and Direction Information on Video Head Impulse Gains
On the Dutch Team AkzoNobel, 37-year-old Queensland steerer/trimmer Luke Molloy is gearing up for his second VOR. Based in the UK, his first was in 2005-06 aboard speed record-breaking ABNAMROII, which led to his being invited to join the Swedish 32nd America's Cup challenger, Victory Challenge in 2007.
Driving ambition: This edition of the Volvo Ocean Race has snuck up on us, writes Di Pearson. With the first qualifying full-fleet races in the UK at the start of August, Aussies are predicted to be on every boat
A generally accepted definition of VoR has not yet emerged; however, Davis and Lukomnik define it as "how quickly one goes from the onset of the risk to the impact of the risk." They use the Lehman Brothers' sudden bankruptcy as an example: "In contrast, liquidity risk manifests quickly.
Managing risk at the speed of change: a new risk vocabulary and a call to the profession
VOR promises to empower individuals with developmental disabilities to make and protect quality of life choices.
Speaking out in support of sheltered workshops
Late last year the VoR made arrangements to reacquire the van.
Railway van home 75 years later
Vor said she putting her kids to sleep in her village in India's remote northeast when she heard the gunfire.
Survivors huddle after violence in India kills 72
A unique 400sqm eISkyline StageeIU has been built off Abu DhabieIUs Corniche Breakwater in preparation of the concerts of the Volvo Ocean Race (VOR) Stopover.
Mega stage built off CapitaleIUs Corniche for Volvo Ocean Race