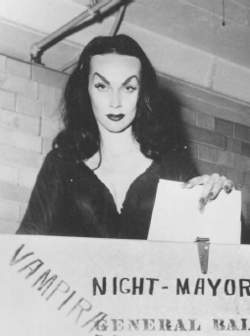 Vampira is the persona of actress Maila Nurmi (1921–2008). The character was created in 1954 when Nurmi was a horror show hostess at KABC-TV in Los Angeles. After a two-year run she moved to KHJ-TV. Nurmi’s enduring fame came from her joining Bela Lugosi in the classic cult movie Plan 9 from Outer Space (1956). They played the initial two vampire/zombies that the space invaders hoped to create in their plan to take over Earth. After the run of her television show, she also appeared in several other movies, including two vampire films, The Magic Sword (1964) and Orgy of the Night (1966), the latter put together by Plan 9‘s director Edward Wood, Jr. Nurmi also appeared in several other nonvampire movies, and for a while she operated a boutique in Hollywood. In the 1980s Nurmi sued Cassandra Peterson for stealing her Vampira persona to create the persona Elvira; however, the suit came to nought. In 2006, Kevin Sean Michaels put out a DVD documentary of Nurmi’s life, Vampira the Movie.