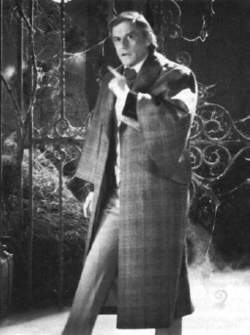 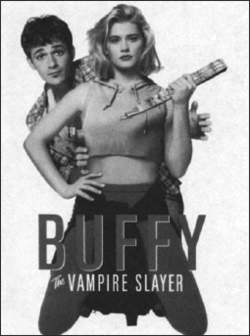 Poster art from the movie version of Buffy the Vampire Slayer. Buffy was a modern version of the vampire hunter.

In most societies that have believed in vampirism, the process of detecting and destroying the vampire has often been carried out by an informal group of people threatened by the presence of vampires in their community, but it occasionally has been placed in the hands of a specialized vampire hunter. Several cultures, especially those in the southern Balkans, assigned specific people the task of hunting and destroying vampires. Most famous of the vampire hunters was the dhampir, who was believed to be the physical son of a vampire and who lived and worked among the Gypsies and the southern Slavs. The Gypsies thought of the vampire (as male) as a very sexy creature who often returned to his spouse/lover and engaged in intercourse. His still potent seed occasionally led to a pregnancy notable for its beginning weeks after the death of the mother’s husband. The male progeny of a vampire, the dhampir, was believed to have peculiar powers in seeing the oft-invisible vampire and destroying it.

A person identified as a dhampir could become a professional or semiprofessional vampire hunter and charge a village for his services. According to surviving accounts, the dhampir began his work in a village by telling those who hired him that there was a bad smell in the air. He would then appear to attempt to locate its source. He might, for example, take off his shirt and look through the sleeve as if looking through a telescope. He would describe the shape that the invisible vampire had taken. Once he located the vampire, he might engage it in a dramatic hand-to-hand fight or simply shoot it. Once killed, the vampire smelled even more and might leave a pool of blood on the ground. Sometimes it could not be killed, in which case the dhampir would attempt to run it off to another village. Among the more notable dhampirs was one named Murat, who operated in the 1950s in the Kosovo-Metohija area of Serbia.

In Bulgaria the vampire hunters were called vampirdzhija or djadadjii. They tended to operate in a more traditional fashion. Their main task seemed to have been to locate the particular grave that held the resting vampire’s body. In this task they used an icon, a holy picture in the Eastern Orthodox tradition. After locating the vampire, the villagers would impale it or burn the body.

The Vampire Hunter in Literature: In literature the “professional” vampire hunter assumed his place as the archenemy of the literary vampire in Bram Stoker‘s Dracula (1897). Dr. Abraham Van Helsing, the real hero of the novel, emerged as the bearer of knowledge about the mysterious threat that has invaded Western civilization and heralded the means of destroying it. In the novel it was his task to organize the cadre of men who together tracked Dracula to his lair and finally destroyed him. When Hamilton Deane brought Dracula to the stage, he chose the part of Van Helsing for himself as preferable to that of the title character, which went to Raymond Huntley. Deane continued to portray Van Helsing for many years as his company toured England. When the play arrived on Broadway, one of the more memorable Van Helsings stepped into the role.

Edward Van Sloan brought the image of a quiet physician capable of offering a calming bedside manner to the role. He went on to play the part in the 1931 movie with costar Bela Lugosi. In the original version of the film, Van Helsing (Van Sloan) makes the closing speech that followed the last act of the play, stepping out to remind the audience prior to their departure that such things as vampires did exist. This speech was cut from later releases of the film because Universal Pictures thought it would be taken too seriously by religious groups. Van Sloan also assumed the Van Helsing role in the sequel, Dracula’s Daughter, in which he was accused of murdering Dracula. At the same time that Dracula was filmed, a Spanish version was also shot, with Eduardo Arozamena taking the role of Van Helsing.

After Edward Van Sloan, no one again was really identified with the hunter-killer role until it was taken by Peter Cushing, playing opposite Christopher Lee in the title role, in the Hammer Films production of The Horror of Dracula (1958). A veteran actor of both the stage and screen, Cushing brought to the role the persona of a persistent modern scientist who emitted confidence owing to his knowledge. He returned to the Van Helsing part and portrayed him (and some modern-day descendants) in The Brides of Dracula (1959), Dracula A.D. 1972 (1972), Satanic Rites of Dracula (a.k.a. Count Dracula and His Vampire Bride, 1973), and The Legend of the Seven Golden Vampires (1974), all for Hammer. He played the actual Van Helsing in five films, and transferred his Van Helsing persona to other parts in which he portrayed the intellectual-scientific man of knowledge.

No one since has had the commanding presence that Cushing brought to the role. However, several outstanding actors have taken up the challenge and offered commendable portrayals, including Sir Laurence Olivier, who tracked Frank Langella in Dracula (1979), and, most recently, Anthony Hopkins, who tracked Gary Oldman in Bram Stoker’s Dracula (1992).

In 1974, German actor Horst Janson became the first person to portray a vampire hunter in a film featuring the hunter and his story over that of the vampire(s) that were the object of the hunt. Captain Kronus: Vampire Hunter was also a Hammer production. The vampire hunter never really made it as a star, however, until 1992 and the first appearance of Buffy the Vampire Slayer. The original Buffy, though, met with mixed reviews, went on to become one of the twenty-five top grossing vampire films of all time and set the stage for the return of Buffy as a television series in 1998. Buffy Summers, more than any other character, established the vampire hunter as a literary character with great potential worthy of further exploration. Buffy would, of course, lead a team of vampire hunters, one of whom, the good-guy vampire Angel, would emerge as a separate vampire hunter with his own team.

Almost simultaneously with the success of Buffy, Blade the Vampire Slayer, a Marvel Comics character created by Marv Wolfman in the 1970s, reached superstar status with his portrayal on the screen by Wesley Snipes. Snipes made three Blade movies in 1998, 2002, and 2004, in which he portrayed a half human, half vampire who dedicated himself to slaying the vampires who had become integrated into human society. All three movies have moved into the top ten grossing vampire movies. Just as the third Blade movie came out, Hugh Jackman would lead a crusade against Dracula in Van Helsing that went on the become a popular vampire movie as well.

Other movies that also lifted up the vampire hunter to the starring role, all made since the late 1990s, were John Carpenter’s Vampires (1998); Bloodrayne (2006), and the Japanese anime film, Blood Hunter D (2001). A variety of Japanese anime, deriving from juvenile television shows, featured the hunter over the vampire, though often, the hunter was, like Hellsing, partly a vampire himself.

Possibly the most notable vampire hunter in literature has been Anita Blake, the main character in the series of novels by Laurell Hamilton. Anita made her first appearance in the novel Guilty Pleasures (1993), in which her profession is described as that of a re-animator. She uses magical power to bring the dead back to life, at least long enough to question them for legal purposes, but she is also a licensed vampire hunter who eventually becomes a Federal Marshal. As the novels progress (there were seventeen by 2009), Anita eventually became a werewolf and shapeshifter.

Popular Culture: The popularity of the vampire has led to the production of various tools which have been presented, more or less, as aids to fighting them. On several occasions, vampire hunter’s kits have shown up at auctions, claiming some antique status as items produced in an earlier age by people who really felt vampires were real. In recent years, there have been a spectrum of manuals for vampire hunters, some obviously works of fictions, but others such as that of British vampire hunter Sean Manchester, meant to be taken quite seriously.

Feedback
Flashcards & Bookmarks ?
Please log in or register to use Flashcards and Bookmarks. You can also log in with
Flashcards ?
My bookmarks ?
+ Add current page to bookmarks
Mentioned in ?
References in periodicals archive ?
The one-minute-and-twenty-seven second teaser didn't mention any names, but it's safe to assume that the whip-wielding gentleman is a member of the Belmont clan of legendary vampire hunters. A voice-over also helps to confirm this with the statement: 'The one who killed Dracula.'
WATCH: Netflix Castlevania animated series teaser streamed
Vanessa ((https://twitter.com/iamkellyoverton?ref_src=twsrc%5Egoogle%7Ctwcamp%5Eserp%7Ctwgr%5Eauthor) Kelly Overton ), a mysterious dead woman who comes from a long line of vampire hunters, is resurrected.
'Van Helsing' Premieres Two Episodes Back-To-Back On Syfy
Available now MERSEY vampire hunters maybe intrigued by this new book aiming to uncover Britain's association with the undead, which follows the success of recent vampire tales from Twilight to True Blood.
Review
"I felt we could have great fun with a spoof about Dracula being a bit past his best and, being pursued by vampire hunters, takes refuge at the Whitby Goth Weekend.
Classic horror's comic re-vamp; Tonight, we'll get first bite at a new play that is destined for next year's Whitby Goth Weekend, as a comedy spin on Dracula makes its debut. BARBARA HODGSON reports
She joins forces with several erstwhile vampire hunters and a were-unicorn, and finds herself at a defining crossroads as the feast of the vampire king approaches.
Durst, Sarah Beth. Drink, Slay, Love
In the first of a new series Will Hill introduces us to Department 19, a secret government agency of vampire hunters in which sixteen year old Jamie Carpenter--because of his lineage--finds himself entangled.
Hill, Will: Department 19
As we entered the building and the steel shutters clanked to an unnerving close behind us, we found ourselves plunged into the world of vampire hunters.
Theatre thriller with extra bite; Plunged into the world of vampire hunters
Titled Dracula: The Un-Dead, the new book also features the original novel's character Abraham van Helsing and his fellow vampire hunters. Stoker, who is the great-grand-nephew of Bram Stoker, researched his ancestor's original notes from 111 years ago to bring back the original story lines for a follow-up novel, which has been fully authorised by the Stoker family.
Dracula to be resurrected in new book
Richard finds himself fighting for his very existence when he is targeted by a militaristic team of vampire hunters called the S.T.A.K.E.
Revamped
Mathias is Prime of his vampire family and sworn to protect his people--but he finds himself falling in love with a lovely police officer from the past, and when a band of vampire hunters threatens them, Matt finds a hidden danger underlying his romance and longing for love.
Pocket Books
It's the third in the Blade series and the titular hero joins two other vampire hunters to form a formidable fighting force.
Film: SILLY SEQUEL FAILS TO CUT IT AS HORROR; BLADE: TRINITY (15)
Nosferatu (1922) is a must-see for all vampire hunters - and stoned students.
FILM: HAVING A QUICK BITE; MANY ACTORS HAVE GOT THEIR TEETH INTO THE CLASSIC ROLE OF COUNT DRACULA