Nonvariational principles of mechanics directly establish the laws of motion performed by a system under the influence of the forces applied to it. Among these principles are Newton’s second law, according to which, in the motion of any point of a system, the product of its mass and its acceleration is equal to the sum of all the forces applied to it, and d’Alembert’s principle. The nonvariational principles hold true for any mechanical system and have a comparatively simple mathematical form. However, their application is limited only by the framework of mechanics, since such a purely mechanical concept as force enters into the expression of these principles. The following is also significant. In most mechanics problems, the motion of constrained systems, that is, systems whose motions are restricted by constraints, is considered. Examples of such systems are all kinds of machines and mechanisms, as well as land transport, where the constraints are bearings, hinges, cables, and the like and for land transport, road beds or rails as well. In order to study the motion of a system under constraint starting from nonvariational principles, it is necessary to replace the effect of the constraints by some force, called reaction (or also constraint). However, the magnitudes of these reactions are not known beforehand, since they depend on the magnitude and the point of application of the given (active) forces applied to the system—for example, the forces of gravity, elasticity of springs, thrust, and others—and likewise how the system itself moves under these conditions. Consequently, additional unknown quantities in the form of reactions are included in the constructed equations of motion, which usually considerably complicates the whole solution process.

The advantage of variational principles of mechanics is that equations of motion of the corresponding mechanical system that does not contain unknown reactions can be obtained directly from them. This is achieved because the effect of the constraints is accounted for not by their replacement by unknown forces (reactions) but by consideration of those motions or displacements (or velocity and acceleration increments) that the points of this system can have under the given constraints. For example, it point M moves along a given smooth (ideal) surface, which is a constraint for it (Figure 1), then the action of this constraint can be accounted for by replacing the constraint beforehand by a reaction N of previously unknown value, which is directed at any moment of time along the normal Mn toward the surface (since along this direction the constraint does not allow the point to move). But the effect of this same constraint can be accounted for by establishing that for a point in the given case at any position, only elementary displacements perpendicular to the normal Mn (Figure 2) are possible; such displacements are called virtual displacements. Finally, the effect of this same constraint can also be characterized by the fact that in this situation, the point’s motion from a certain position A to position B is possible only along a curve that lies on a surface that is a constraint (Figure 3); such motions are said to be kinematically realizable. 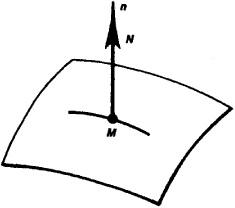 The substance of the variational principles of mechanics is that they establish characteristics (indications) that make it possible to distinguish the true motion of a mechanical system, that is, motion actually occurring under the influence of specified forces, from one or another of its kinematically realizable motions (or the system’s equilibrium state from its other possible states). Usually, these characteristics (indications) consist of the fact that for a true motion some physical quantity that depends on the system’s characteristics has the smallest value in comparison with its 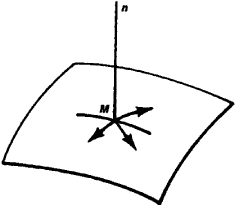 Among the integral variational principles of mechanics are the principles of least (stationary) action. According to these principles the true motion, among those kinematically possible motions of a system between two of its positions, is the one for which the physical quantity, called the action, has a minimum value. Different forms of these variational principles are characterized by the choice of the quantity of action and by the special features of the kinematically possible motions being compared.

The variational principles of mechanics are used both to construct the equations of motion of a mechanical system in the simplest form and to study the general properties of these motions. In the corresponding generalization of concepts, they are also used in continuum mechanics, thermodynamics, electrodynamics, quantum mechanics, relativity theory, and other fields.