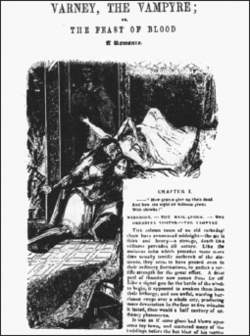 The first page from the novel Varney the Vampyre. 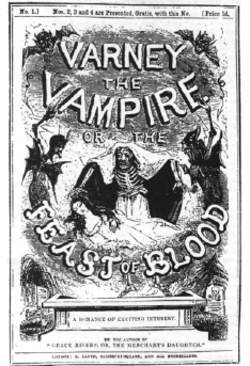 The cover from an early edition of Varney the Vampyre, the first English-language vampire novel.

One of the most famous vampires in literature is Sir Francis Varney, the title character in Varney the Vampyre: or, The Feast of Blood, a nineteenth-century British novel written by James Malcolm Rymer. The story originally appeared in 109 weekly installments in the mid-1840s. The entire manuscript was then collected and printed as a single volume of over 800 pages. It was the first vampire novel in English, and the first vampire fiction since the original short story by John Polidori and the stage dramas that his story inspired. The story thus served as an important transitional piece between the original written accounts of vampires in the early nineteenth century and the writing of Sheridan Le Fanu and Bram Stoker.

Through the twentieth century, Varney had a checkered career. Copies of Rymer’s poorly written novel were seldom saved, so it became a rare book. Although different authors made reference to it, few had seen a copy and fewer still had taken the time to work their way through it. The book was published anonymously, and it was only in the 1970s that its true authorship was established. It was unavailable for many decades, but two reprints were published in 1970 and 1972. The audience was quite limited and the book has remained out-of-print since. The story of Varney opened with his attack upon the young Flora Bannerworth. Having entered her bedroom, he sank his fangs into her neck and began to suck the gushing blood. The first half of the book followed his increasingly complex relationship with the Bannerworth family and their close friends and associates. Varney possessed white skin (as if bloodless), long, fang-like teeth, long fingernails, and shining, metallic eyes. Immediately after feasting, his skin took on a reddish hue.

Varney’s initial attack had left two puncture marks in Flora’s neck. Interrupted by members of the family during his repast, Varney was shot but nevertheless escaped. Henry Bannerworth quickly concluded that Flora had been attacked by a “vampyre.” From a book he had read in Norway, he noted that vampyres attempted to drink blood to revive their body. In addition, they tended to do their feeding on evenings just prior to a full moon so that, should they meet with any physical problem, they could revive themselves by basking in the rays of the full moon. And it was in this manner that Varney had revived from the gunshot wounds he had received. (The importance given to moonlight throughout the novel shows Rymer’s reliance on John Polidori‘s “The Vampyre”.)

While bits and pieces of Varney’s history were recounted throughout the novel, the reader had to wait until the end to get the full story. Varney’s name before he had become a vampire was Mortimer. He originally had been a supporter of the British Crown and was living in London at the time of the beheading of Charles I and the proclamation of the Commonwealth under Cromwell in 1649. During this period he had assisted members of the royalty in escaping to Holland, for which he was handsomely rewarded. In a moment of passion, Mortimer had struck his son, accidentally killing him. The next thing he had remembered was a flash of light and being struck to earth with great force. When he had recovered consciousness, he was lying on the ground next to a recently opened grave. A voice told him that for his deed thenceforth he would be cursed among men and known as Varney the Vampyre. Varney later discovered that he was shot by Cromwell’s men and two years had passed since he lost consciousness. In the meantime, Cromwell had been deposed and the Crown restored. His former house was burned, but the money he had buried under the floor was still there. With it he made a new beginning. He slowly learned the rules of his new nature.

Like Lord Ruthven, the vampire in Polidori’s tale, Varney had great strength, he could walk around freely in the sunlight, and he needed blood only occasionally (not nightly). He could be wounded and even killed but would be revived simply by bathing in the moonlight. First pictured as something entirely evil, Varney later took on a more complex nature and showed himself to be an individual of feelings and honor. So appealing were his virtues that the Bannerworths, once they develop some understanding of his condition and his relationship with one of their ancestors, eventually became his protectors from a mob that set out to destroy him.

Rymer was also familiar with the eastern European vampire cases, probably through Dom Augustin Calmet, who had been published in an English edition in the 1700s. For several chapters, beginning with chapter 44, Varney’s story turned on the action of a mob. An unnamed individual, who had traveled on the Continent, informed the people that the sign of the presence of a vampire was the sudden, mysterious death of people who seem to have wasted away. He warned them that such people would also return as vampires. Armed with this information, the mob, unable to locate Varney, moved on to the local graveyard and attacked the body of one Miles, who had recently died. Their eagerness to kill a vampire was thwarted when Miles’s coffin was found to be empty. After completing his interaction with the Bannerworths, Varney moved on to a series of increasingly brief encounters with various people in what became a very repetitive story line. He would try to establish himself in a new social setting, he would attempt to bite someone, be discovered and hunted, and have to escape. Varney was singularly inept at attacking people (almost always a young woman) and was continually caught by people responding to the cries of his victims.

Varney was condemned by modern critics as poorly written and somewhat chaotic. It was not written as fine literature, or even as a novel, however. It was written in weekly installments over a two-year period, probably by several different authors, in such a way as to keep the readers entertained and coming back for the next installment. It accomplished that rather limited goal in spectacular fashion, becoming one of the most successful of the penny weeklies of the mid-nineteenth century.