a graphical representation of the values of periodically varying quantities and the relationships between them by means of directed line segments called vectors.

Vector diagrams are widely used in electrical engineering, acoustics, optics, and other areas of science. The simple harmonic functions of one period, for example,

can be represented graphically (see Figure 1) as projections on the Oy axis of vectors OA1OA2, and OA3 rotating with constant angular velocity ω, while OA2 and OA3 are turned by the angles α and β with reference to OA1. The length of the vectors corresponds to the amplitude of the oscillation: 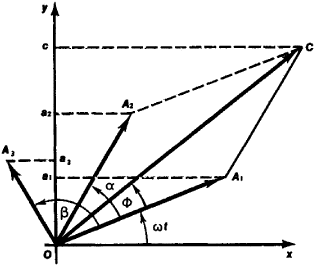 Feedback
Flashcards & Bookmarks ?
Please log in or register to use Flashcards and Bookmarks. You can also log in with
Flashcards ?
My bookmarks ?
+ Add current page to bookmarks
Mentioned in ?
References in periodicals archive ?
Caption: Figure 16: Flow vector diagram when the working face had advanced 80 m.
A Mechanical Model of the Overlying Rock Masses in Undersea Coal Mining and a Stress-Seepage Coupling Numerical Simulation
The vector diagram of these final forces, radiating out in the proper directions from the neutral origin points with a force proportional to the distance from the origin, is shown in Figure 3.
Systematic Synthesis of Advertising Research Verbatims
Caption: Figure 5: The vector diagram when ES is applied to restrain the demand side power fluctuation while noncritical load is resistive-inductive.
Restraining the Demand Side Power Fluctuation of Active Distribution Network Using 0[degrees]/180[degrees] Phase Controlled Electric Spring
The zero vectors include [V.sub.0(000)] and [V.sub.7(111)], which will be corresponding to small vectors of three-level vector diagram. As shown in Figure 4 the whole diagram as a big hexagon is divided into 6 areas marked with S = n (n = 1, 2, 3, 4, 5, and 6), and S is the center of each corresponding small hexagon, which transforms the three-level voltage space vectors into two-level ones.
Thermal Equilibrium Dynamic Control Based on DPWM Dual-Mode Modulation of High Power NPC Three-Level Inverter
Caption: Figure 9: Decomposed two-level space vector diagram.
A Novel Hybrid T-Type Three-Level Inverter Based on SVPWM for PV Application
Caption: FIGURE 9: Velocity vector diagram of a runner in the x-y plane and at the outlet when the degree of the relative opening of the cylindrical valve is 0.9.
Numerical Research on Flow Characteristics around a Hydraulic Turbine Runner at Small Opening of Cylindrical Valve
The vector diagram of formed asymmetrical current system and obtained as results of computation other electromagnetic quantities calculation is presented below.
The numerical-field analysis of the magnetic field and the electrical quantities in the turbogenerator stator under autonomous unbalanced loading
Vector diagram of primary and secondary windings' current and voltage of electric power line with lagging current over voltage, is shown in Fig.
Investigation of energy commercial metering set's elements errors/Elektros energijos apskaitos komplekso elementu paklaidu tyrimas
To illustrate this effect in another way, the impact of insertion loss is shown in Figure 3 using a vector diagram of Equation 2 in which one plot assumes no loss (L = 1) and the other plot includes the effect of adding insertion loss.
New capabilities for enhancing mm-wave network measurements
Vector diagram corresponding the load mode of the TG
Determination of electromagnetic parameters and phase relations in turbo-generators by the automated calculation of the magnetic field in the software environment FEMM
A vector diagram will show what is occurring during transitions.
Spectrum vs. modulation analysis: both are needed
The phase non-linearity due to adjacent channel recombination is calculated from the vector diagram of Figure 11, where the adjacent channel interference signal voltage is shown as a small vector (A2) rotating about the head of the in-band channel signal voltage (A1).
Adjacent channel recombination in analog repeaters