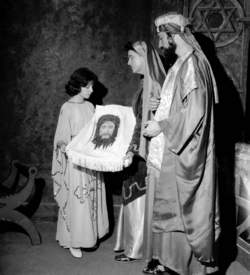 In this 1955 photo of a reenactment, a child holds Veronica’s Veil, which reveals Christ’s image that was imprinted on the cloth when a woman kindly wiped Jesus’ face before His crucifixion. Getty Images.

According to a story included in the sixth-century apocryphal book the Acts of Pilate, as Christ was carrying the cross to his crucifixion a woman showed kindness to Him by wiping His face with a veil. As a result, an image of His face was impressed upon the cloth, much as it is on the shroud of turin. Centuries later the woman came to be known as Veronica, a name that appears to derive from the Greek term “vera icona,” or “true icon.”

The story of Veronica and the veil entered into popular culture, and in 1300, on the occasion of the proclamation of the Holy Year, the reputed veil was placed on display in Rome and joined the list of the wonders of the city to be seen by pilgrims. Over the next centuries a variety of accounts were written about the veil. They reported that is was made of fine material and that the image was on both sides of the veil. In the image, Christ’s eyes are open, and there is evidence of blood spots on His face.

A problem with the history of the veil arises during the reign of Pope Paul V (r. 1605–1621). In 1608, the chapel in Saint Peter’s Basilica, where the veil was kept, was demolished as part of an extensive renovation. According to historical accounts, the veil was eventually placed inside a statue of Veronica that stands beside the main altar in Saint Peter’s. Apart from this official history, however, several European churches claim to house the true veil. An interesting twist to the story was put forth in the summer of 2001 by Heinrich Pfeiffer, a professor of Christian art history at the Pontifical Gregorian University in Rome and an official advisor to the Papal Commission for the Cultural Heritage of the Church. Pfeiffer claimed that the veil that had been displayed for so many years in Rome had actually been stolen in 1608. Afterwards, it had found its way to the Sanctuary of the Sacred Face, a Capuchin friary in Manoppello about 150 miles from Rome.

The Manoppello cloth is approximately 6.5 by 9.5 inches and is kept in a silver ostensory. The cloth is quite thin, almost transparent. On it there is an image of a man with his eyes open and bearing signs of suffering, such as bruises, cuts, and blood on the face. According to one mid-seventeenth century account, the cloth at Manoppello came into the hands of a woman named Marzia Leonelli, who sold it to Donato Antonio de Fabritiis, who then donated it to the friary. Pfeiffer cited a variety of evidence that the veil had disappeared from Rome, including the actionof Urban VIII (r. 1623–1644), who both prohibited further reproductions of Veronica’s Veil and ordered the destruction of all existing copies.

Quite apart from Pfeiffer’s work, the veil at Manoppello has been the subject of observations by scholars and scientists. Optical tests by Donato Vittori, a professor at the University of Bari, pointed to the unusual nature of the image on the cloth, and subsequent tests have compared it to the Shroud of Turin. Many questions remain concerning both the object in Saint Peter’s, which is not available for observation, and the veil at Manoppello. As answers to these questions are sought, both are venerated by devout Roman Catholics.

Feedback
Flashcards & Bookmarks ?
Please log in or register to use Flashcards and Bookmarks. You can also log in with
Flashcards ?
My bookmarks ?
+ Add current page to bookmarks
Mentioned in ?
References in periodicals archive ?
"And the Virgin, Heaven's Queen, for whom my love Forever bums, will offer grace, For I am Bernard, her faithful worshipper." Like some pilgrim coming from as far Away as Croatia, to see the holy image Of our Lord's sweaty face, but cannot believe it, But says to himself for as long as they let him look: "Jesus Christ, my Lord, and one and only God, could this be truly how you looked?" (Dante, 2010) The footnotes for these lines refer to Veronica's veil: the pilgrim contemplates Saint Bernard in the same way that a pilgrim would contemplate the veil of Veronica (Ibid).
The legend of Jesus and Veronica
describes well how Julian learned to read and write and shows how some of her language reflects the language of the Norwich Corpus Christi plays, especially a text about Veronica's veil. Perhaps, R.
Julian's Gospel: Illuminating the Life and Revelations of Julian of Norwich
One keeps a barely discernible shred of Veronica's veil in a tiny glass case.
The things we keep: the poet says love calls us to the things of this world for a second finding
The poem opens with an image depicting the face of Christ imprinted on Veronica's veil (Figure 2).
Private reading and the rolls of the Symbols of the Passion
FAN DEATH Veronica's Veil The exotic duo re-release their single which was first released in October 2008.
7 TUNES; PICK OF THE WEEK
Wherever we look in the panels we see passages of virtuoso painting, none more so than the depiction of St Veronica's veil. The artist's portrayal of Christ's miraculous portrait on the diaphanous material that Veronica holds in front of her luxuriant red robe is no less inexplicable.
Transcendental reality: cutting-edge scholarship and great works of art make 'The Master of Flemalle and Rogier van der Weyden' unmissable
She points to Vigri's illuminated miniatures of Christ that bear striking formal similarities to the Veronica's veil "portrait," believed by the faithful to record the imprint of Christ's face prior to his crucifixion.
Italian Women Artists from Renaissance to Baroque
For example, a 25-foot-by-13-foot portrayal of "Veronica's Veil" has been placed in the traditional spot above the altar, and prophets decorate the area.
Church receiving a million-dollar makeover
The second, embodied by an impressive selection of paintings, is the influence of two iconic types: the frontal, disembodied head of Christ associated with Veronica's veil, and the image of Virgin and Child of the type known as "the compassionate one" or "tender kissing" A third, closely related notion concerns permutations of the motif of Saint Luke painting the Virgin; some of the most influential Byzantine icons brought to the West were believed to be the work of Saint Luke, patron saint of painters.
Byzantium at the Metropolitan
Veronica's veil of hair is of course the most enduring image of her, the image from which any account of her stardom inevitably proceeds.
LAKE EFFECTS
Pfeiffer's book helps to reveal "the mystery of Veronica's veil," said Cardinal Fiorenzo Angelini, president of the International Research Institute on the Face of Christ.
BBC Son of God series faces criticism
Chapter 7 details the popularity of images of Veronica's veil. With Veronica's sudarium inaccessible in Rome, quite varied representations of it, each claiming its own veracity, circulated widely.
The Visual and the Visionary: Art and Female Spirituality in Late Medieval Germany