[‚ver·ē′äm·əd·ər]
(electromagnetism)
A variable inductance having two coils in series, one mounted inside the other, with provisions for rotating the inner coil in order to vary the total inductance of the unit over a wide range.
(engineering)
A geomagnetic device for detecting and indicating changes in one of the components of the terrestrial magnetic field vector, usually magnetic declination, the horizontal intensity component, or the vertical intensity component.
McGraw-Hill Dictionary of Scientific & Technical Terms, 6E, Copyright © 2003 by The McGraw-Hill Companies, Inc.
The following article is from The Great Soviet Encyclopedia (1979). It might be outdated or ideologically biased.

in radio engineering, a variable-inductance coil designed for tuning oscillatory circuits. The type of variometer used in the 1920’s and 1930’s was divided into two sections connected in series: a fixed outer coil (the stator) and a movable inner coil (the rotor). The inductance of the variometer is equal to the sum of the inductances of the sections and the mutual inductance between them, which changes significantly when the rotor is turned 180°. This type of variometer was widely used to retune the frequency of the oscillatory circuit of a radio receiver. The variometer subsequently lost its original form and use and is now used in radio receivers as an inductance coil containing within its winding a core made of a magnetic dielectric that changes the induction within insignificant limits in order to adjust the frequency of the oscillatory circuit. 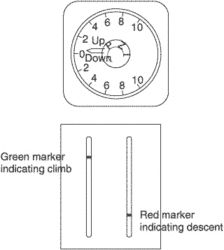 Two types of variometer.
An instrument that is a sensitive rate of climb and descent indicator. Used in sailplanes and gliders, it indicates climb and descent almost instantaneously, unlike conventional vertical speed indicators, which suffer from lag.
An Illustrated Dictionary of Aviation Copyright © 2005 by The McGraw-Hill Companies, Inc. All rights reserved