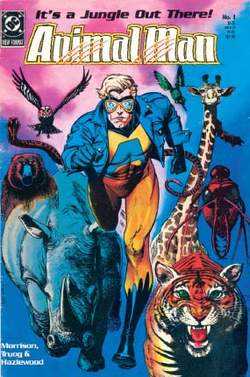 We’ve been called horror, mature, sophisticated, dark fantasy,cutting-edge, and just plain weird,” editor Karen Berger said in Vertigo Preview (1992). “Tired of tired misnomers, and not even having a collective name, we decided to define ourselves.” The name chosen for DC Comics’ imprint of off-kilter books was Vertigo, and its publications were christened a “bold new line of comics for mature readers.”

The genesis of Vertigo began in the 1980s, when writer Alan Moore revitalized DC swamp monster/sometime-superhero book Saga of the Swamp Thing, beginning with issue #20 (January 1984). Moore’s take on the story existed in a darker corner of the DC universe, where monsters and shadows were far more horrifying than any supervillain attack. Although Swamp Thing interacted occasionally with DC heroes such as the Justice League, Superman, and Batman, the sentient plant was eventually revealed to be an “Earth elemental,” whose powers were akin to a force of nature. With the success of Swamp Thing, other avant garde, dark, and revisionist takes on DC heroes were soon put into motion, including Animal Man, Sandman, Black Orchid, Doom Patrol, and Shade the Changing Man. Like Moore, the writers for all of the series came from the British Isles (though Vertigo would eventually employ American writers as well).

Animal Man (1988–1995) starred a nearly forgotten 1960s hero who could take on the powers of animals around him. Reinvented by writer Grant Morrison, family man Buddy Baker attempts to revive his superhero career, discovering that his connection to animals runs deeper than he had previously thought, thanks to his alien-initiated link to a “morphogenic field” generated by all living things. By the end of Morrison’s run, with issues #25-#26 (July-August 1990), Baker even realized that he was a comic book character. Future issues continued the exploration of Baker’s connection to nature, as well as animal rights issues, suicide, and religion. Animal Man became a Vertigo title with issue #57 (March 1993).

Sandman (1989–1996) was the redefinition of a 1942 hero, previously redefined by Joe Simon and Jack Kirby for Adventure Comics, who had also enjoyed adventures with the Justice Society of America. Revived (in name only) in 1974, the older hero became more of a superheroic guardian of dreams for a short-lived series. When writer Neil Gaiman reinvented Sandman in 1989, for another series, he was now Morpheus, the Lord of Dreams, and one of seven supernatural beings called the Endless. Though a few stories touched base with the DC superhero universe— even explaining Morpheus’ connection to the previous Sandmans of comic book history—most of the stories were dark fantasy, myths, and fairy tales, set in many different time periods with ever-changing casts. Sandman became a Vertigo series with issue #47 (March 1993), and soon became one of the most prestigious titles in DC’s publishing history, winning Gaiman accolades for his writing, including a World Fantasy Award.

Black Orchid (1993–1995) was the most forgotten of the Vertigo characters when she was revived. Debuting in Adventure Comics #428 (August 1973), she was a superstrong flying woman whose identity and origin remained a mystery. Neil Gaiman revived her in 1988, for a miniseries painted by Dave McKean, in which her origins were revealed, and Batman guest-starred. A short-lived Vertigo series debuted in September 1993, and lasted until June 1995.

Doom Patrol (1987–1995) was initially the most famous of the Vertigo-to-be titles, based as it was on a 1963 superhero team of adventurers. The series was revived in 1987, with a partially new cast of super-characters, but with issue #19 (February 1989), writer Grant Morrison arrived to make things more unusual. The Doom Patrol had been called comics’ strangest heroes, and Morrison upped that ante, turning Negative Man into the hermaphroditic Rebis, and adding in multiple-personality heroine Crazy Jane, monkey-faced girl Dorothy Spinner (who could bring things from her imagination to life), and Danny the Street, a sentient, transvestite street that could teleport. Morrison’s run included villains such as the Scissor Men, the Brotherhood of Dada, and the anagram-speaking men from N.O.W.H.E.R.E. Morrison left with Doom Patrol #63 (January 1993), and new writer Rachel Pollack took over with the first Vertigo issue, #64 (March 1993), continuing Morrison’s surrealistic tone.

Shade the Changing Man (1990–1996) was a strange Steve Ditko-created concept from 1977, in which an other-dimensional alien with an illusion-projecting M-vest was on the run. After eight issues it disappeared, but the concept was revived, in 1990, by writer Peter Milligan. As before, Rac Shade is on the run, and his M-vest (now called a “madness vest”) helps him in his adventures as he traverses America on a strange road trip. Shade inhabits the body of a killer, and his companion on the trip just happens to be the daughter of his victims. The series was surrealistic to begin with, and obsessed with pop culture, and with #33’s switch to Vertigo (March 1993), Shade and friends settled down to live in a hotel that attracted strangeness. Inventive to the end, Shade remained more of an experimental superhero series than a crime-fighting adventure book.

As with Shade and the others, the switch to Vertigo, in fact, almost completely erased the superhero concept from most titles. Sandman Mystery Theatre (1993–1999) told adventures of the 1940s hero but was more pulp adventuring than flashy costumes. Hellblazer (1988-present) was a Swamp Thing spin-off about chain-smoking magician John Constantine and his brushes with the occult; it was released as a 2004 film starring Keanu Reeves in the title role. The Books of Magic (1990-1991 and 1994-2000) detail the adventures of bespectacled British preteen magician-to-be Timothy Hunter (to whom the later Harry Potter bears a striking resemblance); Hunter was mentored by DC occult heroes such as the Phantom Stranger, Mr. E, Constantine, and Dr. Occult. Kid Eternity (1991 and 1993-1994) revived a 1946 Quality Comics adolescent who could summon historic heroes to help him; the series updated him to be a bitter adult whose summonings brought demons instead.

Although Vertigo remains one of DC’s most popular imprints, the stories have become less and less connected to the realm of superheroes as time has passed. To name two of the most talked-about series since the line’s earlier rein-vented-superhero days, psychedelic adventures filled the pages of The Invisibles, while Preacher presented a man who can channel the voice of God, sharing adventures with his girlfriend and a redneck vampire. But two constants have remained since Vertigo’s founding: Many of the writers are British, and all of the books are as off-kilter, as the imprint’s name suggests.

DC Comics became a subsidiary of DC Entertainment, Inc. in 2009, resulting in changes in DC Comics’ leadership. Characters from the DC universe who had come under Vertigo’s control went back to the DC universe line of comics. When DC relaunched its entire line of comics in September 2011, one of its new titles was Justice League Dark #1, featuring a new team of various characters who had appeared in Vertigo series over the previous two decades. They included John Constantine from Hellblazer, Deadman, the precognitive mystic Madame Xanadu, Shade the Changing Man, and the magician Zatanna. The new series was illustrated by Mikel Janin and written by longtime Vertigo author Peter Milligan (who is not British but Irish). This year also saw a new Animal Man series, written by Jeff Lemire, with art by Travel Foreman and Dan Green. —AM & PS