The system that subserves the bodily functions of balance and equilibrium. It accomplishes this by assessing head and body movement and position in space, generating a neural code representing this information, and distributing this code to appropriate sites located throughout the central nervous system. Vestibular function is largely reflex and unconscious in nature. 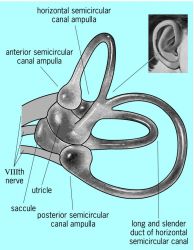 The vestibular labyrinth is located within the inner ear

The centrifugal flow of information begins at sensory hair cells located within the peripheral vestibular labyrinth. These hair cells synapse chemically with primary vestibular afferent nerve fibers, causing them to fire with a frequency code of action potentials that include the parameters of head motion and position. These vestibular afferents, in turn, enter the brain and terminate within the vestibular nuclei and cerebellum. Information carried by the firing patterns of these afferents is combined within these central structures with incoming sensory information from the visual, somatosensory, cognitive, and visceral systems to compute a central representation of head and body position in space. This representation is called the gravito-inortial vector and is an important quantity that the central nervous system employs to achieve balance and equilibrium. See Brain, Nervous system (vertebrate), Postural equilibrium, Reflex

The vestibular labyrinth is housed within the petrous portion of the temporal bone of the skull along with the cochlea, the organ of hearing (Fig. 1). The receptor element or primary motion sensor within the labyrinth is the hair cell (Fig. 2). Hair cells respond to bending of their apical sensory hairs by changing the electrical potential across their cell membranes. These changes are called receptor potentials, and the apical surface of the hair cell thus functions as a mechanical-to-electrical transducer. The frequency of the resulting action potentials in the VIIIth cranial (vestibulocochlear) nerve encodes the parameters of angular and linear motion. See Biopotentials and ionic currents, Ear (vertebrate), Synaptic transmission 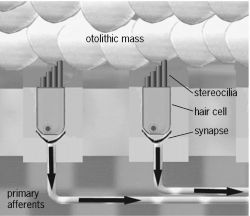 Hair cells are the common sensory element in both the angular and linear labyrinthine sensors as well as within the cochlea. The particular frequency of energy that hair cells sense within these diverse end organs arises because of the accessory structures surrounding the hair cells. Thus, angular motion is sensed by the semicircular canals, linear motion by the otolith organs, and sound energy by the cochlea.

The primary afferents innervated by hair cells are the peripheral processes of bipolar neurons having cell bodies located in Scarpa's ganglion within the internal auditory meatus. The central processes of these cells contact neurons in the brainstem of the central nervous system. The vestibular nuclei complex is defined as the brainstem region where primary afferents from the labyrinth terminate. It is composed of four main nuclei: the superior, medial, lateral, and descending nuclei. The axonal projections of vestibular nuclear neurons travel to all parts of the neuraxis, including the brainstem, cerebellum, spinal cord, and cerebrum. See Motor systems

In all vertebrates, there is an efferent system that originates from cell bodies within the central nervous system and terminates upon labyrinthine hair cells and primary afferents. The efferent vestibular system is presently a subject of intense study but undoubtedly is in place to enhance vestibular function. It is interesting that evolution felt it necessary to modify incoming vestibular information before it could enter the central nervous system.

Feedback
Flashcards & Bookmarks ?
Please log in or register to use Flashcards and Bookmarks. You can also log in with
Flashcards ?
My bookmarks ?
+ Add current page to bookmarks
Mentioned in ?
References in periodicals archive ?
The effects of vestibular system lesions on autonomic regulation: Observations, mechanisms, and clinical implications.
Association between Syncope and Tumarkin Attacks in Meniere's Disease
They saw that karate players` serebral integration center, integrating somatosensory, visual and vestibular systems, were better than the control group.
THE EFFECT OF SPORT ON BALANCE FUNCTIONS
The study has some limitations, such as the lack of objective evaluation of the vestibular system, the small number of workers and the existence of comorbidities, such as the presence of musculoskeletal diseases.
Effects of a vestibular rehabilitation program on workers in the working environment: a pilot study
Individuals with chronic middle ear disease, peripheral or central vestibular system disease, head trauma, and Benign Paroxysmal Positional Vertigo (BPPV) history were not included in the study.
Definition of Balance and Cognition Related to Disability Levels in Vestibular Migraine Patients
The neuropathological hallmark of PD is the ascending accumulation of a-synuclein immunoreactive Lewy bodies (LB) from SNpc and other brainstem structures to superior brain areas; however, LB deposition has been recently demonstrated in all brainstem fiber tracts and cranial nerve nuclei, including the vestibular system [20].
Pisa Syndrome in Parkinson's Disease: Evidence for Bilateral Vestibulospinal Dysfunction
The area most associated with balance is the region of the inner ear known as the vestibular system. The vestibular system consists of a complex sensory organisation that involves communication between the central and peripheral vestibular systems as well as the ocular system, the postural muscles, the brainstem and the cerebellum to regulate and control balance and sense of motion.
Investigating nystagmus in patients with traumatic brain injury: A systematic review (1996-2016)
Daily stimuli have a higher frequency, and all components of the vestibular system are stimulated (2).
Correlation of o-VEMP and v-HIT Test Results with Caloric Test Results iSn Peripheral Vestibular Disorders
The Vestibular system is responsible for maintaining total body balancing and preventing animal from falling and adapting position of head and body (Garosil, 2007).
Successful Management of Idiopathic Vestibular Syndrome in a Dog
The vestibular system, located deep within the cat's inner ear, consists of three fluid-filled canals, along with receptors that connect to nerves leading to the medulla--a part of the brain situated at its base and attached to the front of the spinal cord.
When they lose a sense of balance: disorientation, darting eyes and tilting the head can result when vestibular syndrome develops
The reciprocity between the vestibular system and brain centers implicated in migraine is further demonstrated in another study, where rotational and caloric vestibular testing triggered migraines more in those with a history of migraine than in those without (49% versus 5%, resp.) [44].
The intimate relationship between vestibular migraine and Meniere disease: a review of pathogenesis and presentation
AGEING Dizziness and unsteadiness are more likely when the eyes, vestibular system of the inner ear and muscles no longer work in harmony.
Dealing with dizzy spells; Experts reveal how to prevent or manage the debilitating conditions that leave your head spinning
Where in the human body is the vestibular system? 5.
Quiz of the Day