an instrument for determining the angular velocity of an object; contains vibrating parts that react to the object’s rotation. There are bar and rotor types of vibratory gyroscope. The sensing element in the bar type is formed by several vibrating objects similar to the bars of a tuning fork. 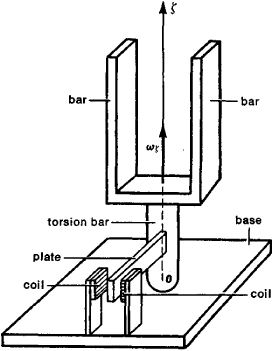 There are a wide variety of possible applications for vibratory gyroscopes; the simplest is their use in measuring the angular velocity of an object. They can also be used in gyroscopic stabilizing systems, inertial navigation systems, and other fields of gyroscope technology.

Feedback
Flashcards & Bookmarks ?
Please log in or register to use Flashcards and Bookmarks. You can also log in with
Flashcards ?
My bookmarks ?
+ Add current page to bookmarks
Mentioned in ?
References in periodicals archive ?
Since then, in the presence of significant uncertainties, the regulated model-based and non-model-based sliding model control approaches are presented to improve tracking control of the drive and sense modes of the vibratory gyroscope in [13].
Ebrahimi, "Regulated model-based and non-model-based sliding mode control of a MEMS vibratory gyroscope," Journal of Mechanical Science and Technology, vol.
Minimal-Learning-Parameter Technique Based Adaptive Neural Sliding Mode Control of MEMS Gyroscope
The cylindrical resonator gyroscope (CRG) is a kind of Coriolis Vibratory Gyroscope (CVG) which measures angular velocity through the precession of elastic waves.
Petrenko, "Technological aspects of manufacturing of compound hemispherical resonators for small-sized vibratory gyroscopes," in Proceedings of the Integrated Navigation Systems, RTO SCI International Conference, pp.
Simulations and Experiments on the Vibrational Characteristics of Cylindrical Shell Resonator Actuated by Piezoelectric Electrodes with Different Thicknesses
They cover smart sensor design, the calibration and self-calibration of smart sensors, precision instrumentation amplifiers, dedicated impedance-sensor systems, low-power vibratory gyroscope readout, DNA microarrays based on complementary metal-oxide semiconductors (CMOS), CMOS image sensors, exploring smart sensors for neural interfacing, and principles and applications of micropower generation.
Smart Sensor Systems: Emerging Technologies and Applications
Lee, "On the mode-matched control of MEMS vibratory gyroscope via phase-domain analysis and design," IEEE/ASME Transactions on Mechatronics, vol.
Link et al., "Cross-coupling of the oscillation modes of vibratory gyroscopes," in Proceedings of the 12th International Conference on TRANSDUCERS, Solid-State Sensors, Actuators and Microsystems, pp.
Frequency tuning of work modes in Z-axis dual-mass silicon microgyroscope
It can be concluded that this novel drive methodology is beneficial for performance improvement of silicon vibratory gyroscopes.
Research on nonlinear dynamics of drive mode in Z-axis silicon microgyroscope
At the Airshow, Innalabs will present high performance quartz Servo Accelerometers and Solid State Coriolis Vibratory Gyroscopes - one- and two-axis INL-CVG-G200/100 and INL-CVG-GU200/100 to the Asian market.
Innalabs to Participate in Singapore Airshow 2012