common herb (Centaurea cyanus) of the family Asteraceae (asteraster
[Gr.,=star], common name for the Asteraceae (Compositae), the aster family, in North America, name for plants of the genus Aster, sometimes called wild asters, and for a related plant more correctly called China aster (Callistephus chinensis
..... Click the link for more information.  family). It is a garden flower in the United States but a weed in the grainfields of Europe. It is called bluebottle or bluet in England and bluebonnet in Scotland; in North America the cornflower shares with other plants the names ragged robin, bachelor's button, or ragged sailor. The long-stemmed blue heads of the flowers, having radiating bottle- or vase-shaped florets, yield a juice which, mixed with alum, has been used as a dye. Cornflowers are classified in the division MagnoliophytaMagnoliophyta
, division of the plant kingdom consisting of those organisms commonly called the flowering plants, or angiosperms. The angiosperms have leaves, stems, and roots, and vascular, or conducting, tissue (xylem and phloem).
..... Click the link for more information. , class Magnoliopsida, order Asterales, family Asteraceae.
The Columbia Electronic Encyclopedia™ Copyright © 2013, Columbia University Press. Licensed from Columbia University Press. All rights reserved. www.cc.columbia.edu/cu/cup/ 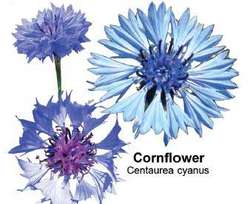