[¦vid·ē·ō′tāp ri‚kȯrd·ər]
(electronics)
A device for video recording and playing of a magnetic tape either in a video cassette or on an open reel.
McGraw-Hill Dictionary of Scientific & Technical Terms, 6E, Copyright © 2003 by The McGraw-Hill Companies, Inc.
The following article is from The Great Soviet Encyclopedia (1979). It might be outdated or ideologically biased.

a machine for the recording on magnetic tape and the subsequent reproduction of the electrical signals of the image and sound track of television transmissions. The operating principle of a videotape recorder is similar to that of the ordinary tape recorder. However, the magnetic recording of video signals, which occupy a frequency range of 6-7 megahertz (MHz), requires a much greater tape speed relative to the magnetic head. In video-tape recorders this is accomplished by the use of a rotating disk with magnetic heads that can move at a rate of 20-50 m/sec at a certain angle to the tape, which moves longitudinally at a rate of 20-40 cm/sec (see Figure 1). 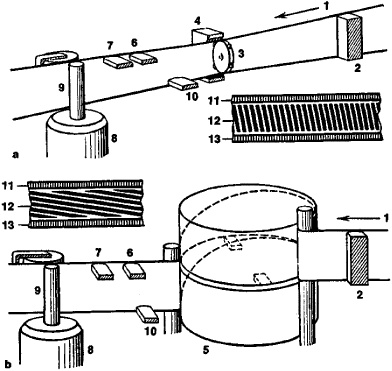 Videotape recorders usually use wide magnetic tape (12.7 or 50.8 mm), on which the video recording tracks are arranged in a slanting pattern. The sound track is recorded by a stationary magnetic head along one edge of the tape. The speed of rotation of the disk with the magnetic heads is synchronized with the tape speed by an automatic control system that uses a control signal that is itself also recorded by a fixed magnetic head on the other edge of the tape; this ensures a constant distance between the slanting tracks (recording pitch) during video recording and the precise centering of the heads with the tracks during reproduction. Since each of the video recording heads comes in contact with the tape during some portion of the head’s complete revolution, an electronic switch that alternately connects and disconnects the heads to the playback amplifier is used to obtain a continuous video signal. To eliminate noticeable distortions in the video playback signal caused by differing head characteristics or interrupted contact between the heads and the tape, the video signal is converted to a frequency-modulated signal before recording. During subsequent playback the video signal is limited in amplitude and fed into a demodulator, where it is converted back into the original video signal.

Videotape recorders of more complicated structure, with four rotating heads, have the best recording and playback quality and are generally used in television broadcasting. Recorders with one and two heads are of somewhat poorer quality (frequency pass band, 2-3 MHz) and are used in closed-circuit television systems and for amateur purposes.

Feedback
Flashcards & Bookmarks ?
Please log in or register to use Flashcards and Bookmarks. You can also log in with
Flashcards ?
My bookmarks ?
+ Add current page to bookmarks
Mentioned in ?
References in periodicals archive ?
The secretary can then either release the door lock or, in a threatening situation, push a distress device that sets off an alarm in the security command center and starts a time-lapse videotape recorder. CSOs view events in real time on a monitor in the five-bay command center, evaluate the situation, and respond accordingly.
Recorder in the court
Onscreen computer images can be displayed simultaneously on a television monitor or sent to a videotape recorder. Flicker filters and genlock/overlay, the later of which adds titling or combines video with computer animations, are other features.
Desktop video goes digital with advent of nonlinear editing
The system can be attached to a single-channel digital, multichannel digital, or videotape recorder.
Video surveillance system. (Marketplace)
For example, using a videotape recorder could constitute illegal wiretapping if the recorder's microphone is on.
Employee privacy versus employer rights: it's easy to invade employees' privacy, and suffer the legal consequences, if you're not careful. Here's how to be careful
Clinical Supervisors frequently use a videotape recorder as an impetus for change in teaching behavior as the student sees the need for change.
Collaboration across Early Childhood Special Education
With its new HDC-F950 camera and SRW-5000 videotape recorder, Sony is introducing an entire new range of RGB solutions for video post-production.
DISCREET/SONY TO DELIVER HDTV PRODUCTION CAPABILITIES
Such inventions as the videotape recorder and its digital successors, for example, give people more control of time.
More valuable than money
In 1951, the first videotape recorder captured live images from television cameras by converting the information into electrical impulses and saving the information onto magnetic tape.
In the palm of your hand: mobile wireless technologies are helping agents and adjusters to be more efficient and also meet the demands for real-time service
At the same time, the migration process itself has been optimised to eliminate stopping and starting of the source videotape recorder (VTR).
Archiving the future: What media storage options are available for broad-casters migrating from videotape to file-based formats? We find out more